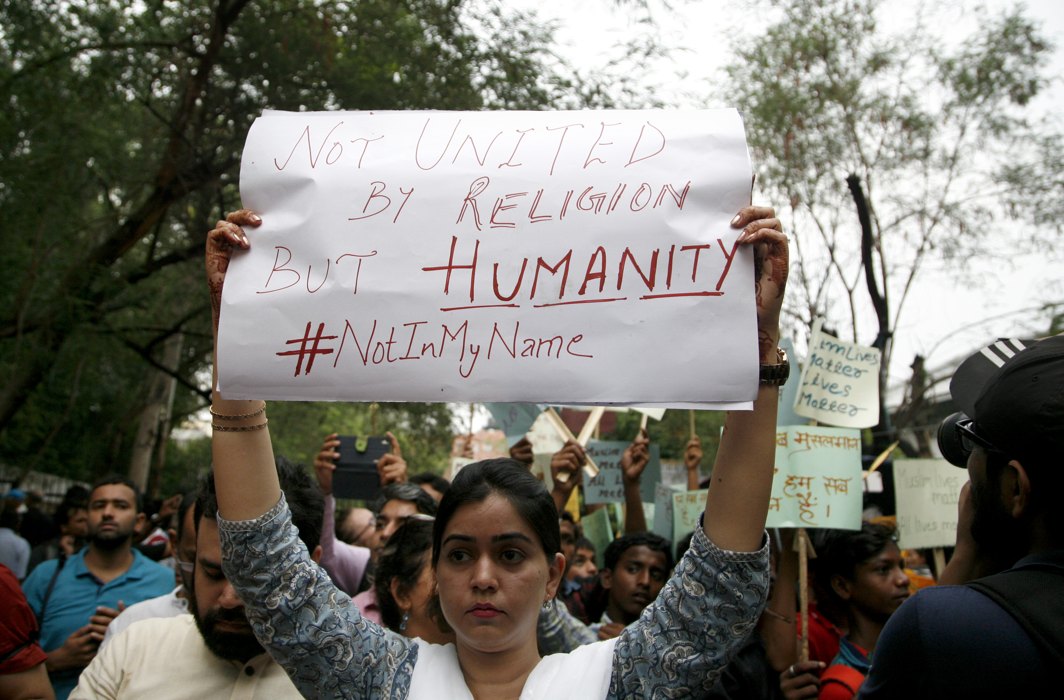 Among the moving gallery of placards during the student protests against the Citizenship Amendment Act, one stood out. It was held up by a young girl and spelled out ‘I am Muslim, Hindu, Buddhist, Sikh, Christian, Jain’, but read top to bottom in colour coordinated alphabets; it simply said ‘I Am Indian.’ Nothing illustrates the mood, the

movement and the message as protest art. They are literally, signs of the times. The advent of social media has given it a voice far beyond geographical boundaries. Thousands of Indians took to the streets last year holding up banners that said ‘Not in My Name’. It was a spontaneous expression of anger and protest against the lynching of Muslims and Dalits. The origin of that powerful phrase actually dates back to the anti-war movement in America in the 70s when two poets compiled the Pledge of Resistance. The poem contained the lines: “Not in our name will you wage endless war.” The catchphrase is now in universal use; British Muslims used it in their campaign to show that they rejected the Islamic State’s ideology and actions and that it did not represent Islamic faith.

With the addition of a hashtag, ‘Not in My Name’ has become a global movement, fuelled by social media. It was seen after the election of Donald Trump when protesters carried banners that said “Not my President’. It found echoes in other parts of the world. Protesters in the UK took to the streets after last week’s election won by Boris Johnson’s Conservative Party, carrying banners reading: “Not my Prime Minister.”  Some protest movements have evolved according to the times. The Women’s Liberation Movement of the 70s created a global awareness of patriarchy and sexism and that striking Venus symbol became a potent weapon of war. Fourth-wave feminism was defined by technology, as the use of social media created a powerful tool to challenge misogyny and promote gender equality. From hashtags like #YesAllWomen, it became the more definitive #MeToo movement after the sexual misconduct allegations against Hollywood’s most powerful man Harvey Weinstein. By 2018 the #MeToo movement had exposed many prominent celebrities accused of sexual harassment and assault. Adding gravity to this, the hashtag #MeToo created a channel across social media in which victims voiced their stories and experiences. Just those two words conveyed what the protester meant, illustrating the power of short and simple slogans.

‘Make Love Not War’ was commonly associated with the American counterculture of the 1960s. Used by those opposed to the Vietnam War, it has been invoked in other anti-war contexts around the world. Perhaps the most famous symbol of protests is the clenched fist, conveying power to the people. It was first used by students in America, and later incorporated into the Black Power movement. At the 1968 Olympics in Mexico City, medal winners John Carlos and Tommie Smith gave the raised fist salute during the American national anthem as a sign of black power, and as a protest on behalf of the Olympic Project for Human Rights. Nelson Mandela also used the clenched fist salute upon his release from prison in 1990 and it was adopted by his followers. Black Power has also evolved into ‘Black Lives Matter’, an international activist movement which campaigns against violence and racism towards black people. Some slogans acquire life and meaning of their own, no matter what the context or location may be. One prominent example was ‘Je suis Charlie’ (“I am Charlie”) a slogan created in the wake of the shooting in which twelve people were killed at the Paris offices of the French satirical weekly Charlie Hebdo. By extension, it became a rallying cry for supporters of freedom of speech and freedom of the press.

In recent times, slogans have become the fuel that sustains movements that face threats and intimidation, most notably the LGBT community, with placards such as ‘Rainbows Reign’ and “Celebrate not Hate’. Threats and intimidation can result in slogans that trigger revolutions, as we saw during the Arab Spring when “Fesh Nestannew?” (What Are We Waiting For?) mobilised young people as did IrHal! a song by Egyptian musician Ramy Essam, which directly translated as “Leave”, aimed at expressing the youth’s anger towards the regime of President Mubarak. “Irhal” famously became the anthem of the protests in Tahrir Square. Now, we have the latest, ‘How Dare You’, the slogan identified with teenage climate activist Greta Thunberg. At the global climate conference that ended in Madrid last week, those protesting at the reluctance of world leaders to do more to save the environment, held up another powerful slogan; it was written on behalf of children and simply said, “We are missing our lessons so we can teach you one.”