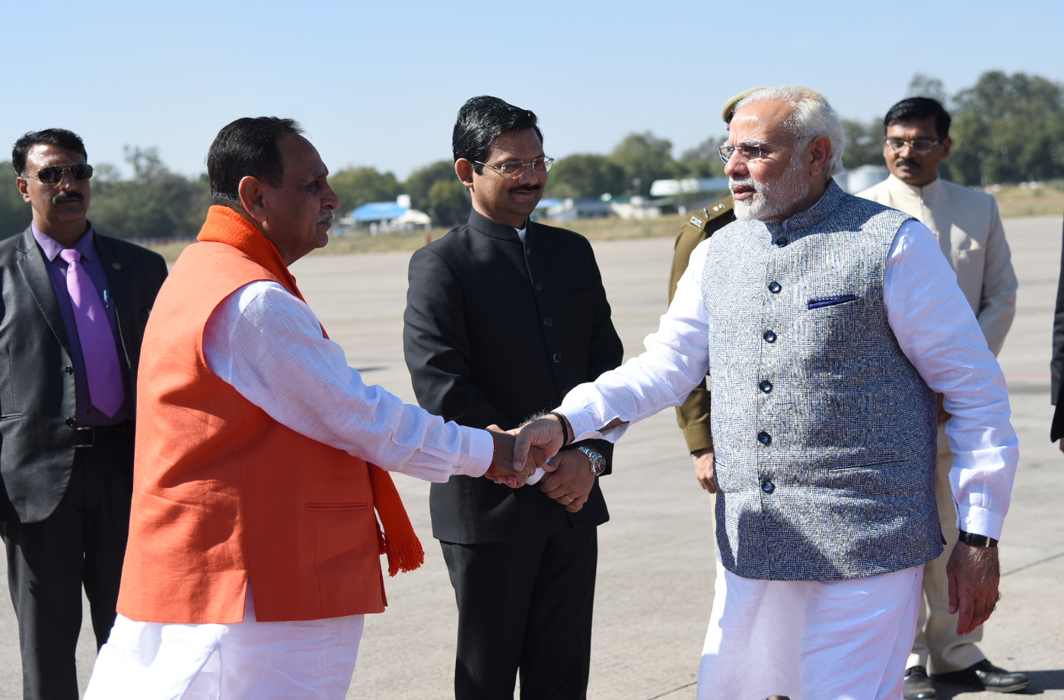 The swearing-in ceremony was attended by Prime Minister Narendra Modi, central ministers and chief ministers of all NDA ruled states

Days after his re-nomination was endorsed by BJP legislators and party’s team of central observers led by Arun Jaitley, Vijay Rupani took oath as chief minister of Gujarat on Tuesday morning. Returning to the state’s top executive’s chair for a second term after leading his party to a narrow victory in the recently concluded Gujarat assembly polls, Rupani also inducted 19 ministers into his council, with Nitin Patel returning as his deputy.

A team of BJP central observers led by Union finance minister Arun Jaitley had, last week, held discussions with the 99 newly elected party legislators in Gujarat and declared that Vijay Rupani and Nitin Patel were the unanimous choice for the role of chief minister and deputy chief minister respectively.

The duo’s return to the roles they had in the previous state government ended speculation of a change of guard in Gujarat which the BJP only managed to retain with a simple majority earlier this month.

The BJP’s tally has been reduced to just 99 of the Assembly’s 182 seats – its lowest ever in Gujarat since 1990 – while the Congress registered a strong revival, winning 77 seats and garnering a 41 per cent vote share. While Rupani won his Rajkot (West) seat by a massive margin of over 53000 votes, Nitin Patel had managed to win from the Mahesana constituency by a narrow margin of just over 7000 votes even as several heavyweights of the party lost their seats in wake of a strong anti-incumbency and massive anti-BJP protests by electorally significant Patidar, Dalit and OBC communities of the state.

In forming his council of ministers – which obviously would have been vetted first by Prime Minister Narendra Modi and BJP president Amit Shah – Rupani has sought to rope in representatives of various communities of the state instead of chalking out a lion’s share of berths for Patels to appease the Patidar community.

Some heavyweights like Porbandar MLA Babu Bokhiriya and Thakkarbapa Nagar MLA Vallabh Kakadiya who held the water resources and transport portfolios respectively in the earlier government have been dropped from the newly sworn-in cabinet.

Bokhiriya had defeated Congress veteran Arjun Modhvadia, albeit by a narrow margin of just 1855 votes, while Kakadiya – a prominent Patidar leader – had scored an impressive third-term victory, winning his Thakkarbapa Nagar seat with a margin of over 34000 votes. However, Kakadiya’s age – he is 73 years old – seems to have gone against him.

While Patel’s have expectedly received a healthy representation – predictably the BJP wants to dent future onslaughts by Patidar leader Hardik Patel – in the Rupani cabinet, the saffron party has also inducted leaders from the Rajput, Ahir, OBC Thakor and Dalit communities.

The Gujarat poll results had shown that while the BJP had faced a rout in Patidar dominated constituencies, it had managed to win several seats by consolidating voters from non-Patidar castes, shedding its traditional votebank in search of a new combine. The Congress on the contrary had done exceedingly well in regions dominated by Patidars while its traditional voters from the OBC and Dalit communities in the state seemed to have split and voted in great numbers for the BJP. The split in the OBC and Dalit votes between the BJP and its political rivals happened despite Dalit leader Jignesh Mevani and OBC leader Alpesh Thakor appealing for votes in favour of the Congress party, whose campaign in the state election had been led by party chief Rahul Gandhi.