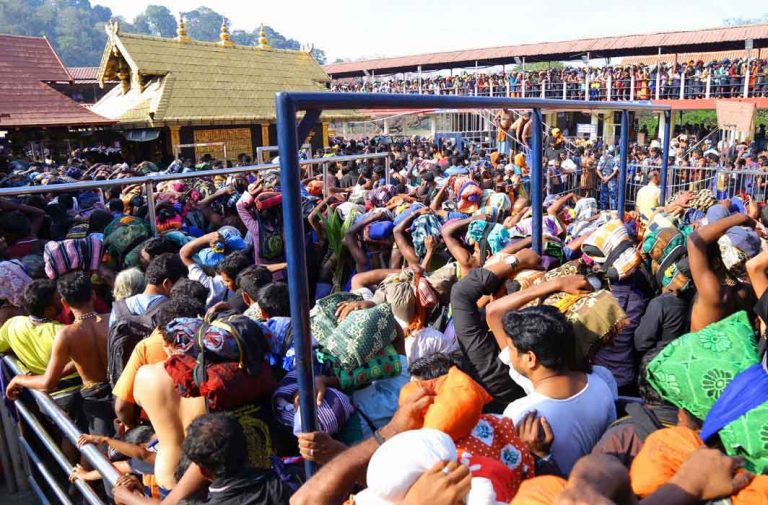 Violence returned to Sabarimala early on Wednesday after two women who tried to enter the temple were stopped by a massive group of protestiors . The women were later escorted back to the base camp by the police. The two women were part of a nine member group who claimed they had observed the 41 day penance and vowed not to return until they had darshan of Lord Ayappa.

About a dozen women have entered the temple, all of them this year though the Supreme Court had ruled as early AS September last year that women of all ages could enter the temple. But protestors and the faithful have ensured no women entered the temple until January 1 this year, when under the cover of darkness and the behind the veil of a women’s wall, the state’s Marxist government and its police escorted two women right into the sanctum sanctorum.

A five member bench of the Suporemne Court was to begin hearings on January 22 on 49 review petitions challennging the Sep 28 order, but these have now been put off as Justice Indu Malhotra, the lone dissent voice in that 4-1 majority verdict is unwell and has taken medical leave/.

“We know that the communists do not respect the Indian history, culture and spirituality but nobody imagined they would have such hatred,” he said.

Slamming the “multiple stand” taken by the Congress and the party-led opposition front UDF in the state, he urged them to clear their stand on the issue.

“I challenge the UDF, clearly state your stand on the issue. Your doublespeak has been exposed,” Modi said, lashing out at his party’s national arch rival. The BJP’s stand on this issue has ‘always’ been clear, he said.

“The actions of our party match our words. If there is one party that has been at the forefront of standing with Kerala and its culture, it is BJP,” Modi said.

Read Also: Woman Who Entered Sabarimala Returns Home, Is Beaten Up By Mother In Law