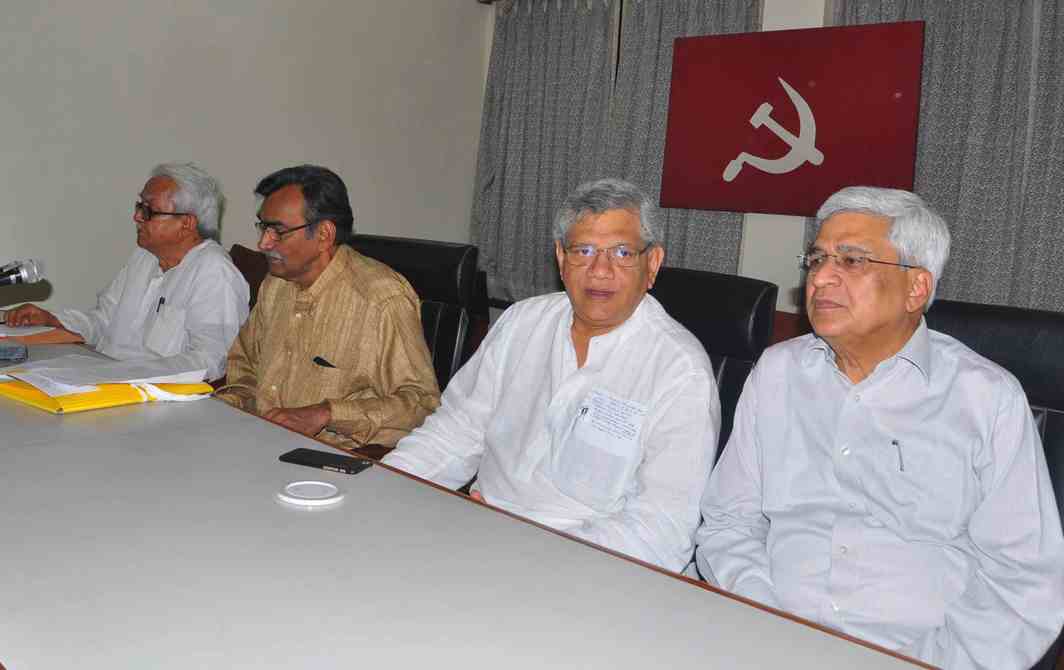 Above: The Prakash Karat (first from right) faction of the CPM denied Sitaram Yechury (second from right) a third term in the Rajya Sabha. Photo: UNI

The result of that could be another split in the already beleaguered party. This seems imminent.

The CPI(M) has seen splits in the past with a number of leaders breaking away to form smaller factions that slowly disappeared from view. Some have taken a more radical view of the current political scenario, such as the Communist Party of India (Marxist-Leninist), but overall their impacts have been less than noticeable. They have merged into background noise.

The dissent was simmering for a long time within the West Bengal CPI(M), especially from the time when, in 1996, Chief Minister Jyoti Basu was denied the post of Prime Minister of the United Front government at the Centre by the party’s central leadership, based in Kerala. While Basu was a consensus candidate for the Prime Minister’s post, the party’s politburo decided not to participate in government, allowing HD Deve Gowda from the Janata Dal to become prime minister. Basu himself later called it an “historic blunder”.

The bigger fallout of that blunder was the induction of Mamata Banerjee’s Trinamool Congress (TMC) within government in the UPA II dispensation. The CPI (M) was truly sidelined.

The CPI(M)’s political bluster in West Bengal in those days was noticeable even in New Delhi, but the all-powerful politburo, the decision making body of the party, probably feared that too much power was being concentrated in a state where the party leadership wasn’t from. That attitude has not changed in all of the 34 years of Left Front rule in West Bengal. The disaffection towards hardline ideologues has only grown within Bengal’s Communists.

Another unloading of ballast from the communist sailboat came when former Lok Sabha speaker and respected CPI(M) leader Somnath Chatterjee was expelled from the party for not agreeing with all the hardline agenda of the party. This left the Bengal comrades red-faced.

Bengal’s Communists, thus, worked from within to foist Sitaram Yechury, a figure more acceptable to the world than the hardline Prakash Karat, to the post of general secretary of the party. That was one victory that did not go down well with the Karat faction. That Karat’s wife (also a politburo member) is Brinda, a Kolkata girl—her sister Radhika Roy is NDTV Editor Prannoy Roy’s wife—has never really made a difference.

Yechury’s elevation left the Karat faction fuming. Hence they struck at the first chance they got, which was denying Yechury a third term in the Rajya Sabha. Not that anybody really has the time to listen to CPI(M) diatribes in an already overheated Upper House these days, but at least Yechury is an orator par excellence and probably the only person among Indian Communists today who can balance a subject and make a point with efficacy. He is also a natural-born diplomat. Bengal’s support to Yechury fell short in numbers, the Kerala presence in the politburo being stronger.

The dissent has now grown into a full-blown revolt within the rank and file of the party in West Bengal. While there is always a scope for a direct deal with the Congress in local electoral strategy, the Kerala faction is against this.

Bengal communists have now decided, it is learnt, that enough is enough. It is time to part.

The decision will be big; as big as the breakaway of the CPI(M) itself from the CPI. But what if it happens? How will the Bengal Communists benefit?

For a start, it will be free of the claustrophobic hardline clutches of the Kerala-dominated politburo. If the local party then follows the policies of former chief minister Buddhadev Bhattacharya, welcoming the fresh air of economic freedom into its system, it could form a collection of people who are no more burdened with a past that glorified poverty for mere intellectual satisfaction.

Then they have to wait. If the BJP and the Sangh Parivar’s machinations can have any effect on the polity of the state, the TMC will crumble. With no industry and no jobs to pacify its supporters, people will eventually plummet towards more radicalised forms of government. However, West Bengal is quite a different kettle of fish as compared to, say, Uttar Pradesh. The Muslim population in the state is at 26-27 percent, while that shoots up to 70-80 percent in the states bordering Bangladesh. The Sangh Parivar’s hardline activities will be met with hardline resistance, resulting in chaos.

If the CPI(M) has the stomach to fish in such troubled waters, the field will soon be left open to disaffection on both sides and a troupe-back to a more disciplined existence with a new-formed regime that was once communist.

That is the line of thought which has now come out of the current CPI(M) crop in the state.

Leaders such as the erudite and eloquent MP Ritabrata Banerjee can one day soon replace existing deadwood and rekindle the faith in a more equitable, secular and less corrupt governance.

Even for a dream and a song, this breakaway is needed for the party in West Bengal. That is what the muted slogans are saying right now in and around Kolkata.