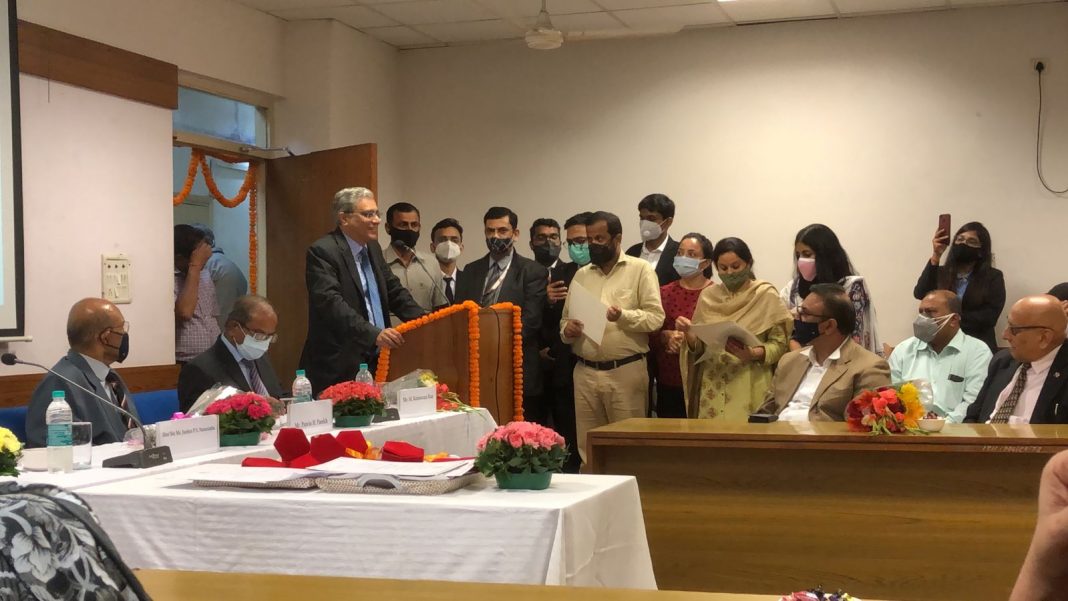 The Indian Society of International Law (ISIL) on Wednesday inaugurated its Post Graduation Diploma Courses for 2021-22 and also, the Convocation ceremony for its 2019-20 and 2020-21 batches.

The event was organised under the guidance of President of ISIL Padma Shri Pravin H Parekh (Senior Advocate) with the Chief Guest being Supreme Court Judge, Justice P.S. Narasimha, who was recently elevated from Bar to Bench and is one of the nine lawyers to ever achieve that.

It was wonderful to see such big names from both sides of law i.e. the bar and bench, and the academy. Along with Mr. Parekh, Prof. (Dr.) YSR Murthy and Prof. D.N. Jauhar who spoke some beautiful things about the accomplishments of Justice Narasimha in his 32 years of practice as a lawyer. What was most striking was to see the Hon’ble Justice talk about the very development of International Law in our country.

Justice Narasimha talked about his detailed experience and what he has witnessed as an Indian Lawyer, who has appeared before International courts representing the Republic of India,

“So much so, the practicality is lacking and if somebody is very keenly interested in doing LLM, Post Graduate, PhD, they remain as academic but to what extent that academic knowledge is utilised in actual resolution of problems? Why aren’t international institutions so easily accessible to Indian Lawyers and Professors?”

He then talked about his experience as the leading advocate who represented the Republic of India in Italian Marine Case before Hamburg-based International Tribunal for the Law of the Sea (ITLOS), an arbitral tribunal under the International Court of Justice.

“When I was part of that team in Hamburg, I was suggesting we should enable through coordination with institutions such as this to identify youngsters, identify those who have been practicing or have interest to develop in the area of international law, must actually be associated with disputes which relate to international forums. This is extremely necessary for us because many disputes arising all over the world adjudicated and decided in different institutions have lawyers mostly from Europe and America, assisting and aiding countries by appearing on their behalf. It is equally possible for all of us to do.”

He then suggested, “We need to develop that ability, we need to expose our youngsters to these institutions, acquire the talent, expertise and create an area where lawyers who would represent international institutions are available and one can confidently resort to them in our country. In this ideal and thought this institution (ISIL) has a great role to play.”

He asked, “What is the alternative for these institutions?”

“To create excellent and great academic oriented studies of International level. You take up topics and issues which concern national and international institutions, develop research, invite papers, create original thoughts and write about aspects which are a real concern of international bodies. That kind of research is necessary. We must be very frank and know that we are deficient in that.”

“There is a lack of interaction between some of the best professors that we have in our country and the actual legal practice. We need to do these conversions and bring them together. Academicians and lawyers must coordinate with each other. Lawyers must go to institutions to teach, professors must also be enabled to participate in national and international institutions for adjudication,” he suggested.

He then explained his diverting thought regarding the two worlds we live in,

“We have proceeded from a situation where global politics initially had the nation’s state and thereafter we have seen both the world wars, cold war, thereafter we had seen that the technological development took place and the world shrunk. We have a global economy. In the context of globalisation, international law had a great impact on it. Incidentally in the modern times we have seen the resurgence of nationalism also. It is civilization which are identifying themselves and individuals are identifying themselves with civilization, so there are two competing values so to say, on the one hand the compelling happening related to globalisation and on the other hand the need and demand of individuals for nationalism.”

He then concluded by saying, “Indian in its ethos, we have assimilated many perspectives, we have let everybody grow, we have let everybody come, take route in our civilization, develop from that. This is an aspect reflected in our constitution also. So this aspect is which is an original thought where India can contribute towards the development of International law coupled with dealing with this aspect of individual, cultural aspiration across the globe, how we have created a unique constitution where there is unity in diversity, where we recognise everybody’s freedom which is the greatest value that we have and let everybody grow together being part of the same very union. This is an aspect which can be replicated in International perspective also.”