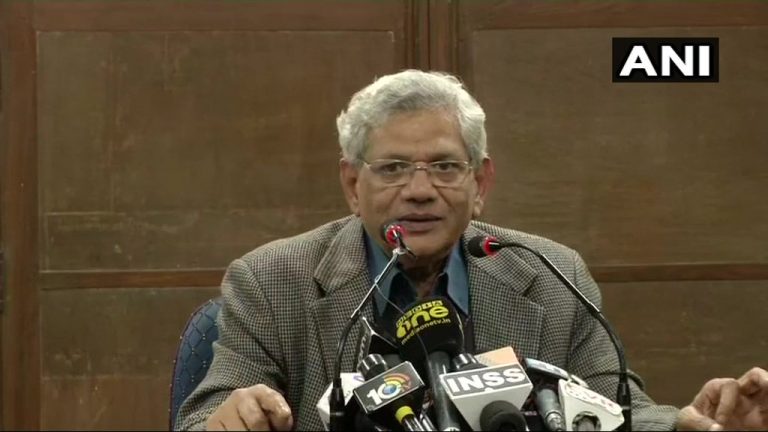 CPI(M)’s Sitaram Yechury on MK Stalin proposing Rahul Gandhi’s name for prime ministerial candidate: “Everyone is entitled to their opinion, we learn from our country’s history. A formation that forms an alternative government at the center comes into existence only post-elections.”

The absence of key opposition leaders like Mamata Banerjee, Akhilesh Yadav and Mayawati at the swearing-in ceremonies of three Congress chief ministers in Madhya Pradesh, Rajasthan and Chhattisgarh on Monday did not go unnoticed. It even triggered speculation that all was not well in the Grand Alliance that is being assiduously sought to be built up to take on the BJP-led NDA in the forthcoming Lok Sabha elections.

Sitaram Yechury, the CPI (M) supremo has virtually confirmed these divisions by stating on Monday that the DMK chief MK Stalin proposal to name Rahul Gandhi as the prime ministerial candidate of the Grand Alliance was his personal opinion. “Everyone is entitled to their opinion. We learn from our country’s history. A formation that forms an alternative government at the centre comes into existence only post elections,” he said. Stalin had two days back at function to unveil a statue of his late father
M Karunanidhi in Chennai proposed Rahul Gandhi as the next prime ministerial candidate saying he has got the “ability to defeat the fascist Modi government”. It was the first time senior opposition figures were together at an event after the Congress wrested power in Rajasthan, Madhya Pradesh and Chhattisgarh in the November-December assembly elections.

Banerjee, who had earlier floated the idea of a central front of regional parties, has not shown the same warmth for the Congress after exchanging bonhomie with Andhra Pradesh chief minister N Chandrababu Naidu, and her counterparts from Delhi and Telangana, Arvind Kejriwal and K Chandrashekar Rao respectively, apart from Stalin. It is pertinent to note that Mayawati and Yadav had shared the dais at the swearing-in ceremony of Karnataka’s Janata Dal (Secular) chief minister HD Kumaraswamy in Bengaluru in May, where a show of opposition unity was on display.