With militants attacking mobile towers in the Valley in an attempt to pulverize communication facilities, half of Kashmir has been cut off from the rest of the world

They are calling it tower terror, a slow yet steady process of Pakistan-backed militants des-troying telecom towers in Kashmir with the intention of disrupting communication services.

On May 31, militants targeted a communication facility in Kashmir by lobbying a powerful grenade at a mobile transmission tower in downtown Srinagar, causing chaos and panic in the area.

Top police officials said this was not a case in isolation but part of a sustained attempt by militants to slowly pulverize communication facilities in Srinagar, which they have managed to successfully do, as nearly 50 percent of Kashmir has been cut off.

The May 31 incident happened inside the compound of Abdul Ahad Haji at Gadoodbagh in Habba Kadal that housed two mobile towers. The explosion damaged the towers partially and also caused some damage to a private car parked there. In the evening, a statement from the police simply stated: “We are investigating the matter and analyzing the nature of the explosive.”

But it is not that simple. It is the latest threat sweeping a state on perpetual boil. This incident came after a series of strikes on communication facilities by militants in North Kashmir’s Sopore and Pattan townships in Baramulla district and Handwara in Kupwara district, leaving two persons dead.

What is triggering this crisis?
Officials of telecom companies in Delhi and Srinagar say that the ultras are extremely upset about “removal” of their communication equipment from mobile transmission towers in Sopore and surrounding areas earlier this month by officials of telecom companies. The companies, it is reliably learnt, were asked by army officers to remove such devices from towers as they were being used by militants for terrorist activities. “We did what we were asked to do,” remarked a senior Vodafone official, speaking on conditions of anonymity.

A lesser-known militant outfit, Lashkar-e-Islam, has already claimed responsibility for the attacks in north Kashmir and asked mobile operators to wind up services across the Valley.

But army officials and police claim the group is not the root cause of the crisis. Police investigations revealed that it was the handiwork of the Hizbul Mujahideen (HM), a dreaded terror outfit in Kashmir.

The HM, however, did not come forward to claim responsibility. Top militants of the HM were aware that blocking communication would cause a great deal of hardship for the locals. Had they claimed responsibility, they would have lost a large chunk of local support. Hence, very cleverly, HM blamed the Lashkar-e-Islam, an outfit that is defunct since March 2015, has no interest in Kashmir and once operated in the Khyber area of Pakistan before all its members joined the Tehrik-e-Taliban in March 2015.

“There is a larger conspiracy; we would not like to reveal everything at this stage,” remarked Police Superintendent Tahir Saleem.

Army officials claim there are more reasons for such acts. Pakistan-sponsored terrorists are trying hard, they claim, to disable all mobile communication in the state ahead of the Amarnath Yatra, considered among the holiest of Hindu pilgrimages.

The militants are frustrated because the local police and the army have busted their communication with their Pakistan backers, who have spent an estimated `25 crore and provided militants with radio devices. These were then planted on mobile towers in Sopore and helped terrorists communicate with their ilk in Pakistan.

Last year, radio devices worth `25 crore were confiscated from militants captured and killed in J&K. On discovering these gadgets on mobile towers, the police took them down, leading to a great deal of anger among the militants. They then called for a ban on all mobile communication in Sopore and other areas.

The terrorists, after targeting mobile towers of private telecom companies, also blasted a mobile tower of BSNL in Habba Kadal, Srinagar, thereby conveying what many claimed was “a strong intent”. The attack worked. It led to five of BSNL’s franchisees shutting shop out of fear.

The militants also went around warning shop owners who were recharging BSNL connections. They have also ensured that services such as Airtel, Aircel and Vodafone limit their operations in the state.

The killing of two people associated with telecommunication business in Sopore and Pattan last month and threats issued to telecom operators by Lashkar-e-Islami has crippled the apple town and other areas of north Kashmir. The militants have asked all telecommunication operators to shut their businesses through posters pasted at strategic locations in the city in the dead of night. This has led to shops selling prepaid cards to shut down, leading to a major communication breakdown. “This is the start of another madness,” remarks Ishaq Jaan, a resident in Srinagar.

Many fear the worst—a possible show-down between the army and militants—in Srinagar and its adjoining towns. The telecom breakdown created a fear among people, who have been forced to relive memories of the 1990s when militancy was at its peak.

People are going back to pre-mobile days and applying for landlines. Many have not been able to talk to their children studying outside the state. According to the police many businessmen complained that they had to travel to Sopore daily due to the disturbed telecom network.

This time round, terrorists have hit at a basic modern day need—to stay connected. 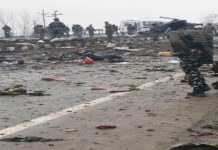 Pulwama Terror Attack: How India and Pakistan are tackling the imbroglio

Is ISIS closing in?