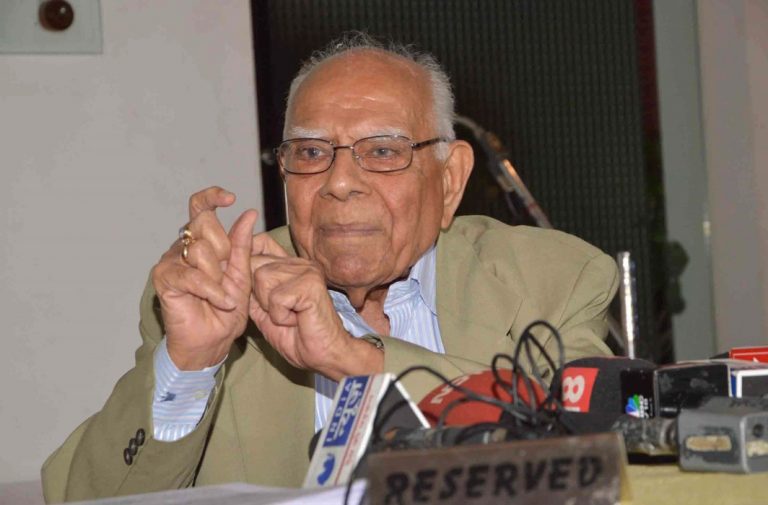 My first encounter with Ram was in the year 1989 when I approached him for a COFEPOSA matter. He asked me in his usual style, “I hope you know my fee in these types of matters”? That was the beginning of a loving relationship for next three decades. Once he met me at the Bombay airport and asked, “What brings you here”? ‘A Customs matter’, I replied, ‘Oh, your forte!’ pat came the response of dear Ram.

In 1992, a few friends, ‘Creative lawyers’, organised a seminar in on ‘Independence of Judiciary’. There was a galaxy of speakers, such as the Chief justice of India, the Chief justice of the High Court of Delhi, Prof Upender Baxi, Murli Bhandare, Justice ML Verma & Arun Jaitley, to name but a few. As a master of ceremony I was baby on the stage. The star speaker amongst us was Ram Jethmalani, and it was he only who could say, in presence of all, that we were flogging a dead horse.

Ram had filed a criminal defamation complainant in Esplanade (Mumbai) criminal court. Obviously, he was a witness and was to be cross-examined. The accused, Chandraswami by that time, rightly or wrongly had developed tremendous faith in me and therefore requested me to take a final call on whatever I felt was right. Because of my great admiration for Ram and as per the instructions of my client I approached Ram to explore the possibility of an out-of- court settlement. During my discussion with Ram I found that at that particular time there was no scope for a settlement for quite a few reasons. So the case had to be contested on merit and that too in the lion’s (Ram’s) den Mumbai, although I always felt that wherever Ram was appearing in any capacity whatsoever, it was his den.

One of the finest judges I ever had the privilege to appear before, A.M Thipsey the then ACMM Esplanade, was presiding over the court. Since I had taken up the case I was determined to do my duty without being influenced by my admiration for Ram. The ever-aspiring message of Bhagwad Geeta, ‘Perform your duty as a true karma yogi without any attachment to people or the result’, gave me great strength and confidence. Even the first hearing was a great encounter since many powerful personalities were present in the court which was jam-packed with lawyers and journalists in addition to intimidating presence of Ram and his competent team of lawyers to be opposed by a baby at the Bar. I took the first offensive step by opposing the very appearance of Ram’s lead counsel, firebrand Lalsinghani as his counsel since according to me he was a likely witness in the matter. The court overruled my objection saying that it was for Ram to decide whom to cite as a witness. But the heat generated during the arguments and counter- arguments gave much needed confidence to me and, above all, to my client and his influential strategists. I really felt on top of the world as a young lawyer.

The next hearing started the epic cross examination of one of the smartest lawyers and the most intimidating witness, in the presence of equally intimidating and knowledgeable team of his lawyers. The presence of other luminaries added to the glamour and pressure in the court. It was a very important juncture of my career, as I came to know later on, which definitely helped me perform in a natural way. During the course of the hearing there were many occasions when we had some heated exchanges, sometimes even an uncalled for confrontation, which of course is a routine thing in the practice of law especially with firebrand lawyers. However, there was not even a single objection on record during the marathon, almost ten hours of cross-examination of Ram spreading over number of hearings. Many times Ram used to warmly hold my hand outside the court as if to convey it at a soul-to-soul level, “Keep doing your duty beta (son).” Luckily to the satisfaction of both the parties and surely to the relief of learned judge the matter was amicably settled in court.

After the case had been settled, whenever I had the occasion to meet Ram he was so much full of love that my admiration for him grew manifold. Not only Ram but even his family members, Rani & Mahesh, his chamber colleagues, Satish, Ashish, Chirag, Saurabh & Pranav, his office staff Sanjay, Pawan, Deepchand all have been very loving ever since I met Ram.

One matter, which has always given me a sense of immodesty, was Bofors matter. Ram had almost finished his arguments on charge when in one of the conferences I suggested him a couple of points. Without batting an eyelid he said, ‘You argue these points tomorrow’. I said, ‘You are on your legs, so better you argue now, and I would be there to assist you’. However, he ordered, ‘No problem, I would tell the judge that you are to argue those points on behalf of one of the Hindujas’. I can never forget that memorable time when Ram was sitting with me, while I was arguing under his guidance.

One day I got a call from Ram, ‘Ashok where are you, I am in a problem, should I come to you or you can come’. I said, sir please don’t embarrass me, I am coming in a few minutes’. Ram told me that he had received a notice for eviction from 2 Akbar Road and he was told that the courts didn’t normally give stay in those matters. I said sir, first of all I request you to move to my flat in Sagar Apartments. However, it was decided that I would give it a try and if we didn’t get a stay Ram might move to Sagar. Luckily we got a stay and we all were relieved because Ram in the meantime got another term of Rajya Sabha.

Another incident about, which I have very fond memories is his election for the post of the president of Supreme Court Bar. I casually suggested that we could have a meeting at Sagar apartments where we could invite a few friends. Ram readily agreed to it and a date was fixed. Ram was literally in tears when he saw a gathering of more than five hundred friends at Sagar Apt. He said Ashok I thought you were inviting a couple of friends at your home. I said ‘This is your love for people and their love for you. I only informed friends that Ram was coming at that particular time. That’s it’

I always joked with him, ‘I wish to be your legal heir only for your Ruhani, spiritual traits and not for any material assets’. He once gave it back to me by saying, “you have overtaken me at least in one aspect’, which I can’t write here but would surely whisper to whosoever wants to know. He would publically say, ‘Ashok is my spiritual Guru’. I know that was an exaggeration more because of his love and wish to encourage me, as I know my limitations.

I contested the election for the post of Secretary; SCBA twice and on both the occasions Ram played very important role in my victory. Ram even recommended my name for some important cases. Imagine a novice like me at times opposed Ram in his personal case, all the same his love for me only grew with time. A few lawyers develop some sort of grievance if someone takes up a case even against their relative but Ram was Ram. He was even willing to help even those who hurt him any time.

We all have experienced many instances in our life, which prove the theory of ‘Beauty of Soul’. The one encounter, which quickly comes to my mind, is about this wonderful soul I had the privilege to interact with, Ram Jethmalani. We all are familiar with his wit, sharpness, knowledge of law and fearless approach, but the other side, which I noticed about ten years back, is largeness of his heart and the beauty of his soul.

The real beauty of the soul of Ram was yet to be revealed. Having said so much about this beautiful soul I must take you to the climax now. I had authored a book for the youth as an attempt to guide them through their stressed and confused period of life and to do my bit for their blissful living. I was contemplating as to who I should request to write a ‘Foreword. I had a couple of nice people in mind that I thought could be excellent motivators to the youth. I went to see Ram and told him about my endeavour. I requested him to write the ‘Foreword’ and give me a date for the release of the book. I left the manuscript with him and promised to come back just after a few days. All that happened thereafter is for you to see in the ‘Foreword’ he wrote which is annexed as Annexure I in my book, ‘Meet Your Soul’. It was on a Sunday that after a hectic flight without even taking rest for a few minutes at the age of eighty-five he dictated the notes scribbled by him in the flight. I love to share with you that the moment he handed over the foreword to me in his office my eyes were moist reading the first few lines. Tears rolled down my eyes on further reading and feeling the love he had showered over me. I really felt great to have decided to request him for the release of the book, since I thought that the real virtue to be imbibed by the youth today is the rare combination of courage and large heartedness, which was there in abundance in this great human being. Ram was a living example of the ‘Beauty of Soul’. He happily arranged everything at 2 Akbar road for the release of my first book, Simple Tips and made a memorable speech. He also spoke at the release of my other two books even if those were to be released by someone else.

My evenings with him were always soulful. I always loved his company and at times the two of us would sit for hours together. He loved to listen to romantic and revolutionary shayri. He was a great lawyer and a parliamentarian. However, above all he was a large-hearted loving soul.

I was lucky to have received his guidance and love for almost three decades. My Salute to this ‘Beauty of Soul’, Ram.

—The writer is Ex Secretary, Supreme Court Bar Association, Motivational Speaker, Author and Law Teacher. He can be contacted at ashokarora2310@gmail.com