As a Tale Wags the Dog

Official “trends” that show India is moving more towards a formal economy, with the unorganised sector shrinking, may have overlooked starvation deaths in the MSME realm. 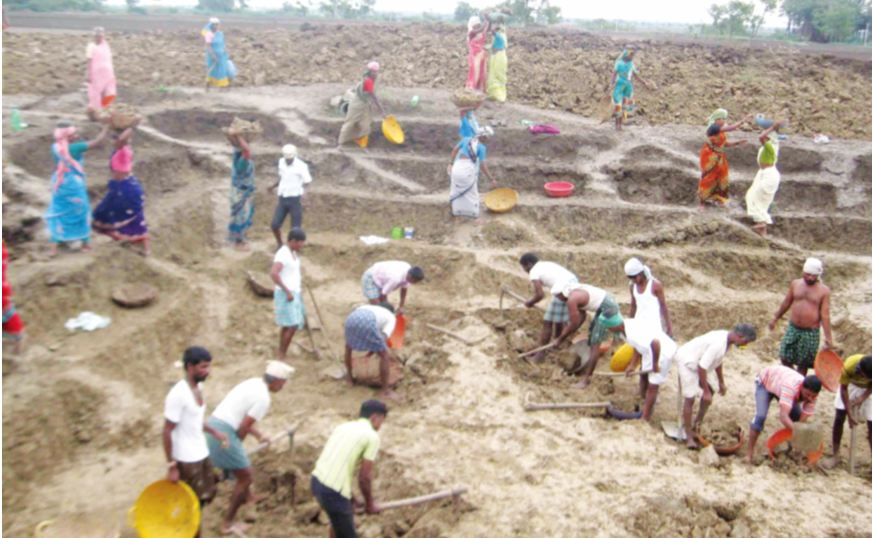 Statistics indicate that India’s “formal” economy is growing now, while the “informal” or unorganised economy is shrinking. Some say it is a good thing, because over time, it will bear fruit, workers will be paid more, there will be more accountability and we will all be in a happy place. Even the International Labour Organisation (ILO) seems pretty much aligned with this thought. In reality, it translates to “let the little ones die, let us use no more cash, let things, people and businesses fall in line, let ‘order’ prevail”. An initial report by an economist—published by The Print—even gives credit for this change to demonetisation and the introduction of GST.

Having dived through that, you need to come up for some air. Let us be blunt: India’s informal economy is not “shrinking”, it is, simply, dying out. There are people who are losing jobs, running out of ways to feed their families; there are small business owners who are being forced to down shutters, not knowing how they will pay off their debts or even wondering where their own family’s next meal will come from. A visit to any of the millions of small business hubs spread across the country—especially those in the manufacturing and travel business sectors—will show the truth, but such “economists” will depend on secondary and doctored data to file “projections”.

Maybe this correspondent harps too much about the MSME sector, but it is a social problem, a problem of a magnitude rarely seen in the history of independent India. We all know the reasons: starting with demonetisation to the GST, to the general slowing down of the economy to the disastrous Covid-19 pandemic and the extremely high fuel prices, all squeezing the life out of the sector. There’s nothing new there. What is new is the biased interpretation of people’s sorrows.

The buying power has been taken out of the hands of the common man. Major industries are holding back on manufacturing, because they hardly have anywhere to sell. The IIP—Index of Industrial Production that shows the growth rates in different industry groups of the economy, a key economic indicator of the manufacturing sector of the economy—has flatlined (see graph below). The government has refused to address this issue, probably because such “economists” point out that what is happening will be good for us: the ubiquitous bitter pill, so to say. Only, this isn’t a life-saving pill; it’s a cyanide capsule.

How did this gem of an idea germinate? It comes from a recent State Bank of India Research Ecowrap Report (November 2021). The headline of the report is as scary as its content. It says: “Share of informal economy may have shrunk to no more than 20% from 52% in FY18.”

The report goes on to say:

“Though the pandemic has led to huge devastating impact on all the sectors of the economy, the impact has been felt more by the informal sector. While the formal sector is almost now back to its pre-pandemic level, informal sector still continues to bear the brunt. In this context, India’s estimate done as of FY2018 suggests the size of the informal economy at 52% of the economy. This number was expressed by NSC… this article estimates that currently informal economy is possibly is at max 15%-20% of formal GDP. There is wide variation across sectors, though, with formal sectors like finance and insurance expanding post pandemic.”

There has been a justification for this, preceding the thunderous announcement. That says: “A sizeable informal economy is not just the issue of emerging and developing economies. For example, as per IMF, even in Europe the informal economy is estimated at 20% of GDP.” (See graph below)

If that justification makes sense—and for the SBI, this would naturally be the preferred line of argument—then one has to remain scared of the intentions of the administration, vis-a-vis the informal sector.

Here is another example of what the report suggests: “The Government has made many efforts for formalisation in the last couple of years. For example, one of the sources to analyse the extent of formalisation is the monthly EPFO payroll report which provides data on establishments remitting first ECR (Electronic Challan-cum-Return) in a particular month. Based on this data we estimate almost 36.6 lakh jobs have been formalised till Aug ’21. Next is the E-Shram portal, which is the first-ever national database of unorganised workers. 5.7 crore unorganised workers (Oct 30/and counting) (sic) have registered in the first two months after its launch, with 62% of workers belonging to the age-group of 18-40 years and 92.0% registered workers having monthly income of less than Rs 10,000. State wise data shows that top 4 states accounted for 72% of total registration, with West Bengal on the top followed by Odisha and Uttar Pradesh. Occupation wise, workers from agriculture sector account for 55% of registration followed by construction sector (13%)…”

Let us clear up the picture a bit. The report says: “5.7 crore unorganised workers (Oct 30/and counting) have registered in the first two months after its launch…” Does that mean that while these workers belonged to the informal sector, they registered because they were suddenly aware of the benefits of the formal sector and wanted to migrate? Did their organisations migrate too? The basic idea being propagated by “experts” based on this report is that a huge number of informal sector organisations have started to mutate into formal sector organisations. Is that even a possibility, considering the state of the economy today, considering that neither credit, nor pending payments have been made available, leave alone new orders? Is it possible that these organisations, stuttering on the brink of shutdowns, are more eager to adopt formalities than trying to save whatever they have?

This correspondent is not arguing with the SBI report. It should have merit. The itch is in the extrapolation generated through publications, showing only one facet of the report.

A report in the Mint (July 28, 2020) quotes a Crisil report titled, “The Epicentre Of An Existential Crisis” which “painted a gloomy picture”. It said that the MSME sector’s revenue growth is seen plunging 17-21% in 2020-21. Operating margins, consequently, will shrink. The daily also said: “A fear of closing down is palpable. India has over 60 million micro, small and medium enterprises (MSMEs) and some estimates suggest that between 10-15% of them could wind up during the year.”

Now apply this figure (10-15%) against the SBI report and you get a sort of parity. The “shrinkage” idea of the informal sector may have been misplaced. Maybe, they all died out. There is no glory in that.

Insolvency is not peculiar to India, it is a financial narrative developed through years of experience and understanding of human endeavour. Insolvency affects every sinew, every joint of a small time business promoter, like slow-spreading arthritis, or Parkinson’s. It is often debilitating. However, that does not necessarily impute the idea of a company as just being an independent entity, separated at birth from its promoters (owners). For the small-time business owner, the company is an extension of extended family, by definition an extension of the love and care reserved for near and dear ones. This is something no bank or financial institution will understand; neither will creditors. Such reports, such biased extrapolations, such economic bombast will kill the inherent entrepreneurial spirit of India; it will kill off the so-called informal economy. No, they will not mutate into “formal” big time enterprises; they will just die.

According to a published research, conducted by Societe Generale, the impact of the pandemic has been almost fatal on small businesses. An economist, Kunal Kundu, has been quoted in the media as admitting that the MSME sector has not benefited much from the government’s stimulus steps such as liquidity and loan moratorium. The result was that these companies have been forced to lay off large numbers of their employees. Bigger companies have not been required to do that.

Understandably, Kundu says that it is imperative to get these companies back on their feet, not only to reverse the employment scenario, but also to get the economy back on track with raised domestic demand. The scarier issue is that these layoffs have not been able to resuscitate these companies. Their margins are squeezed, cost of money is high, the demand is extremely weak and the payments rigmarole persists.

Kundu also points out that now “these businesses are liable to pay consumption tax as soon as they raise an invoice, irrespective of whether or not the invoices have been settled. (It is a settled matter of principle that consumption tax can be rather regressive in nature, like other sales taxes.) Failure to pay goods and services tax, in turn, leads to an additional burden in the form of penalties.” This is a double whammy, something that these companies will not be able to digest.

The “expert” in The Print report does agree that all these manipulations will lead to higher unemployment rates, evident in the rise in demand for low-skill-low-pay MNREGA work. That probably works out better for a certain section of intelligentsia of the country, not for those who care for people. Moreover, such rural employment guarantees do not extend to cities and its suburbs. Also, there is a limit to which the government can subsidise the country. The government’s duty is to create an atmosphere where the individual himself/herself can flourish, enriching the nation in the process. Dole is cheap, dole is pathetic.

The ILO’s position today is as rigid and as unthinking as it has always been. It should be easily understandable that an informal economy will not be able to provide basic wages as applied to the organised sector. It does not have the capacity to.

The muddled thought process of the ILO is evident when it says:

Yet, the ILO votes against the informal sector, as if it is a cancer on the industrial canvas of the country. It says: “The ‘Way out of Informality’ project seeks to facilitate policy dialogue through research, and, at local level, identify best practices that can be replicated and scaled up.”

It is necessary for the ILO to understand that for an economy as old as India’s with its thousands of years of traditions and social bindings, it is not possible to simply impose economic models that may have borne fruit elsewhere. There are limits to which people in dire straits can adapt and change. Forget China, even the US has a sizeable informal sector.

The solution is not in disregarding this informal sector, but in trying to promote it. Just as changes in nomenclature, or a bits and pieces switch to digital payments did not sweep unaccounted money out of the system, the informal economy will not be ousted through legislation, but via reform. That takes time and patience.