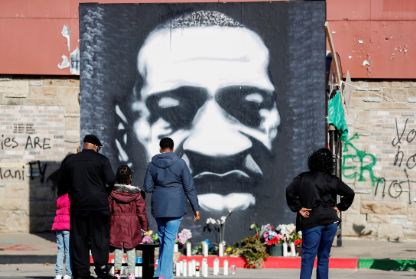 The riveting trial of a police officer charged with the death of a black man by use of excessive force, seen in videos that shocked the world, has lessons for all democratic countries and its law enforcement agencies.

Americans have been watching the first six days of the Minneapolis murder trial of a police officer accused in the death last May of George Floyd, a black man, outside a convenience store where he bought cigarettes with what a clerk felt was a counterfeit $20 bill. Police use of deadly force against black men has gone unpunished in US court trials for decades. This is the case that set off national demonstrations and brought the Black Lives Matter movement to global attention in the last year of the Trump Administration.

The murder trial of police officer Derek Chauvin is not a “who done It” and certainly doesn’t look like the procedural television crime shows on American TV networks. Pandemic and security considerations have removed some of the visual spark from the TV coverage. But what matters most is on full view. This is an examination of how policing in America often uses tactics to intimidate people the police don’t like, which most often are people of color. Unlike shootings at night, this took place on broad daylight outside a convenience store.

Courageous bystanders watched, took video of what happened as officer Chauvin kneeled on a prone and handcuffed Floyd’s neck for 9 minutes and 26 seconds, killing him. Two officers involved in holding down Floyd made no effort to stop it. In court this week the Minneapolis Police Chief did what few chiefs do in testifying his officer was wrong with no ifs ands or buts. “To continue to apply that level of force to a person proned out, handcuffed behind their back — that in no way, shape or form is anything that is by policy,” said the chief, Medaria Arradondo. “It is not part of our training. And it is certainly not part of our ethics or our values.”

His testimony came after two other Minneapolis police officials explained training and procedures. All of this makes the defense lawyer’s job more difficult in persuading the jury that the officer was just doing his job when he pinned Mr. Floyd to the ground with his knee for more than nine minutes.

Chief Arradondo said Chauvin’s actions might have been reasonable in the “first few seconds” to get Mr. Floyd “under control.” However, he said, “Once he was in distress and trying to verbalize that, that should have stopped.” He questioned the need to detain Floyd at all, saying that it would not be normal to arrest a person for passing a counterfeit bill because “it’s not a violent felony.”

The Minneapolis City Council has approved a $27 million settlement for the family of George Floyd. Attorneys for the family called the payment “the largest pre-trial settlement in a civil rights wrongful death case in US history.” In addition to Chief Arradondo, witnesses called so far include the clerk of the store, an off-duty firefighter prevented from giving first aid, and several of the bystanders who took the videos that shocked the world. “I heard George Floyd saying, ‘I can’t breathe. Please, get off of me. I can’t breathe,’ Darnella Frazier testified. Then 17 years old she recorded the events.  “He cried for his mom. He was in pain…It seemed like he knew it was over for him. He was terrified. He was suffering. This was a cry for help….When I look at George Floyd, I look at my dad, I look at my brothers, and I look at my cousins, my uncles, because they are all Black…that could have been one of them.”

Chauvin, 45, has denied charges of second- and third-degree murder, and manslaughter. He faces up to 40 years in prison if convicted of the most serious charge. Three other officers face charges. A strange aspect of what happened is that Floyd and Chauvin knew each other from some security work both had done in nightclubs. The physician attempting to save Floyd’s life at a hospital said deprivation of oxygen (being choked) was one of the more likely causes of death. The prosecution aims to validate that claim. The defense has pointed to complications from drug use and a heart condition. In its opening statements the prosecution said, “believe your eyes,” look at the video.  The defense said there’s a lot more to it than that.

Also Read: Abusing every individual and institution, has a habit to accuse every person: SG Tushar Mehta against Prashant Bushan

In US Courts the prosecution goes first. It has shown bystander videos as well as police body camera video. What happened seems hardly in doubt. The defense will argue the officer’s actions were within training and procedures of the police department. A jury of 12 people plus two alternates is there but cannot be shown on camera. Minnesota law normally requires all parties to agree to cameras in the courtroom. But the judge recognizing the national importance of this particular case ordered the use of remotely operated cameras. A limited number of reporters are revolving in and out of the courtroom and some viewing rooms. Security issues are unusual, involving a 10-foot chain link-fence, razor wire and a tank on the grounds in front of the courthouse.

The trial is expected to last the month of April. According to the National Shooting Sports Foundation (NSSF), a trade organization, Black Americans saw the highest increase in new gun ownership of any demographic in the several months. Several mass shootings, the Floyd trial and the January 6 insurrection at the US Capitol by Trump supporters intent on overturning the presidential election probably spurred gun sales on all sides of the political issues. Real life begins to look more and more like the make believe that constitutes entertainment crime movies and programs.