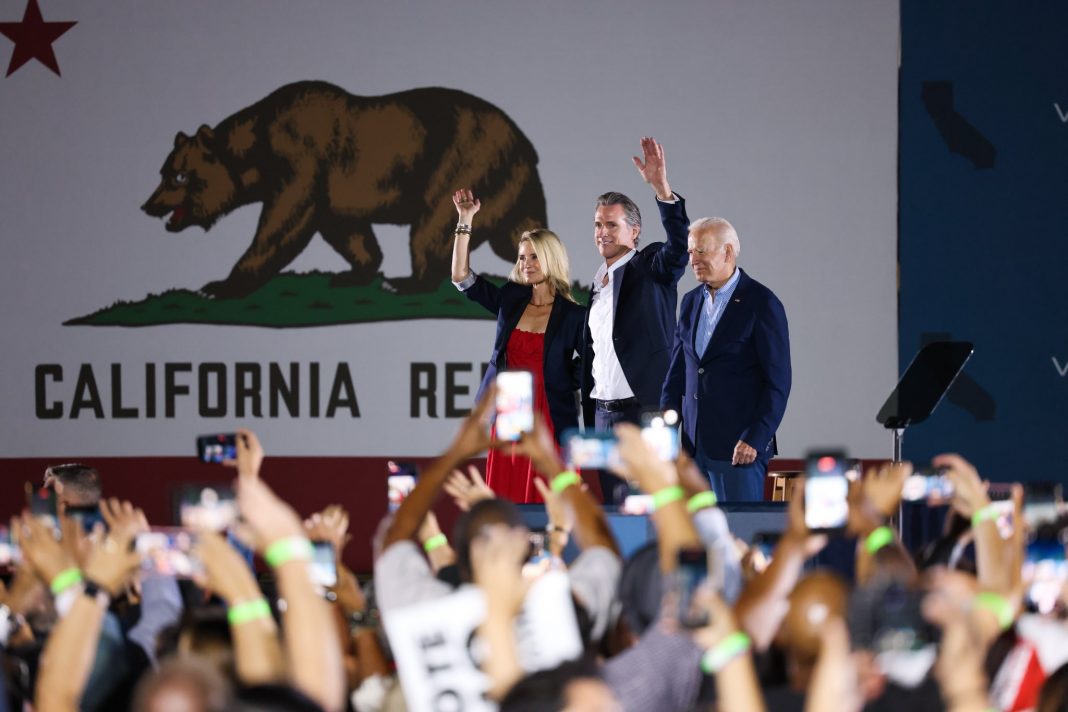 Republican efforts to snatch the governorship of California with a recall election have failed. The idea was hatched by angry Trump supporters in a state where US President Joe Biden beat Donald Trump in the presidential race last year by 30 points.

The Associated Press gave the win to Newsom  about 46 minutes after the polls closed. There was no post-election party for the Democrats. A clearly relieved Newsom said, “In voting no on the Republican-led recall, Californians said Yes to science, we said yes to vaccines. I’m humbled and grateful to the millions and millions of Californians that exercised their fundamental right to vote and express themselves so overwhelmingly by rejecting the division, by rejecting the cynicism.”

The early results, largely from mail in ballots, gave Governor Gavin Newsom an early 62% margin favor of keeping him in the governor’s mansion in Sacramento. This gap got larger despite the  votes from smaller, more Republican rural counties being counted.

The popular governor gets high marks for his management of the coronavirus pandemic, but divided political behavior trumps medical science in many states of the the USA.

Representing a popular theme, Dave Cook, 48, said, “I don’t like the whole recall process.”  He lives near Oakland in the Bay Area.  “I’m not a Gavin fan, but he doesn’t deserve to be recalled, and he doesn’t deserve to be replaced by the people that’s calling for the recall. I mean, they’ve lost every single election, you know, by, what, 5 million votes when Trump was here? So, you know, get your game up, and convince people that you’re worthy, versus doing a backdoor type of disruptions.”  He wrote in local basketball hero Steph Curry for governor in the event of a runoff.

There are 22 million potential voters in California, the most populous state. Newsom was elected three years ago with 60% of the vote. Democrats have had an absolute majority control of both houses of the state legislature since 2015.

The recall law posed two questions for voters. Should Newsom be recalled? If more than 50 percent of the voters said yes, the top vote-getter from among 46 candidates, about half of whom were Republican, would be the governor. So with something like 20% of the vote a person could win this election and serve the remainder of Newsom’s term until January 2023 when it ends, giving a new meaning to minority rule.

Only 20 states allow for recall of election officials at the governorship level and none are easy to win, which made California attractive to Conservatives upset about the pandemic and the Trump loss. Newsom had taken strong steps against the pandemic with masks, business and school closings, and these decisions offended the right wingers in California. Public health law in the USA has almost always given government control in medical emergencies.

About 30 percent of voters in California’s election named the coronavirus as the most important issue facing Californians, according to preliminary exit polling. That ranked higher than the roughly 20% who said homelessness. Slightly fewer said the economy or wildfires were the state’s most pressing issue, with fewer still citing crime.

About 70% of California voters said they supported California’s mask requirements for students in schools, according to early exit polls. About onethird said that getting vaccinated was more of a public health responsibility than a personal choice.

California voters have sent several actors to the governor’s office— Ronald  Reagan and  Arnold Schwarzenegger— so the idea that  right wing radio host  Larry Elder would top a list of 46 candidates does not surprise anyone.  Elder has taken the Trump playbook to heart, complaining about voting fraud weeks on advance of the election. It didn’t work for Trump and it did not work for Elder.

Early analysis suggests this year’s recall electorate appears slightly less Democratic than in 2020, when Democrats made up 50 percent of the electorate according to exit polls. However, the share of Republicans is slightly below last year’s 30 percent mark. The share of independents is up about 10 percentage points from last year’s general election.

Ideologically, 40% of all voters say they are moderates and are not committed to either mainstream party, with exit polling suggesting the hard-core Trump voters have a real problem.

In a suburb of Oakland, Nai Saele, a teacher in her late 30s, put the coronavirus pandemic at the top of her list of current concerns. She voted “no” on the recall and did not vote for a replacement candidate, because she didn’t like any of them. “He [Newsom] only has a year left, so I don’t see the point in recalling him, and honestly I like everything that he’s done so far as far as the way he’s handled covid, and, so, I support him,” she said.

Losing California was a nightmare scenario for a solidly Democratic state, forcing voters to close ranks

Several months ago the early enthusiasm for a recall based on the the measures Newsom used in dealing with the pandemic, caught the attention of Democratic heavyweights. Losing California was a nightmare scenario for a solidly Democratic state. The spectre of a partisan attack by Republicans  motivated Democrats as did the high vaccination rates in California. Some analysts suggested its election might reveal issues that would work well in the November 1922 mid-term election. In the last two months prominent Democrats and others have criss crossed California on behalf of Newsom.

Speaking alongside Newsom in Long Beach on Monday, President Biden called Elder “the clone of Donald Trump”.“Can you imagine him being governor of this state?” Biden said. “You can’t let that happen. There is too much at stake.”More than 40 candidates are running against Newsom.

Elder, for his part is an African-American with Libertarian political credentials, who has been open in his admiration for former president Trump.

Progressive Republicans  of the sort that elected Theodore Roosevelt President in the first decade of the 20th century, passed the recall provision in 1911 as an effort to curb the power of the railroads. Today these tools have taken on new meaning for political parties.

In Orange County, preciously a solid Republican stronghold of more than 3 million people, the notion of voter fraud is a big discussion point. Many Republicans there have told reporters they may not believe the results if the election is close.

Close or not, there has to be a noisy Republican response because election fraud— for which there is no solid evidence—is the chief grievance of the Republicans, especially former President Donald Trump who nearly a year after losing keeps insisting he did not lose.

An unspoken advantage for Gov. Gavin Newsom is that he is from San Francisco. Very high turnout there helps its politicians stay in office — Newsom, Kamala Harris, Dianne Feinstein — have long dominated state politics.