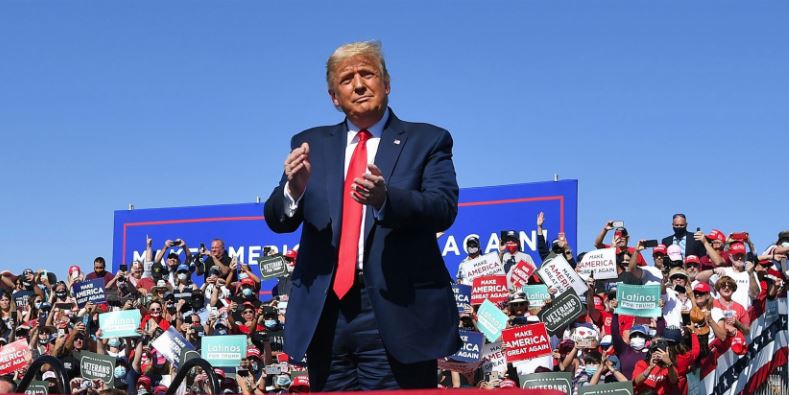 The Trump Administration lost the US presidential election popular vote, the Electoral College vote, and then lost 59 court cases trying to overturn the defeat that signaled the end of a controversial president. The president’s unwavering belief in a compliant judiciary and using the cheapest lawyers available did not save him. Instead he doubled down on a bad strategy by attacking the courts and the “faithless” judges he had appointed expecting fealty not legal reality.

Unwilling to accept the traditions of a democracy, his effort is to delegitimize President Joe Biden while raising hundreds of millions of dollars, ostensibly to fight imaginary election fraud before leaving the White House on 20 January 2021. Those few Republican officials who have publicly rejected his claims of fraud have earned criticism by the president and physical threats from among the most disappointed Trump supporters.

Battling a pandemic you cannot see or solve easily is not just an American political problem, but also a global issue. The inability of governments to mobilize both resources and public opinion on a community response reveals the thin thread of rational civility that ties many nations together.  When medicine gets politicized people die as needlessly as in an unexpected natural disaster.

This profound failure of the American democracy didn’t start with Donald Trump. The roots are deep in the anti-Communist fear mongering of the John Birch Society back in post-WW2 California, an alternate reality fever that birthed political careers for both Richard Nixon and Ronald Reagan.

Now, 70 years later, death dominates the news as the USA staggers toward 400,000 COVID-19 virus victims by Inauguration day in January. Global infections increase, helped by a decrease in emotional endurance for lockdowns and restraints on personal behavior. Political leaders use sycophantic media and social network friends to convince supporters this is an overblown crisis driven by media organizations opposed to Trump.

It is the infectious feature, apparently increasing by mutations of the virus that has filled hospitals in the US. The threat is serious health rationing as Intensive Care  (ICU) beds become unavailable. Cold weather and more time indoors is not helping because people can’t resist socializing, thus ignoring masks and social distancing as preventative measures.

This reporter’s son is finishing his senior high school year sitting in his room in front a computer for on-line classes. College next year might be the same. Is this desirable? Certainly more than dying. He’s getting to spend more time with his parents than he or we expected.

How, you might ask, can a nation that spends trillions of dollars annually on “defense” which it defines as the military– with all the weapons and science derived systems– cannot focus on combating a medical pandemic killing citizens and economic activity.

For all of its expertise, political appointees at multiple levels manage the federal government. If the president believes it will alarm people to describe worst-case scenarios, then nothing happens quickly or effectively. We saw this in 2017 when the federal emergency response to hurricanes was ineffective and late. All the efforts by the Obama Administration to create proper response teams including leaving a detailed pandemic playbook for the incoming Trump Team were ignored. The indelibleresult was President trump tossing rolls of paper towels like a sports show host in Puerto Rico in 2017: Just a short step to lying about the COVID-19 virus.

Indians and people around the world need to understand that almost half the adults in the USA  are not upsetwith the president. His approval rating has actually crept up since the pandemic, but still remains below 47 percent. Although 70 million people voted for him, other Republicans on the ballot won in states he lost. This is evidence that politicians who have enabled Trump’s destructive behaviors escaped punishment, demonstrating the lack of rational thinking that fosters a refusal to believe COVID-19 is real, not withstanding what people read or see.

The virus of mythicalCommunism in American government of the 1940’s mutated into what conservative Americans believed as spoken by Ronald Reagan. He went from being California Governor to US President in 1980 on the basis of a philosophy that remains integral to today’s Republican perceptions of responsibility:

Reagan was an actor with a subliminal grace underwritten by good speechwriters. The same cadre of Republicans, disappointed by Richard Nixon’s failed presidency, did recognize the time had come to swap fervent anti-Communism for a sustained attack on our own system of government lest it equalize treatment of all its citizens.

The solution to the threat of Soviet Russia was influenced, believe it or not, by the 1977 movie, Star Wars. A massive fake campaign was designed by the US government to make the leaders in Moscow believe the American military had weapons of incalculable power making resistance to capitalism impossible. Internal stresses in the Soviet Socialist Republics were at a breaking point at the same time. As Reagan was leaving office in 1988 the wheels came off the Soviet train and Eastern Europe ran off the rails. Authoritarian leadership has resumed in the last decade in many of those nations.

The Republican Party, well aware that demographics would undermine their ability to win elections as a minority movement, understood that demonization was an essential political weapon. So the war against a government “for the people” became a war against people who depended on government.

Terrorist attacks on the USA early in the Administration of George Bush provided a demonisation target that brought war and destruction to the Middle East. Fast Forward to the Trump election in 2016 and immigration to the USA from Central and South America became the first of many demonization targets.

It is interesting to note that the nations that have done the best job of containing the virus are mostly lead by women, which is only one critical factor. Another marker is nations with low levels of demonization as a political weapon: Taiwan, Korea, New Zealand, Singapore and Australia.

Surfacing now in the most fervent Trump circles is the idea of state secession, breaking up the union with a concept that failed in 1860. While many of the wanna-be civilian soldier militias think it’s a good idea they miss the reality. Leaving would bring an economic implosion and massive outflows of capital and disrupted lives. It’s mostly a cover for the obstructive behavior that has marked several moments in American history, most recently the 2009 Tea Party movement.This was a war ofattrition inside Congress with the weapon of  “no” to embarrass and cripple the plans of Barack Obama, a Democrat and the nations first black president.

Almost all of Trump’s life has been within an alternate reality driven by self-created myths of his powerful personality and business skill. Perhaps he needs to remember the Greek myth of Icarus whosewaxwings allowed him to fly until, getting too high, the sun melted his wings and the fall killed him. Without the privileges and protections of the presidency, Trump is about discover his perceived power has diminished, not just his use of Air Force One.