US Elections: The Legal Tangle 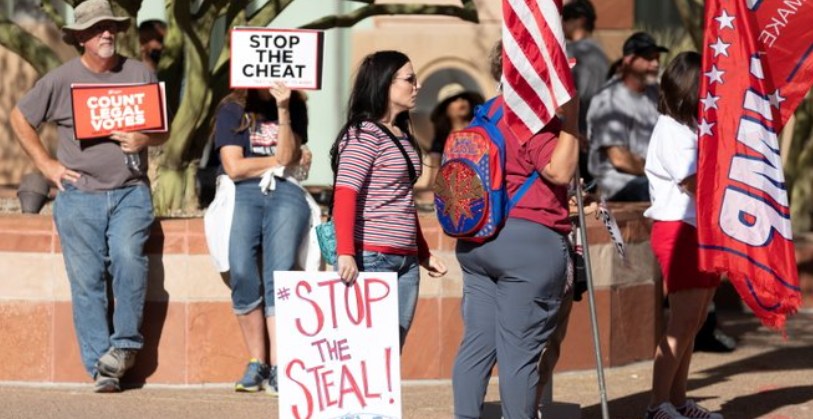 The nation and the world watch in disbelief as America’s Presidential Election turns into a never-ending story about the final result from more than 143 million votes.

By Friday morning (06:30 IST)–two full days after the election– there is still no president-elect. Four states continue to count paper ballots. Democratic challenger Joe Biden has the edge in two western States– Arizona and Nevada– and if this holds he becomes the 46th US President regardless of what happens in two large eastern states, Pennsylvania and Georgia. It is all about mail-in votes that use paper ballots, slowing the counting process. President Trump has criticised mail-in balloting for months with little factual basis. The reason more Democratic voters used them than their Republican neighbours might be the fault of the President’s rhetoric.

Biden has repeatedly called on people to be patient, saying, “Democracy is sometimes messy.” On Thursday, he told reporters “every ballot must be counted.” President Trump called a news conference at the White House, where he claimed “illegal” votes, secret counts and forces were working to “steal” the election from him. At one point, the three US TV Networks cut away from the conference because the presidential rant was without facts or specifics. “It’s amazing how those mail-in ballots are so one-sided,” he said at one point, without any sense of irony that his war on mail-in voting pushed Democrats and Republican voters in opposite behavioural directions.

Trump’s campaign pressed ahead with lawsuits challenging the validity of the count, and protests erupted in cities and outside some elections offices.

Support for the president at his favourite network news desk seemed to evaporate. Fox News politics editor Chris Stirewalt said of the Trump campaign’s legal challenges: “Lawsuits, schmawsuits — we haven’t seen any evidence yet that there’s anything wrong.” Biden has nearly a 4 million popular vote lead over Trump, but that is meaningless because of the two-stage system used since US Independence more than 227 years ago.

When it comes to contested election law, if you are on the winning side, the law can’t move slowly enough. If you are losing, it cannot move fast enough. A network of Republican election law specialists have gone into multiple courts for several days filing suits in behalf of Trump. That might sound serious, but remember anyone can file a lawsuit. Bringing an issue to court doesn’t require evidence of actual wrongdoing.

Pennsylvania provides a good sense of the legal approach. A lawsuit filed in state court by the Trump campaign claimed that observers were not able to “meaningfully” oversee the count, and asked for the count to be stopped. Denied. A state appellate court issued an order guaranteeing that GOP ballot observers can watch the process within six feet. The order did not stop the count in Philadelphia.

Another lawsuit in state court by the Trump campaign and the RNC that tries to move up the deadline for when mail-in voters with missing ID information would need to provide that information. Another filed by Pennsylvania Republican candidates and voters, involves ballots that were corrected during the initial ballot-processing (“pre-canvassing”) period on November 3.

A federal case filed by a Republican candidate objects to the process of “curing” or correcting problems with mail-in ballots in Montgomery County, just outside Philadelphia. The judge in the case seemed sceptical that the Republican claims had affected the integrity of the election.

The Trump campaign has asked to intervene as a party in the Supreme Court litigation over Pennsylvania’s ballot-receipt deadline, which was extended to Friday by the Pennsylvania Supreme Court. The US Supreme Court has declined twice to overrule the deadline, but several conservative justices indicated that they might be willing to revisit the case.

Generally, the same legal tactics are being used in the other contested states.

Did you find apk for android? You can find new Free Android Games and apps.
Share
Facebook
Twitter
Pinterest
WhatsApp
Previous articleVideo: Supreme Court directs Centre to ensure smog free Delhi, SC summons Maharashtra Assembly Secretary for intimidating Arnab Goswami, SC gives ultimatum to builders in Maradu flat demolition case
Next articleYatin Oza case: There is a parliament, an executive and a judiciary- if you say everything is wrong, then there is anarchy, observes Court