America steps out to vote 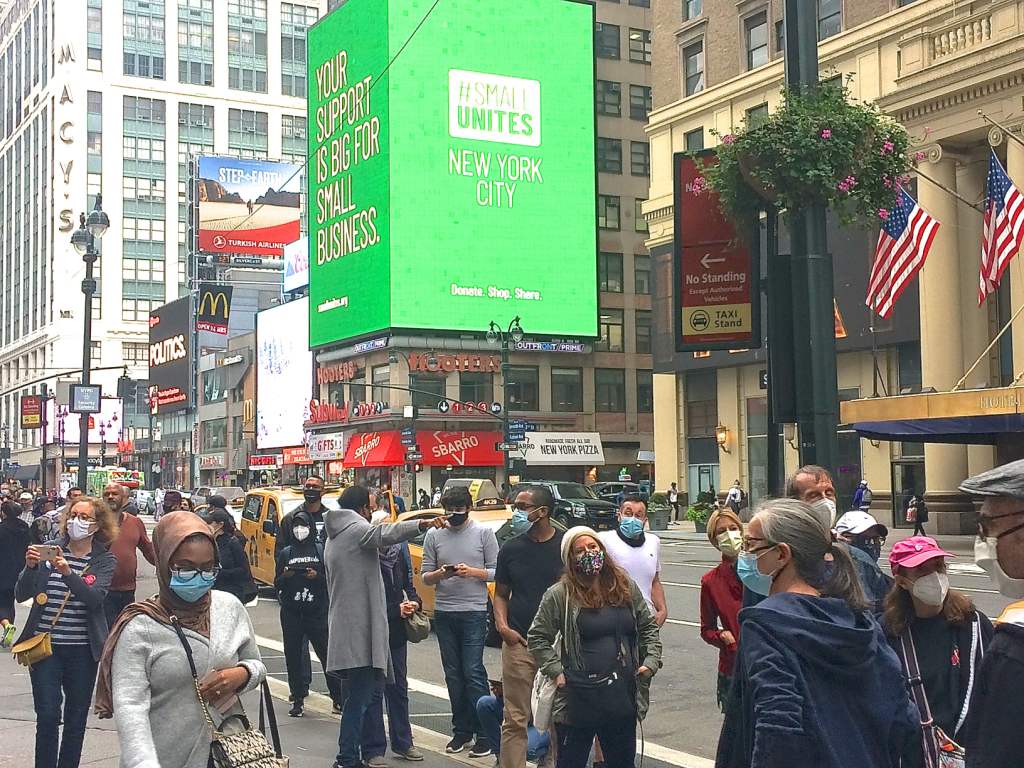 Seven months of living a life with no place to go to for work, a meal, holiday or even a visit with grandmother, Americans are finding a new destination—the place where they can vote. This has brought out extraordinary numbers of people in states, such as Florida, Michigan and Wisconsin. Early voting turnout has already reached 20% or more of the total turnout for the 2016 election.

New York State opened this weekend for early voting and in New York City, tens of thousands of people waited quietly– perhaps stoically– and socially distanced on day one for their chance to participate in a basic responsibility of a democracy.

At the famous Madison Square Garden sports complex in midtown Manhattan, the lines snaked two-city blocks up Seventh Avenue and then down a side street. The owners of the sports teams– basketball and ice hockey– that usually play there could only dream of such fan loyalty.

This is New York City, where more than 300,000 people involved in theatrical and club entertainment are out of work because of closures from the pandemic. Broadway theaters are dark. Performers want to perform and so they did outside the Garden:

Around America, early in-person voting and mail-in ballots are at a level never before reached. Estimates are that perhaps 50 million votes have already been delivered. In a usual national election 130,000,000 votes are cast, but this year for myriad reasons, many of which are obvious, the total vote this year in President Trump versus Joe Biden contest it is likely to top 150,000,000.

Why is this year different from all other years? You might ask. The voting intensity represents a polarised nation battling a medical pandemic it cannot seem to bring under control. Infectious cases are up to a record level of 85,000 a day across the nation, which is not perceived as “rounding the corner” as President Donald Trump proclaimed in debate and speeches this week.

For Americans used to speed in every aspect of life, be it fast food or highways, easy on-line delivery for almost anything in 24 hours, the past seven months have been a lesson in patience, as well as a humbling and revelatory lesson about “exceptionalism.”

The death of more than 230,000 people from Covid-19 and unemployment in the millions from a crippled economy does impact people’s behaviour. That some people–mostly Trump supporters–are willing to cite the toll, as acceptable collateral damage doesn’t make it so for millions of others.

Voters said they wanted the experience of going somewhere to accomplish something, and voting early seemed the best, if not only, choice.  One young woman reading a book while waiting agreed she would probably finish the last 100 pages before she got inside to vote.

It was a warm and windless day in New York. The crowd was predominantly masked with an occasional person– almost always a male– without a mask.  The average wait in line seemed to be three hours or slightly more but the legendary impatience of New Yorkers was nowhere to be seen. Street vendors set up across Seventh Avenue seemed to be doing very little business, except perhaps for the food trucks.

President Trump in this week’s debate called New York a ghost town because of government-ordered restrictions on business and personal behaviour. Ghosts apparently can still line up and vote.

Trump’s home town where he grew up and created his reputation as a businessman, extraordinaire, is less impressed than it might have been 30 years ago with his performance and has largely voted for Democrats anyway over the last half century. The state’s top legal official is suing Trump and the city’s district attorney is pursuing Trump for his tax records.

However, while Trump’s supporters are fewer here than elsewhere around the nation, some did show up, driving by the long lines and using bullhorns to shout at the voters about how Trump will still be president after the election.

Technically correct, because there are 11 weeks of “transition time” between the election and the inauguration, so even if Trump is defeated he remains in the Oval Office until January 20, 2021.

For weeks at his rallies his constant refrain is that the only way he can lose is in a rigged election. These comments as well as his efforts to delay or disrupt mail in voting, energises voters of all persuasions. All the pre-election polling suggests that Biden, the Democrat, has developed a significant 8 to 12 percentage point lead on Trump. However, the dual-level American system, called the Electoral College, makes the state where you win the vote more important than the national total of popular vote. This is how Hillary Clinton won by 3,000,000 votes nationally but lost the 2016 election.

That memory, kept alive by the Trump Administration’s behaviour at home and abroad, amplified by supportive media and social network messaging, has prompted people — For and Against–to vote who usually sit it out on the grounds that it makes no difference who is in charge.

This year, apparently, it does