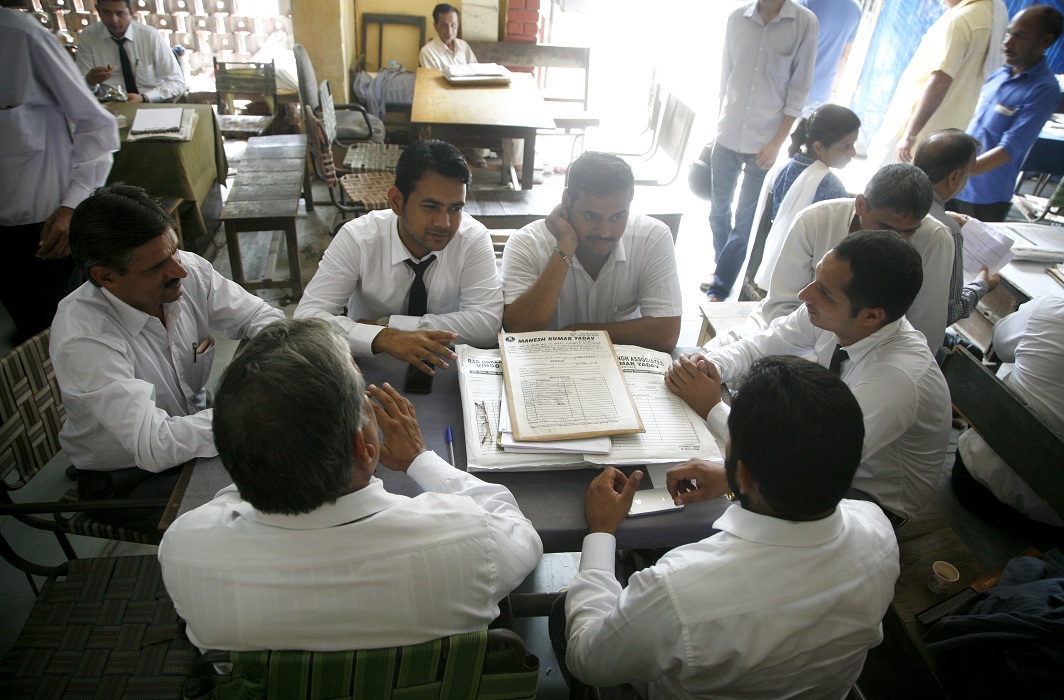 Above: Lawyers at Gurugram District and Sessions Courts/Photo: Anil Shakya

Unlike other public services, the judiciary gets less meritorious candidates due to frustrating procedures and inefficient practices. With All-India Judicial Service, productivity and quality of services at the district level would improve remarkably

For a long time, judicial reform concerned itself with the problem of delay and pendency in the system. This continues with no solution in sight. Of late, the issues relating to judicial appointments, judicial activism, judicial accountability and digitalisation engaged the attention of stakeholders. Several committees and commissions appointed by the government from time to time have made recommendations to set the system right. However, many of them remain unimplemented. It is business as usual in the judiciary despite mounting arrears and reports of creeping inefficiency and corruption, alienating the public who now look for alternatives for access to justice.

A judicial system consists of three elements—laws, institutions and the personnel involved. Laws and institutions are not self-executing and it is the personnel who make the system deliver. The inadequacies of laws and institutions, to a large extent, can be overcome if the personnel who man the institutions are competent and motivated professionals. If judicial reforms are looked at from the above perspective, there can be no doubt that the single-most important step to put the system on the right track is to induct meritorious people in adequate numbers to preside over courts and tribunals. The National Judicial Appointment Commission for the higher judiciary and the All-India Judicial Service (AIJS) for the subordinate judiciary are, therefore, the twin strategies to get the system to deliver both on quality and quantity.

The First National Judicial Pay Commission (Justice Jagannath Shetty Commission), inter alia, recommended the introduction of AIJS at the district judge-level after detailed deliberation with all stakeholders for increasing efficiency in the system. The Supreme Court accepted the recommendations of the Commission, including the AIJS proposal. According to media reports, all state governments, except Tamil Nadu and West Bengal, at that time accepted the AIJS proposal. Unfortunately, the then central government did not take necessary follow-up action and let the proposal die a natural death. It was pointed out in legal circles that certain High Courts were also not keen to have the AIJS as they thought that their control over the subordinate judiciary would get diluted in the process. The Bar, which has been vocal in its opposition to most proposals of reform in the judicial system, did not raise any objection to the introduction of AIJS. A very significant reform which would have made a big difference in the administration of justice at the district level was thus buried by the neglect and indifference of the Union Ministry of Law and Justice, which now wants to revive the proposal after nearly three decades!

In 2011, the Government of India set up the National Mission for Justice Delivery for a five-year period with a view to eliminate delay and arrears and to modernise judicial processes with technology and management reforms. It is understood that the Mission’s life is extended up to 2020. In several meetings of the Mission Advisory Committee, the AIJS proposal was raised and recommended for early introduction. It was the unanimous view of all those involved that efficiency, productivity and quality of services at the district level would improve remarkably with the adoption of AIJS.

Given the regular supply of talented law graduates from National Law Schools and similarly placed institutions, there are now in the profession, advocates with seven to ten years of practice experience who would be inclined to join the district judiciary as they have a chance to get promoted to the higher judiciary in reasonable time. They don’t have to retire as district judges if they show good performance at the district level. The job profile and status in the judiciary are certainly more attractive than what is on offer in other central services.

If the judicial academies give proper training and High Courts provide the freedom within identified parameters to innovate at work, district judges’ efficiency will increase considerably and this would reduce appeals arising from their decisions. For motivated young men and women, job satisfaction and personal reputation are more important than money and power. They are less likely to become corrupt as they consider their professional career more significant than anything else.

Bar-Bench relations are also likely to change for the better, a desirable reform in the present circumstances. So-called language barriers will not be a serious problem as youngsters learn languages quickly. Many law graduates are already proficient in more than one Indian language as they spend five years and more studying law at a law school outside their home states. In short, the time for AIJS is now and it will bring a remarkable breakthrough in further integration of the legal and judicial system of the country, giving it quality and efficiency, much-needed presently.

AIJS has become essential for another reason as well. The existing system under which High Courts or State Public Service Commissions are recruiting judges to the district judiciary is so full of loopholes, delays and inefficiency that it is unable to produce enough qualified candidates to fill the vacancies. In some cases, even those limited selections are challenged in unending litigation, denying judiciary the services of meritorious candidates. It is sad that while other public services get relatively better candidates, the judicial services even at the district level are left to manage with less meritorious candidates or with none after prolonged selection procedures and substantial expenses. This is not because the judiciary is not an attractive service to the talented, but because of frustrating procedures and inefficient management practices. AIJS selection by a central agency under judicial supervision will make the difference that the system is waiting for.

Finally, does AIJS hit the federal structure of the polity as contended by some people? In this connection, it is necessary to recall the words of Dr BR Ambedkar. While introducing the Draft Constitution, he said: “….When diversity created by division of authority in a dual polity goes beyond a certain point, it is capable of producing chaos. The Draft Constitution has sought to forge means and methods whereby India will have Federation and at the same time will have uniformity in all basic matters which are essential to maintain the Unity of the country. The means adopted by the Draft Constitution for this purpose are (i) a single judiciary, (ii) uniform laws, civil and criminal, and (iii) a common All India Service to man important posts.”

Dr Ambedkar felt that federal polity would be strengthened in consistent with the unity of the country by having a single judiciary with uniform laws and an all-India judiciary. In fact, a unified judiciary helps to institutionalise the idea of co-operative federalism. Although the Constitution empowers Parliament to establish separate courts for enforcement of Union laws, it has, in the interest of unity and integrity of the nation and economy, continued the system of a single integrated judiciary for the Union and states.

Of course, there is a justifiable complaint that the government (State as well as central) is providing very little financial support to the judiciary. According to available data, except Delhi, all states are providing less than one percent of their budget for subordinate judiciary. In fact, more than half of the amount spent on the judiciary is raised by the judiciary itself through collection of court fees, stamp duty and miscellaneous charges (Agenda Notes of the Conference of Chief Ministers and Chief Justices of High Courts, 2006). The plan funds provided by the Union government to the judiciary varied from a mere Rs 700 crore in the Tenth-Plan to a couple of thousand crores in the Twelfth Plan. A centrally sponsored scheme for development of infrastructure for subordinate judiciary brought central/state funds on a 50:50 basis.

The Thirteenth Finance Commission recommended substantial increase in central funding of the judiciary, including subordinate courts. A report of the Justice Jagannath Rao Committee, appointed by the Supreme Court on the subject of judicial impact assessment, wanted the government to make the fund for additional judicial time required to implement Union laws to be fully included in the Financial Memorandum wherever a law/bill is introduced. This amount should be additionally provided to the judiciary independent of the regular budget.

Given the limited finances available with states, the funds required for an integrated all-India judiciary have to be necessarily provided by the central government. Such an approach will strengthen the federal scheme of governance while enabling the judiciary to manage its internal administration efficiently without having to depend on the government for getting even basic facilities.

—The author is a former Director of the National Judicial Academy and is presently Hony. Director of the Kerala Bar Council MKN Academy for Continuing Legal Education, Kochi