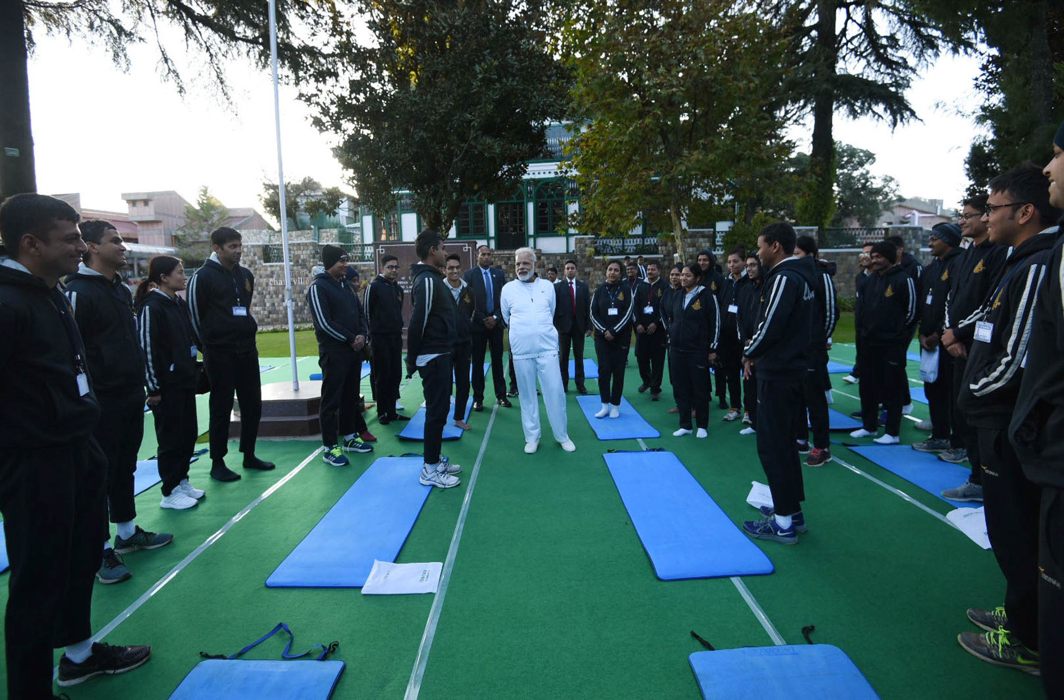 Above: Prime Minister Narendra Modi with officer trainees at a yoga session at LBSNAA, Mussoorie/Photo: UNI

Article 312 of the Constitution provides that Parliament may by law regulate the recruitment and the conditions of service of persons appointed to the All India Services (AIS) common to the Union and states. The Indian Adminis­trative Service (IAS) and the Indian Police Service (IPS) were covenanted in the Constitution by this very Article.

The All India Services Act, 1951, enacted thereupon, lays down: “Central Government may, after consultation with the Governments of the States concerned, make rules for the regulation of recruitment and the conditions of service of persons appointed to an all-India Service.”

The Act also says that Rules under it shall be laid before Parliament as soon as possible. They shall be subject to modifications, whether by way of repeal or amendment as Parliament may make on a motion during the session in which they are so laid. This means that all Rules to “regulate the recruitment, and the conditions of service of persons appointed to the AIS” are subject to the approval of Parliament.

Section 4(2)(a) of the IAS (Recruitment) Rules, 1954, requires that the method/methods of recruitment to be adopted for the purpose of filling up any particular vacancy/vacancies shall be determined by the central government in consultation with the Commission and the state government concerned. “Commission” here refers to the Union Public Service Commission (UPSC) constituted under Article 315 of the Constitution with the mandate (Article 320) to deal with matters relating to recruitment to civil services and posts.

For this purpose, the UPSC conducts examinations in three stages—Preliminary, Mains and Interview. After this year-long exercise, the UPSC prepares a merit list recommending candidates for appointment to the IAS, IPS and Central Services and sends it to the Government of India (GoI) which is binding. Based on these recommendations, the cadre-controlling authorities of the government (department of personnel & training (DoPT) for the IAS and ministry of home affairs for the IPS) issue appointment orders.

All those appointed to these and Central Services (called probationers) together do the first three months at the Lal Bahadur Shastri National Academy of Administration (LBSNAA), Mussoorie, as a Foundation Course (FC). After that, they go to the academies specific to their service for further training. IAS probationers stay back at the LBSNAA to continue their training. Their cadre is decided before the end of the first year. In the second year of probation, all officers go to their respective states for field training after a brief stint in Delhi as Assistant Secretaries to GoI. As of now, this is the arrangement.

All these can change if a proposal from the Prime Minister’s Office (PMO) which says that service as well as cadre would be allotted based on the probationer’s performance in the short FC becomes policy.

This would render the merit list recommended by the UPSC after the rigid examinations worthless. Ab initio, this is an absurdity. The short FC is basically aimed at instilling a feeling of esprit de corps among the probationers who have been appointed after a gruelling selection process and provide an opportunity to establish camaraderie among them which could prove beneficial in future. Introducing intense competition to improve the rank to get into a more coveted service will vitiate the atmosphere and lead to mental stress and tension. This is not conducive to good governance.

From the haste with which this proposal is being pushed through by the PMO and DoPT it looks as if there is something sinister in the move (see DoPT letter). The PMO wants this to be implemented this year itself and the DoPT wants a response within a week. The Parliament, UPSC, state governments and AIS aspirants be damned!

If this hasty proposal is implemented, it will theoretically be possible for a candidate whose rank in the UPSC civil services examination allows him to get into only, say, the Indian Ordnance Factories Service, to climb up to the coveted IAS on the basis of his “performance” in the FC. This method could ruin whatever objectivity the UPSC examination provides and put pressure on probationers to appeal to the subjective assessments of their examiners.

The fear is that pliant bureaucrats and academics with extraordinary powers will open the doors of sought-after-services to people whose ideological outlook suits the current government, creating a loyal or “committed” bureaucracy in the long haul. This fear is strengthened by the fact that several coaching centres with close connections to the RSS have sprung up all over India with participation by serving and retired bureaucrats. The new proposal could serve the interests of these centres.

What is being attempted is at loggerheads with the constitutional scheme of things. Responding to the grave crisis created by Partition and the post-British administrative vacuum, Sardar Vallabhbhai Patel wrote to Prime Minister Jawaharlal Nehru in April 1948 advocating the formation of an independent civil service in the functioning of which “political considerations, either in its recruitment or in its discipline and control, are reduced to the minimum, if not eliminated altogether”. This was strongly opposed by the chief ministers of states as well as many members of the Constituent Assembly. In his speech to this Assembly in October 1949, Patel had thundered: “The Indian Union will go. You will not have a united India if you do not have a good All India Services which has independence to speak out its advice … If you do not adopt this course, I will take the services with me and go.” Sardar Patel had his way and the AIS was established to be the bulwark of post-independence governance. This was the status till now.

Prime Minister Narendra Modi, claiming the mantle of the Sardar, will have the service, which withstood the test of time during the last seven decades, commandeered, if he is able to have his way. The Modi proposal is the antithesis of Sardar Patel’s idea of having an independent and apolitical AIS.

Under Modi’s watch, the PMO has become a tool for demolishing institutions and instruments of democratic governance. Aided and abetted by the Niti Aayog, it is destroying whatever public character was left with the AIS. Recently, based on the recommendations of the Aayog, the PMO directed the DoPT to prepare a broad outline of modalities for privatising the IAS by selecting corporate candidates for appointment in the ranks of deputy secretary, director and joint secretary.

Another gem from the PMO is the new arrangement of IAS probationers starting their “field training” as Assistant Secretaries in Delhi instead of Assistant Commissioners/Collectors in a district. This is significant because the USP of the IAS is the valuable grassroots experience the officers gain, their wide contacts with the public and political leadership right from their first posting in the block/tehsil and their variegated exposure in different assignments. This is a boon for bottom-up, people-centred policymaking, conceiving and designing development-cum-welfare programmes and their effective and expeditious implementation. Instead of carrying the grassroots agenda upwards, the IAS officers will now carry them the other way around.

Sustained assault on the legislative, executive, judicial and economic institutions by the PMO has considerably stymied governance. Commandeering the AIS, its key instrument, could be the proverbial “last straw on the camel’s back” that could sink governance.