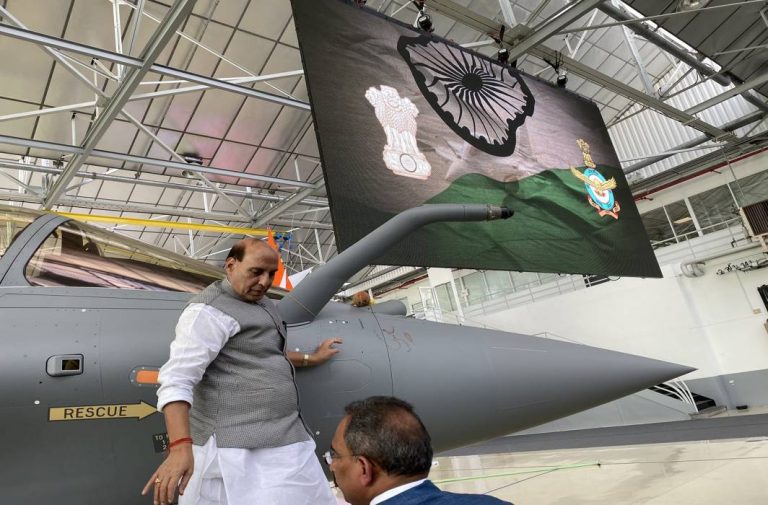 There’s a bizarre connection between the two French-made frontline fighters in the Indian Air Force inventory—the Mirage 2000 and now the first Rafale multi-role fighter handed over to Rajnath Singh in Bordeaux. Here’s the irony. Despite Rahul Gandhi’s fierce attacks on the Rafale deal, the fact remains that his grandmother did exactly the same thing with regard to the Mirage 2000. In 1984, Indira Gandhi as Prime Minister ordered 40 Mirage 2000 jets from France. Like the Rafale, the original offer from the French side was to transfer technology to HAL and set up a production line in India. It was a clear case of déjà vue. The Indian government hummed and hawed and finally rejected the offer basically under pressure from the then Soviet Union which successfully persuaded the Indira Gandhi administration to purchase MiG-29 jets. I was at the Dassault facility in Merignac to attend the handover ceremony of the Mirage, and wrote then in India Today. “Dassault’s worry extends beyond mere financial considerations. It is more rooted in the nature of the competition that has forced the Indian Government to review the second part of the Mirage contract; namely, the Soviet Union. Or, to be more specific, the MiG-29. The first sign that an attempt to scuttle the Mirage-2000 production programme was being made came when the Soviets offered India the MiG-29 the latest in their inventory (it is meant to enter Soviet operational service in 1985), during Defence Minister R. Venkatraman’s visit to Moscow last August. The offer was repeated during Soviet Defence Minister Marshal Dmitri Ustinov’s visit to New Delhi a few months later.’

In other words, the government of the day procured two separate jet types — the Mirage 2000 and MiG-29 — without choosing to license build either at HAL, settling instead for flyaway deals that only involved aircraft built in the makers’ factories in France and the USSR. The French offer to build Mirage 2000 jets in India remained valid from 1984-2006. After the 1999 Kargil War, the IAF pushed the Atal Bihari Vajpayee government for more Mirage 2000 fighters. A final opportunity to build the Mirage 2000 was finally dismissed, with a decision taken to conduct a contest for new fighters. In 2006,  Dassault Aviation finally pulled the plug on the Mirage offer, and replaced it with a pitch for the Rafale jet. Originally intended to involve 126 fighters and a licence production deal with HAL, the negotiations collapsed in 2016, resulting in a truncated deal for 36 jets in flyaway condition. The parallels are hard to miss. The Americans, under Trump, have been pushing India to purchase the F-18 Super Hornet made by Boeing while Russia is equally keen to sell India its new advanced Sukhoi 30.