Above: FM Nirmala Sitharaman justified the new CSR norms in the Companies (Amendment) Bill, 2019, in the Rajya Sabha

By Sanjiv Bhatia
A government that tries to do too much ends up doing nothing well
—Benjamin Franklin, one of the founding fathers of the US

India is the first country in the world to enshrine corporate giving into law. The Companies Act 2013, originally passed by the left-of-centre Congress government, mandated that companies above a certain size (annual turnover of Rs 1,000 crore or net worth of Rs 500 crore), and profitability above Rs 5 crore, must contribute two percent of their average three-year pre-tax profits to social development activities. Around 6,000 companies currently fall under these limits, and based on 2018 year-end corporate filings, roughly about Rs 29,000 crore is available for CSR donations. Till now, the law required that “if the company fails to spend such amount, the Board shall, in its annual report, specify the reasons for not spending the amount”. But a 2019 amendment to the Companies Act now adds a three-year imprisonment term for executives of any company which is in default of its CSR obligations.

With this amendment, India is now the only country that makes the voluntary act of charitable giving mandatory, and worse, not giving charity a criminal offence. It is often said that “the income tax has created more criminals than any other act of government”. Add CSR to that odious category as the government threatens to make criminals out of the people that create wealth and jobs in the country. History is clear on one thing: When governments use coercion to modify the behaviour of wealth and job creators, the results are never good.

Despite the apparent interdependence between business and society, CSR has been a controversial issue. Nobel-winning economist Milton Friedman was of the view that a company can provide the best service to society by producing the goods and services it needs, and providing good-paying jobs in the community, and that it could do these things only by making profits. Loss-making companies provide neither useful goods nor steady employment. So, according to Friedman, the only responsibility of a company is to its shareholders. The decision on which charity to support and how much money to donate is a personal one best left to individual shareholders. By forcing companies to comply with CSR, Friedman argued, you allow a Board of eight people to make that decision for millions of shareholders. It is always possible that the Board might decide to support a cause that individual shareholders vehemently oppose.

Others who have argued against CSR have used a slightly different approach. CSR is a tax on a company which is eventually borne by either the shareholders, employees or the customers of the company. Since a corporation is a non-living entity, it cannot be expected to bear the responsibilities normally associated with citizenship. It is, therefore, best to allow living stakeholders to voluntarily decide how best to meet social obligations to their communities.

Those favouring CSR argue that companies owe their success in large part to the environment created by a well-functioning society. A healthy, educated and peaceful society is more likely to buy products and services and to provide employable workers. No company can survive in a dysfunctional society. It is, therefore, morally incumbent upon a company to engage in behaviour that pays back to the community from which it benefits. Sustainable businesses must meet the needs of their social environment, and when those needs change, companies have to adapt their behaviour to survive. 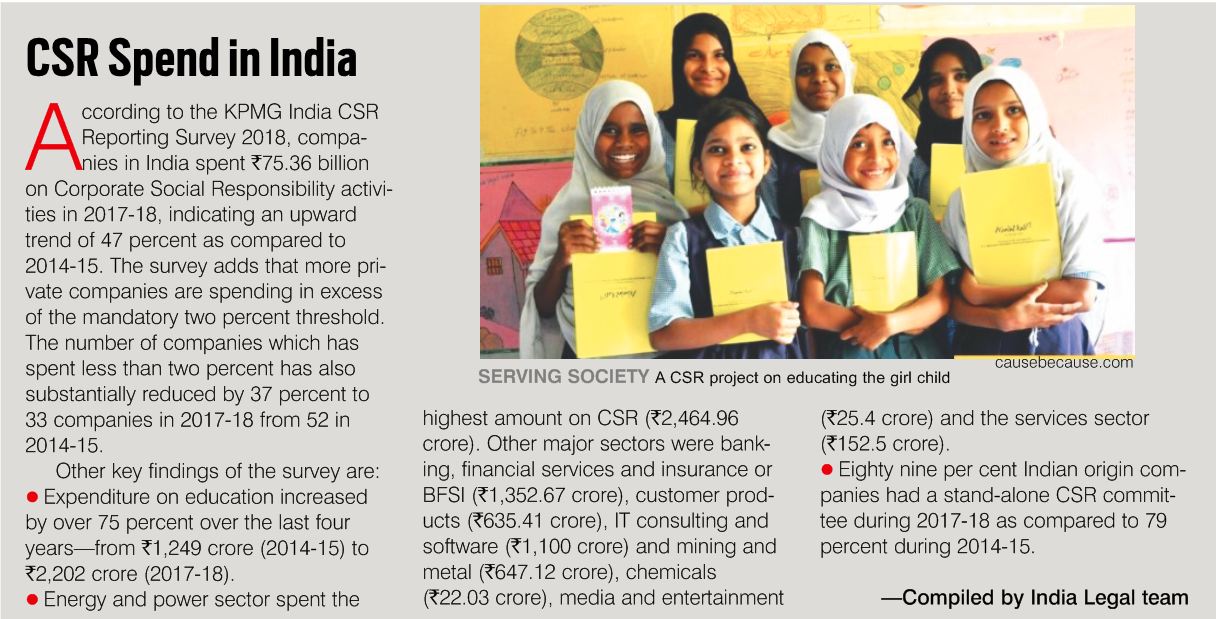 It is this push towards sustainability that now drives CSR behaviour. Over 80 percent of the companies in the US and 60 percent of EU-based companies now disclose their CSR responsibilities transparently in their annual statements. The stock market is an important place for capital in these countries and this forces corporations to provide a high degree of transparency and accountability in their disclosures. There is also a huge move towards investing in companies that show a high level of social responsibility. Companies that behave irresponsibly such as Volkswagen which cheated on emission standards, or British Petroleum which was responsible for the Deepwater Oil rig oil spill, have seen their market values drop precipitously after these environmental disasters. Nike faced the market’s wrath when there was a strong public reaction to abusive labour practices at its factories in Indonesia.

Despite the heightened awareness of a company’s social responsibilities, CSR still remains largely a voluntary act. Companies have voluntarily stepped forth mainly in response to reputational risks and the wrath of capital markets. Only in India is CSR a mandated amount to be directed towards government-dictated priorities, and it is only here that any transgression could land the senior management of a company in jail for three years.

Given the current state of the Indian economy, and the critical role of the private sector in producing growth and jobs, it is bizarre that a supposedly business-friendly government would resort to criminalising voluntary behaviour. The response from India Inc has been predictable. Many senior business leaders have termed the government’s decision to impose a prison sentence over CSR as retrograde. Ratan Tata, whose Tata group of companies donates over $100 million every year for CSR activities, has repeatedly criticised the corruption and cronyism that accompanies CSR. There is strong anecdotal evidence to support Tata’s claims. Many firms have developed ways to receive their CSR donations back after giving kickbacks to an NGO. Others siphon money off by giving it out to NGOs owned by family members or friends who then withdraw the money in the form of large salaries.

And what is indeed troubling industry participants is that the move to criminalise CSR has come despite a significant improvement in the level of payments by the private sector. The total amount spent by companies as a percent of required CSR has increased consistently over the last five years, up from 70 percent in 2014 to 91.5 percent in 2018. A study of NSE-listed companies shows that the number of companies with unspent CSR money declined from 62 percent in 2014 to 39 percent in 2018. It appears that the government didn’t even bother to look at the data or conduct an impact assessment of CSR spends before passing such a draconian law. This nonchalant irreverence towards the corporate sector has irked many business leaders.

The government would be well advised to take the private sector more seriously. Killing the goose that lays the golden egg has always had a sad ending. The government should replace the coercive mandate of CSR with positive incentives and cooperation with corporates to seeking synergistic approaches to socially beneficial activities. Instead of threats of fines and jail time, the government should reward businesses that voluntarily give to charities—white passports for quick entry and exit at airports, invitations to high-level government delegations, tax rebates, preferential clearances, etc., are examples of incentives that can be used to reward corporate giving.

The current CSR law is so poorly conceived that it obscures the enormous opportunities for companies to truly benefit society. If companies were allowed to analyse their prospects for social responsibility using the same framework used to build their business strategy, CSR could be a source of innovation, opportunity and competitive advantage. Instead, now it is a box to be ticked and a cost and constraint to doing business. Why isn’t a company that requires funds to develop an innovative product (a new drug for example) allowed to put CSR funds into its own R&D instead of putting toilets in a faraway village? A company that needs to invest in retraining its staff so it can compete globally may find such retraining more socially responsible than giving money to an NGO that runs skill development centres. An investment by a company in a start-up that is developing an innovative water treatment technology may be more socially responsible than one that gives to a charity that distributes water at a bus stand.

A proper legislation on CSR should allow companies to identify and prioritise those social issues that matter most and where it can best make an impact. Typically, the more closely linked a social issue is to a company’s business, the more it can leverage its resources and benefit society. But forcing companies to put their unused CSR fund in a government escrow amount, as the present law requires, will simply encourage a hodgepodge of uncoordinated charitable activities that improve neither social welfare nor a company’s long-term reputational advantage. “Charitable giving used to be a big reputation builder for us,” says a director of a large corporate house firm, “It was part of our business strategy and often exceeded the two percent mandatory amount. Now it’s just about legal compliance and a box to tick.”

Often senior government officials “encourage” companies to support charities and NGOs from which they derive a financial benefit. There are 31 lakh NGOs in India, which is more than twice the number of schools, and 250 times the number of hospitals. There is one NGO for every 430 people, but only one policeman for every 709 citizens. With such a proliferation of NGOs, many of whom are run by relatives of powerful and networked people in the government, it is no wonder that corporations are mandated to feed them money.

Instead of shifting the responsibility for social welfare to the private sector, there is an urgent need to reform the government at all levels. There needs to be a serious introspection on the size, reach and responsibilities of a government. Is it attempting to do too much and ending up doing nothing well? Millions suffer every monsoon from floods caused by drainage pipes that local municipalities don’t bother to keep clean. Thousands needlessly die every year in accidents caused by potholes on roads that are ignored for years. And after 70 years of independence, only two cities in the entire country have 24-hour running water.

What the country needs is not coercive corporate giving but a law on government social responsibility (GSR) which makes failure to deliver public goods by government officials a criminal act at par with CSR.