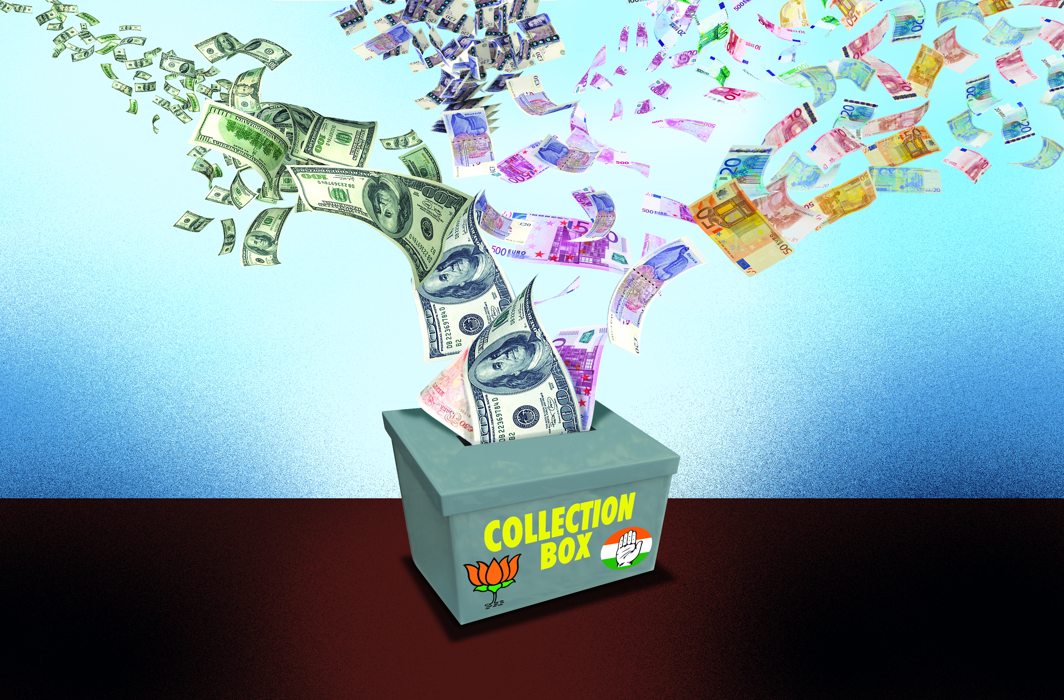 An amendment to the FCRA Act, 2010 will allow political parties to receive foreign funds without scrutiny. Is it another step towards the opacity of political finance in India?

While parliament has been in a deadlock for the last two weeks, it has managed to quietly pass a bill, an amendment to the Foreign Contribution (Regulation) Act (FCRA), 2010, that exempts political parties from scrutiny of foreign funds received by them. There was no debate on the bill and unsurprisingly, no political party seemed to be upset that it was passed in parliament.

The Foreign Contribution (Regulation) Act was first passed in 1976. The clause that prohibits political parties from accepting funds from abroad defines a foreign firm as that which has “more than one-half of the nominal value of its share capital held” by “corporations incorporated in a foreign country or territory”.

In 2016, the government had passed a bill to make it easier for political parties to accept foreign donations. Through the Finance Act, 2016, the government changed the definition of a foreign company by saying a firm with less than 50 percent of share capital held by a foreign entity would no longer be a foreign source anymore. The Act came into effect retrospectively from September 2010.

On  March 14, 2018, parliament passed another amendment to the FCRA, 2010, which made it even easier for political parties to accept foreign donations. The Lok Sabha website, listing amendments to the Finance Bill, 2018, stated: “In the Finance Act, 2016, in Section 236, in the opening paragraph, for the words, figures and letters ‘the 26th September, 2010’, the words, figures and letters ‘the 5th August, 1976’ shall be substituted.” This means that political parties are no longer accountable to justify their funds from foreign sources since 1976.

The latest amendment to the FCRA, 2010, benefits both the BJP and the Congress. In 2014, the Delhi High Court had found both the parties guilty of violating the FCRA by accepting donations from the UK-based company, Vedanta. Association for Democratic Reform has brought out that between 2004 and 2012, Vedanta Resources plc, then a London-based group, had allegedly donated Rs 879 lakh to the Congress and Rs 790 lakh to the BJP through its Indian subsidiaries. Both parties had moved the Supreme Court after the Delhi High Court verdict, where the case has been pending for two years.

Due to the 2016 amendment, which changed the definition of what constitutes a foreign company, Vedanta no longer falls in the foreign company category. This had led to both parties withdrawing their appeal against the Delhi High Court judgment in the Supreme Court in December 2016.

The 2016 amendment, however, did not provide the two parties the protection they were hoping for. The Delhi High Court at the outset had stated that since the writ petition against the two parties drew attention to donations up to 2009, the Court would not be concerned with the FCRA, 2010, which came into effect subsequently, on September 10, 2016, but with the FCRA, 1976.

The latest amendment to the FCRA, 2010, is especially relevant as, by ensuring that the change in definition of “foreign firm” is from 1976 and not 2010, it helps the two major national parties escape the fallout of the 2014 Delhi High Court judgment.

Hence, the ruling regime has been able to tweak the law in order to help itself and other political parties to escape public and judicial scrutiny. The FCRA amendment is hypocritical because the same government had come down heavily on NGOs receiving foreign funds. Revoking the licences of various NGOs, the government had alleged that funds from foreign sources are being used to finance protests against nuclear and mining projects in India and this adversely affects the growth of the country. It is surprising that the government is unwilling to apply the same logic to political parties. If it is true that foreign donations to NGOs adversely impacts economic growth of the country and results in foreign powers interfering with domestic issues, how will this foreign influence not occur with foreign funding of political parties?

This latest amendment to the FCRA is part of a long line of rather dubious bills which have made political funding more opaque in the country even though the finance minister has time and again reiterated the government’s commitment to bringing about a transparent system of political funding.

Through the Finance Bill, 2017, the government scrapped the ceiling that till then restricted corporate firms from donating more than 7.5 percent of their average three-year profit to political parties. This effectively meant that corporations can now legally exist with the sole purpose of funding political parties. Further, through the same Finance Bill, the government introduced electoral bonds to fund political parties and ensured that these bonds could be bought anonymously by corporations. While the finance minister claimed that anonymity was to protect the privacy of the donor, such a step seems to be a sureshot way of ensuring a political party-corporate firm nexus away from public scrutiny.

The latest Bill, making it legal for parties to accept foreign donations, adds to the opacity of the electoral funding process in the country. It allows for foreign influence in the democratic process. The amendment means that foreign firms will now join Indian ones in pressuring political parties for favours in exchange for donations.

The Bill, and the Opposition’s compliance in its passing, should worry all of us. A transparent electoral funding system is one of the most crucial ingredients of a successful democracy. The latest amendment seems to be one more step in the opposite direction.

As I have maintained on several occasions, a truly transparent system of political funding is possible only if we completely break away from the corporate-political nexus. The ideal solution would be to set up a National Electoral Fund to which all donors can openly contribute without expressing any preference for any political party. The funds could then be allocated to all registered parties in proportion to the votes obtained. This will ensure that no influence can be wielded by the donors.

In the long run, I believe, private donations have no role to play in political finance in the country if we are to move towards a truly transparent system of electoral funding. Once public funding of political parties is ensured, private donations must be totally banned. It is only then that the problem of corporate influence on political parties will be truly solved. And since public funds will be involved, there must be an annual audit by the CAG or an auditor approved by it. This will be the most decisive act of electoral reform that the country needs for transparency of political funding without which free and fair elections are not possible.