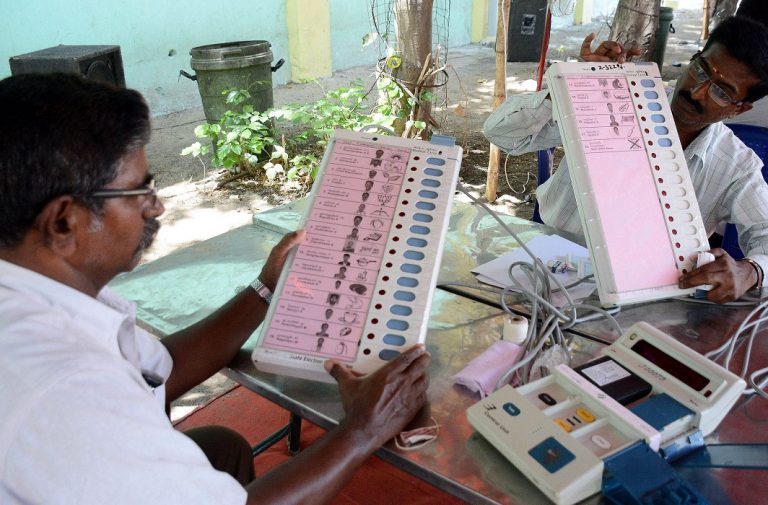 Above: Election officials pasting name and symbol on EVMs before dispatching to the polling booths ahead of Tamil Nadu Assembly Elections, in Chennai on Tuesday (file pic)/Photo: UNI

Article 324 (1) of the Constitution says: “The superintendence, direction and control of the preparation of the electoral rolls for, and the conduct of, all elections to Parliament and to the Legislature of every State and of elections to the offices of President and Vice-President held under this Constitution shall be vested in a Commission.”

This constitutional mandate which gives plenipotentiary powers to the Election Commission of India (ECI) is further fortified by several judgments delivered by Supreme Court. Take the far-reaching judgment in Mohinder Singh Gill vs. Chief Election Commissioner which says: “When Parliament or any State Legislature made valid law relating to, or in connection with elections, the Commission, shall act in conformity with, not in violation of, such provisions, but where such law is silent, Article 324 is a reservoir of power to act for the avowed purpose of not divorced from, pushing forward a free and fair election with expedition….”

In his well-researched book, “An Undocumented Wonder-Making of the Great Indian Election”, former Chief Election Commissioner SY Quraishi writes: “The Indian election is a gigantic exercise that is often called the ‘greatest show on earth’, not merely because of the scale, size and diversity of the exercise but because of the vibrant volatility of our democracy.”

Writing the foreword to this book, distinguished civilian Gopalkrishna Gandhi put it succinctly: “India is valued the world over for a great many things, but for three over others: The Taj Mahal, Mahatma Gandhi and India’s electoral democracy. The credit for the last of the three fames goes to the people of India … The people are the propulsive force, the driving energy of India’s Electoral democracy….But the vehicle’s engine, where ignition and combustion take place and the fuel and engine combine to move the vehicle is the Election Commission of India.”

Indeed, the ECI is world’s most massive election machinery. No doubt the country’s track record of timely and efficient elections has given considerable prestige to the ECI and legitimacy to India’s democratic polity and its politicians who are the beneficiaries. But, the moot question is what kind of people get elected? Nearly a third of elected representatives face serious criminal charges such as murder, rape, abduction and offences relating to moral turpitude.  Almost all of them have amassed unaccounted wealth. To this list are now added hate-mongers and myth-peddlers. In the event, our democracy stands considerably diminished.

Yet, amidst doubts and apprehensions with regard to so many institutions of governance, the ECI remains one institution that still enjoys the ordinary citizen’s goodwill and assent. It is imperative, therefore, that this goodwill not be allowed to be eroded at any cost if our democracy is to be guarded against a collapse of faith on behalf of “we the people”. But unfortunately, this collapse is gathering apace by the growing suspicion about the integrity of Electronic Voting Machines (EVMs) and the ineffective, indifferent and inadequate response of the ECI to this critical issue.

The reasons are not far to seek. Under the paper-ballot system in vogue earlier, voters could examine and check the accuracy of the ballot paper, their name and party symbol and verify whether it has been correctly marked. In case of an electoral dispute, physical reconstruction of the vote for authentication was possible. Vote counting was open and transparent. Under EVM voting, all that a voter does is press a button, see a light and hear a sound. He has no idea whether the vote has been registered and if so to which candidate. During counting also, there is no transparency because EVMs are just plugged in and counted on computers.

This brings us to “democracy principles” that every election should adhere to. These are:

b) The electoral process is subject to public scrutiny/examinability

d) There should be verifiability in the counting of votes and ascertainment of the results in a transparent manner.

While paper ballots, despite flaws, comply with all these principles, EVMs do not despite claims of being devices of technological excellence. In the event, the very integrity of India’s electoral process, even democracy itself, is at stake.

Despite this clear picture, the ECI has been insisting on dealing with this issue as a technology one and not one that concerns democracy. Whenever public suspicion is raised about EVMs, the ECI has been responding in a mechanical manner without applying its mind. Though the Commission has emphatically ruled out returning to the paper-ballot system as demanded by many political parties, it has done precious little to make EVMs credible by auditing and cross-verifying the electronic count with the manual counting of a substantial percentage of Voter Verified Paper Audit Trail (VVPAT) slips. Instead, it has restricted this to an abysmally low one of one booth per assembly constituency. This works out to 0.4 to 0.9 percent depending on the size of the constituency.

This is despite the Supreme Court’s judgment on November 8, 2013 in Subramanian Swamy vs. ECI mandating the use of VVPAT along with EVMs. It said: “From the materials placed by both the sides, we are satisfied that the ‘paper trail’ is an indispensable requirement of free and fair elections. The confidence of the voters in the EVMs can be achieved only with the introduction of the ‘paper trail’. EVMs with VVPAT system ensure the accuracy of the voting system…”

It looks as if ECI is looking for incontrovertible evidence of EVM-tampering before initiating steps towards its integrity. But there is enough suspicion already all over the country. As a German Federal court put it: “The democratic legitimacy of the election demands that the election events be controllable so that… unjustified suspicion can be refuted.” The phrase “unjustified suspicion” is important. The ECI has always maintained that suspicions against EVMs are unjustified. But the solution is not to dismiss these suspicions as baseless, futile and part of a political slugfest. Rather, the EC is obliged to provide the people of India a polling process capable of allaying unjustified suspicion.

This is a basic requirement for democratic legitimacy, not an optional discretion. This calls for substantial scrutiny and verification of VVPAT slips not only to detect, but to deter efforts towards stealing people’s mandate. For this to happen, the ECI should stand for democracy and not technology.