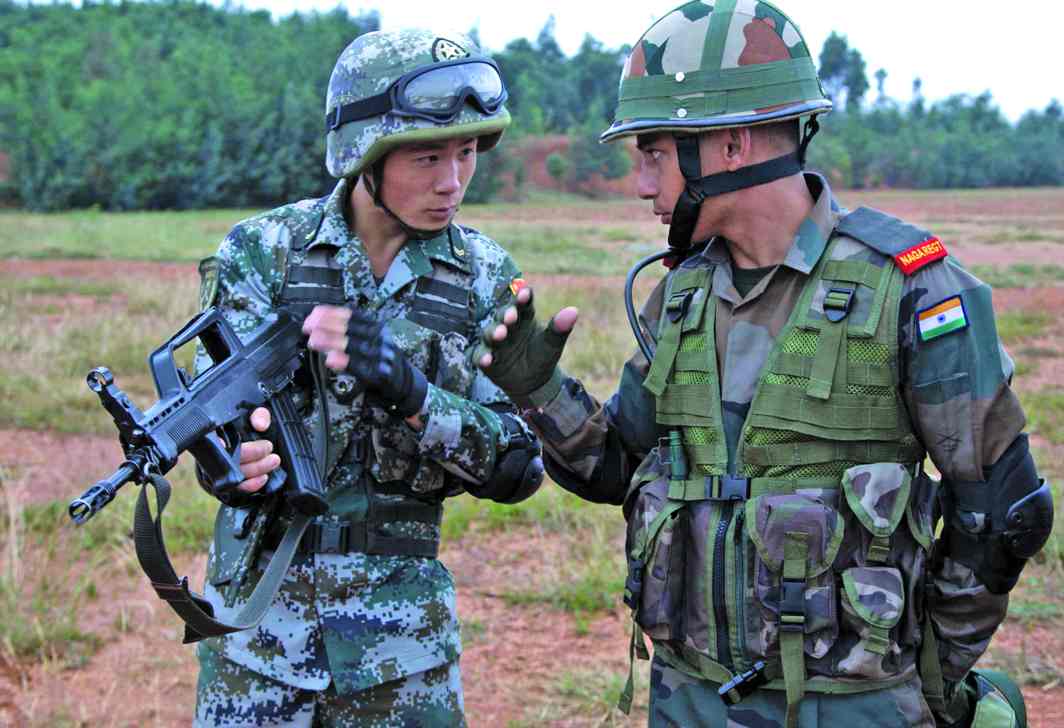 Above: A file photo from 2013 showing Indian and Chinese soldiers meeting during a joint military exercise. Photo: UNI

Seeing the military capability of our powerful neighbour, the government would do well to accept reality and avoid any military mishap as far as possible

It is said that strong fences make for good neighbours, but that is also true for countries having common borders which are not clearly defined. Any cartographic errors on the maps of the border areas can easily translate into military confrontation or serious diplomatic tension as we are seeing in the case of India and China. The latest confrontation between the Chinese and Indian forces at the point called Doka La on the Indo-Tibetan-Bhutan tri-junction is being described by Indian authorities as the gravest threat in military terms in recent times.

It is necessary to establish that the main border between India and China in the East runs along the established surveyed line called the McMahon Line which was drawn up in March 1914 during the Simla Conference. Over 90 percent of this runs along the watershed ridge of the Himalayas running East-West. South of the McMahon Line is considered India, while North of it is supposed to be China.

In the early 50s when the Indian side started patrolling near the western edge of the line near Bhutan (north of Tawang), the maps of the Indian army as per its interpretation of six river crossings, had to be modified bringing in certain features like Thag La ridge, Longju and Khinzimane as Indian territory. However, it should be noted that the treaty map is topographically vague, showing a straight line marked by a thick pencil instead of following the watershed ridge near Bhutan and Thag La. This treaty is devoid of any verbal description of geographical features or description of the highest ridges.

In Doka La, close to Chumbi Valley at the corner of the Indo-Tibet-Bhutan tri-junction, the Indian army had built two bunkers in 2012 at a place called Lalten. This was for the protection of Bhutanese territory. The Chinese forces destroyed these bunkers on the night of June 6, 2017, claiming the area as theirs and not India’s or Bhutan’s. There was quite a bit of physical jostling between the troops from both sides, with the Chinese bringing in more forces from its 141 Division located close by and India reinforcing its strength from the Sukna-based 33 Corps Headquarters.

Such incidents have taken place earlier, here and at other places along the border. China has raised the stakes with very belligerent statements reminding India of the 1962 military debacle, while India has responded, saying this was not 1962, and subtly reminding the Chinese of the Sumdrumchong incident where the Chinese had suffered a bloody nose. Both are waiting for the other to blink and retreat. It is essential to be bold and confident, but there also is a time for serious introspection and a review of one’s own military capabilities.

Looking at the present area of confrontation, where in 1962, India had suffered a very humiliating defeat, it is sobering to compare the logistics infrastructure of India and China as it exists right now. The Chinese went into border development in a very big way by building efficient high speed train tracks and roads to bring in soldiers and heavy armour right up to what is a future tactical battle area. Along with this, the Chinese have built a number of airfields for their fighter and transport aircraft along with helipads and advance landing grounds. Moving large military formations from one sector to another would be no problem for the Chinese.

When compared to China, India has practically no rail or road near the border, making it far from ready to handle the demands of a military confrontation.

However, in the case of India, there is practically nil rail or road system and with extremely unfriendly mountainous terrain, it is far from ready to handle the demands and requirements of a military confrontation. A full-fledged war on more than two fronts is a very serious situation, which should be studied in the light of what would develop on the tactical battle area. This involves weapon availability to the soldiers and war reserves which would have to be transported quickly. Till recently, many service chiefs have warned the nation that due to lack of indigenisation in weapon production in the country, we are buying practically every main weapon system from a humble rifle to main battle tanks and fighter and attack helicopters. The current fighting equipment comparison between India and China in the North-east only reinforces this point.

With this basic comparison in a few key areas, we have to accept reality and try to avoid any battle confrontation as far as possible. We realise that China has its own insecure situation in South China Sea, with a number of nations in opposition to its stand. India needs a period of six to seven years to develop and consolidate its position on the border, and work towards the indigenisation of weapon systems. The present government has now taken up this aspect on an urgent footing as is evident from PM Modi’s recent foreign visits.

The FDI process and joint collaboration with foreign defence industry is not only set to bring in more weaponry, but meet the demands of Make in India. Any military mishap on the border at this stage will be a huge setback in that process.