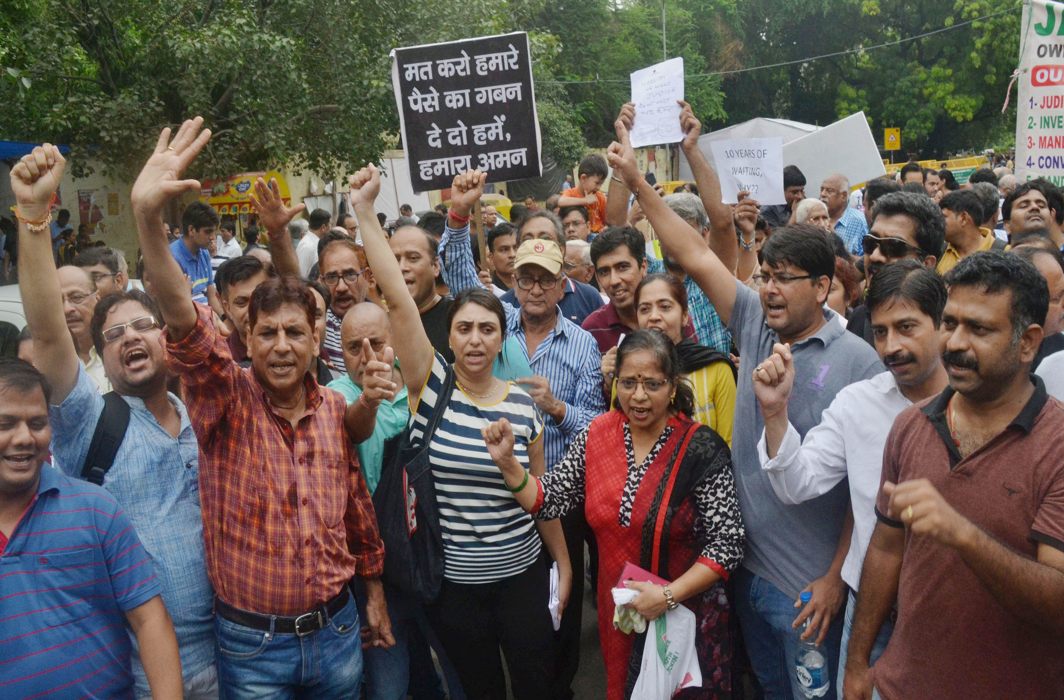 Above: Jaypee home buyers demand a judicial probe into the delay of their flat allotments/Photo: UNI

Though a 14-member panel has recommended amending the Insolvency & Bankruptcy Code to treat home buyers as financial creditors, it is yet to fructify. The Supreme Court has now stepped in to give them succour

I had predicted in my last column on Insolvency & Bankruptcy Code (Corporate Cauldron, December 24, 2017) that it would throw up so many issues that the corporate cauldron would not only keep bubbling but would froth and boil over from time to time. My prognosis has proved prescient with developments relating to insolvency dominating the business and financial landscape of the country during the last five months with no abatement in sight.

While new cases of insolvency have also come in (Reliance Communication is the latest!), the chaotic happenings in this area have largely been due to three factors—emergence of new and hitherto unimagined issues in the insolvency resolution process, the plethora of legal cases that different stakeholders have initiated against one another and conflicting interpretations of the IBC by warring parties. True, there has been some forward movement in handling a few major issues correctly, but total clarity is yet to emerge.

One of the major issues that has seen some traction is the treatment of home buyers of under-construction apartments when the insolvency/bankruptcy of a housing infrastructure company is being considered. At the moment, they fit within the definition of neither “financial” nor “operational” creditors. Analysts, including this author, had pointed this out as a major lacuna as it deprives them not only of the right to initiate insolvency proceedings, but also leaves them out of the hierarchy of claims. Worse, it deprives them of any presence or say in the resolution process or in the acceptance or rejection of a resolution bid. Their status under the IBC became the subject matter of discussion after the admission of the   insolvency case brought in by IDBI Bank against Jaypee Infratech, one of the 12 cases picked out by the RBI in           June 2017.

There were a couple of other cases too in this regard—Nikhil Mehta Vs. AMR Infrastructure and Anil Mahindroo & Anr Vs. Earth Organic Infrastructure—where the National Company Law Appellate Tribunal (NCLAT), New Delhi, classified home buyers of those companies as “financial creditors”. But these judgments were fact-specific and given because of the specific terms of contract between the home buyers and sellers. These cases further put the spotlight on the rights of home buyers and strengthened their case. In addition, there were a couple of writ petitions in the Supreme Court—Chitra Sharma Vs. Union of India and Bikram Chatterji Vs. Union of India— where the Supreme Court made observations about safeguarding the rights of home buyers under the Code.

The government had also realised that it needed to take into account a number of new issues, including the home buyers’ issue, to make the insolvency resolution process meaningful and effective. As reported earlier, the government had, on November 17, 2017, constituted a 14-member committee under the chairmanship of the secretary, department of corporate affairs, to assess the functioning of the IBC and examine issues that could impact the framework prescribed under the law. This committee, after examining many emerging issues, finalised and released its report on March 26, 2018.

It made nine main recommendations for amending the Code. On the home buyers’ issue, after considering the peculiarity of the Indian real estate sector and reviewing the financial terms of various agreements between the buyers and the builders, the committee concluded that the disbursement of money is in relation to the delivery of a future asset and the amounts so raised are used as a means of financing the project. The committee, therefore, concluded that the amounts so raised from a home buyer fall within entry (f) of Section 5(8) and may be classified as “financial debt”. The home buyers, therefore, are to be treated as financial creditors by inserting an explanation to Section 5(8)(f) of the Code. Accordingly, in the resolution process, they will be a part of the committee of creditors and their claims will be met according to the manner specified under Section 53. So far so good, except that the amendments recommended are yet to become a reality in law.

The committee also made a good observation that the resolution plans under the Code must be compliant with the provisions of the Real Estate (Regulation and Development) Act, 2016 (RERA). However, while it is true that RERA gives powers to the regulator to pass orders in favour of home buyers, it has no powers to enforce its orders. Also, RERA is silent on the eventuality of the developer itself declaring insolvency. Thus, RERA also needs to be amended to plug these loopholes and make it totally in sync with the Code to protect the interests of home buyers.

Meanwhile, the Supreme Court has been resorting to direct action in the cases brought before it by asking the promoters or parent companies of insolvent housing companies to deposit large amounts upfront so that home buyers could be refunded. In the case relating to Supertech, it has already ordered the refund of principal to home buyers and has been ordering upfront deposits of instalments on hearings. Similarly, on May 16, in the case of Jaypee Infratech, it ordered its parent company, Jai-prakash Associates, to deposit Rs 1,000 crore by June 15, 2018, for refunding the home buyers.

If you think that isn’t enough, there are petitions to the chief vigilance commissioner (CVC) and the CBI to intervene. It is, indeed, a wonderland that would invite an Alice-esque comment—“curiouser and curiouser”! No wonder, amongst the bigger cases, only that of Electrosteel Steels seems to have been finally resolved with no legal challenges.

The most curious case is that of Binani Cement where initially Dalmia Bharat’s bid was accepted and UltraTech Cement’s bid rejected. UltraTech, the unsuccessful bidder, then reached an out-of-court settlement with Binani Industries, the promoters of Binani Cement, promising to pay back the lenders in full and without any “haircut”. This invited howls of protest from Dalmia Bharat who castigated this settlement as illegal. Petitions were sent to the CVC and the CBI and the resolution professional alleged fraud on the part of Binani Cement. Dalmia Bharat’s main argument was that once the resolution process had started under the Code, there was no place for an out-of-court settlement. UltraTech, on the other hand, came out with the argument that the main purpose of the Code was to find the best resolution, with the least “haircut” to the creditors. What takes precedence—procedure or object?

UltraTech then approached the SC which refused to intervene. In between, UltraTech submitted its settlement as a revised bid whose eligibility was first challenged in the NCLT and then tested in the NCLAT. Last heard, the NCLAT had ruled that the resolution professional of Binani Cement (who in this case had been siding with Dalmia Bharat) could not decide on the eligibility of the bidders placing their revised bids and had directed the Committee of Creditors to select one of the bids placed before it. Simultaneously, Binani Industries has moved the NCLAT on May 16, offering to clear 100 percent claims of all creditors within two weeks if its subsidiary, Binani Cement, is brought out of the purview of the insolvency process. Whew! I am sure we have not heard the last word in this case.

Seen from another perspective, these developments have a positive side too. It means there is a thriving market for stressed assets in India and instead of no takers, we have keen bidders willing to fight to the end. However, the delay in resolution is worrying and a way must be found to curb protracted legal challenges. Repeated question marks have also been raised on the quality and probity of resolution professionals. Perhaps the committee formed by the government needs to be a continuing committee with the running mandate of quickly attending to newer issues and challenges like an on-tap legislative  back office.