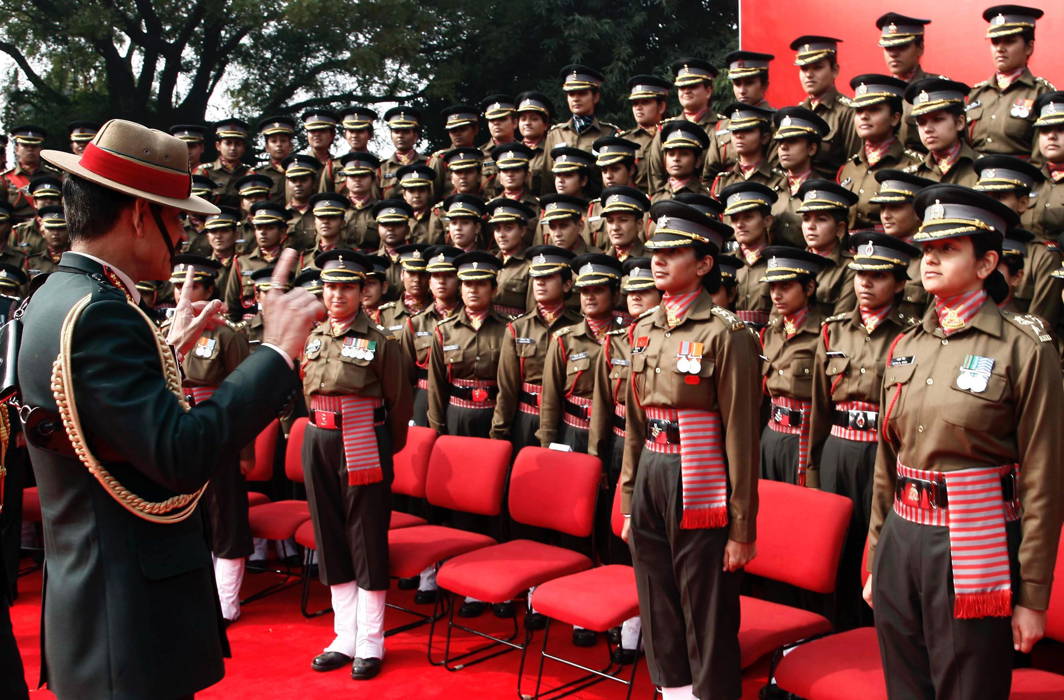 Above: A women’s contingent interacts with then Chief of Army Staff Gen Dalbir Singh/Photo: UNI

While a plea in the Delhi High Court asked why married persons were debarred from the law arm of the Army, many forget that its tough criteria and rigours are not suited to family life

In a recent case in the Delhi High Court, a petitioner questioned the centre’s policy of debarring married persons from joining the Judge Advocate General (JAG) office of the Army. The bench asked the Ministry of Defence and the Directorate General of Recruiting of the Army to clarify their stand on this issue.

The petition had asked why married persons can’t join JAG when marital status was not an eligibility criterion for the judiciary and the Indian Civil Services and said this was “institutionalised discrimination”. Far from it. One needs to understand the demands of an Army life in order to understand this well.

Those aspiring to be officers in all arms or services of the Army can do so only through two modes—short service commission (SSC) or permanent and regular commission (PRC). Requisite norms in this regard are laid down in Special Army Instructions issued by the Ministry of Defence. Identical orders govern aspirants wanting to join the Navy and the Air Force.

Induction is preceded by screening and selection of eligible candidates by way of Services Selection Boards. These candidates need to meet the laid-down criteria based on age, domicile/nationality, educational/professional qualifications and physical/medical standards. The selected candidates, male or female, must be unmarried and it is such soldiers who proceed to the regimental centre to undergo basic training.

Even the eligibility norms for getting into the United States Military Academy at West Point (which takes female candidates) are somewhat similar: “All are required to be a US citizen and between 17 and 23 years old, West Point cadets must be unmarried, not pregnant and not under any obligation to support any children.”

Selected candidates are called upon to undergo and qualify pre-commission training at academies located at Dehradun, Chennai and other places. The training is strenuous and intensive. It aims at imparting and grooming desired qualities vital for the harsh conditions of military service. Emphasis is laid on specific skills and on physical and mental robustness, courage, teamwork, integrity and leadership. The objective is to develop future commanders and to unlock their leadership potential.

The training curriculum is elaborate. All candidates must necessarily attain and qualify this time-bound training. All candidates (called cadets) live and train together. Their regimen and work schedule are elaborate and due compliance is expected. Except for specified term breaks, the training does not provide any leave or breaks.

The applicable criteria regarding eligibility, induction, selection, training, discipline and conditions of service of the officers as well as soldiers is carefully formulated to meet the interests of the service. At the same time, these are regularly and periodically scrutinised to assess the need for any change or improvement. Any policy promulgated on an experimental basis to gauge its impact may be later revised, amended or discontinued as part of overall service exigencies.

Non-acceptance of married candidates for induction in the military cannot be faulted from the prism of institutional discrimination either. Different institutions and types of professions have their own specific requirements and demands. The need for discipline and working necessities of the armed forces led to insertion of Article 33 in the Constitution of India. The said provision empowers Parliament to decide the extent to which the fundamental rights enshrined in the Constitution may be restricted or abrogated for members of the armed forces. This Article provides the constitutional basis for formulation of military-specific rules to meet the twin demands of “ensuring the proper discharge of their duties and the maintenance of discipline among them”.

The military training curriculum is meant to introduce and sensitise the trainees to the demanding schedule of a soldier’s life, which forms the basic foundation of army service. It expects constant uncompromising obedience of service duty on a 24×7, 365-day basis. Cadets at military academy are made to perform similarly and not to entertain any notion of 10 to 5 duty hours. This rigorous work schedule will not be conducive to the compulsions of married life.

Given the aforesaid non-derogable pattern of training and service requirements, it is only logical for the eligibility criteria to stipulate acceptance of unmarried candidates. The family demand on a married candidate, male or female, would obviously impact, restrict and attempt to deviate from the strict training needs that are linked to military induction, training and competence. Marital status carries with it major family obligations like births, deaths, marriages and divorces. It involves being a responsible caregiver for a child.

Not only at the induction and pre-commission stage, military ethos and regulations expect that young officers serving in the regiment or elsewhere do not get married till they reach the age of 25 and attain the rank of captain. Those who disregard such practice are not entitled to allotment of married accommodation.

The department of Judge Advocate General is a small segment of the India Army. Its officers are also required to exhibit the demands, needs, sensitivities and ethos and traditions laid down for the rank and file of the Indian Army. Military lawyers who form part of the JAG community are service officers who are governed by the Army Act, which is equally applicable to officers and men of various arms and corps constituting the military. They have to abide and adhere to the same military code of conduct. As such, its officers, whether male or female, undergo an identical training curriculum as part of pre-induction training.

Grant of commission after successful completion of military training to law graduates is followed by their attachment for two years to infantry units deployed on border locations. Usually, non-JAG officers posted to these units are also unmarried. JAG departmental officers operate and function just like their combat counterparts so as to get accustomed and acclimatised to the rigours of military demands. They are expected to appreciate the needs of military law which they would be called upon to practices in future. Their exposure to a military routine is vital for them to actually understand the command imperatives as well as their impact on subordinates who are bound to respond to military orders in letter and spirit.

Yet another practical reason to exclude married men or women from embarking on pre-commission training, a prelude to grant of commission, is to avoid adversarial impact on the spouse in case of an unfortunate injury or rejection from training. This would appear as a major calamity not only to the partner but to in-laws, too.

—The writer was Judge Advocate General of the Indian Army and Director, Amity Law School, Noida