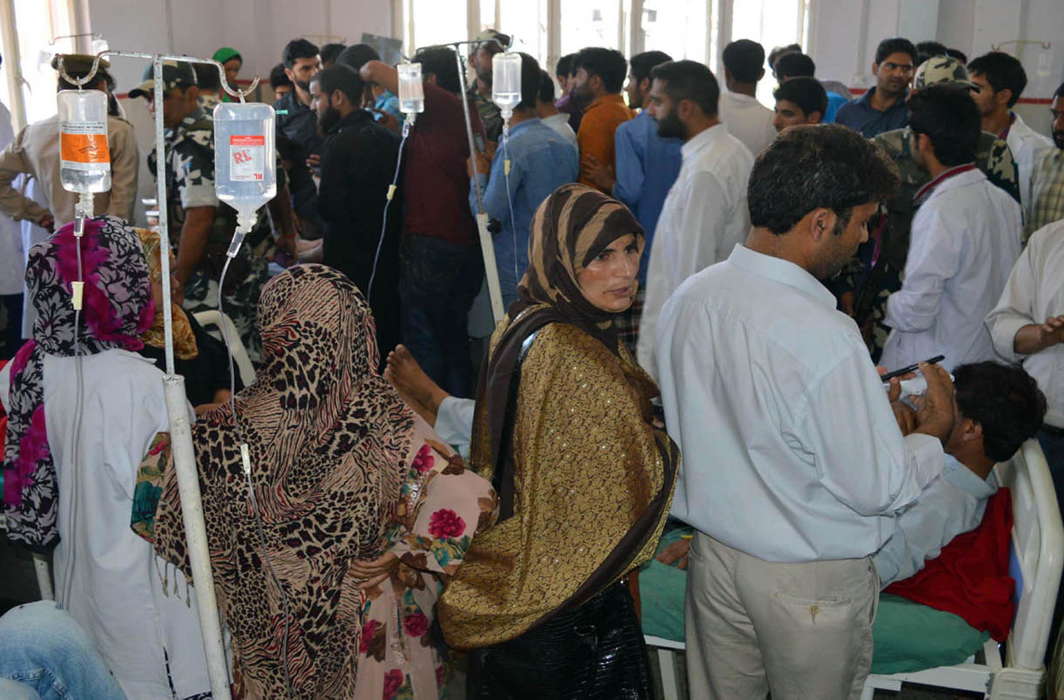 Above: A majority of the poor do not have health insurance and expenses are high

The Modicare project of the PM, which will kickstart on August 15, aims to provide free health insurance to poor families and will target 50 crore people. How realistic is this health scheme?

India is the seventh largest country in the world by area and the second-most populous after China. With an estimated population of over 1.3 billion, it is projected to be the most populous country by 2024, surpassing even China. Although proclaimed to be the fastest-growing economy, India, ironically, continues to be among the countries with the lowest public expenditure on healthcare. The government spends less than 1.3 percent of the GDP on health, while the total expenditure in this sector is 4.7 percent of its GDP. Compare this to the US which spends around 18 percent of its GDP on healthcare.

The private health sector, on the other hand, has shown impressive growth, though it is out of reach for most people.

A majority of the population still does not have any insurance cover, either public or private, and hence people spend out of their pockets for medical expenses. India ranks high on the list of countries with the highest out-of-pocket spending on health.

A survey conducted by the National Sample Survey Office (NSSO) found that people living in rural areas mainly depend on their “household income or savings” (68 percent) and “borrowings” (25 percent) to meet medical expenses, while people living in urban areas rely more on their “income/savings” (75 percent) than on “borrowings” (18 percent). The survey also revealed that 86 percent of the rural population and 82 percent of the urban population were not covered under the Rashtriya Swasthya Bima Yojana (RSBY) or similar government schemes.

Rising healthcare costs, coupled with rising income inequality, have made quality healthcare inaccessible and unaffordable for most Indians. The only way to bridge the gap between rising costs and affordability is through developing a viable mechanism in the insurance sector. Health insurance is essential not just for the physical health of a family, but also for their financial well-being. It enables access to appropriate healthcare while reducing the impact of an untoward health crisis on a family’s earnings.

The National Health Protection Scheme (NHPS) or Modicare was announced as a flagship programme in the Union budget this year under Ayushman Bharat. This ambitious project of Prime Minister Narendra Modi will kickstart from August 15 and roll out in 12 states in the first phase. It aims to provide free health insurance to poor families and targets 50 crore people (from about 10 crore families).

Some of its salient features are:

While questions have been raised if this is another “jumla” of the centre, the fact is that this is the world’s largest government-funded healthcare programme aiming to cover nearly 40 percent of India’s population. The ultimate goal is to provide equitable, accessible, available and affordable health for the poorest and most vulnerable populations.

Universal insurance has always been a demand of the medical profession and also of the Indian Medical Association during my tenure, first as secretary general and then as national president. It is not possible for a citizen to afford secondary and/or tertiary healthcare unless he is insured.

The NHPS will replace the RSBY, the existing healthcare scheme that was initially targeted at Below Poverty Line families. It was started by the previous government but failed for multiple reasons. It provided hospitalisation coverage up to Rs 30,000, the coverage extended to a maximum of five members of the family, including the head of household, spouse and up to three dependants. Modicare, on the other hand, increased insurance cover per family to Rs 5 lakh.

However, under the NHPS, there will be a capping of fees provided for procedures. This is an area of dispute between healthcare providers and NITI Aayog. I feel that once the scheme takes off, the controversy will settle and reimbursement charges will be redefined. The NHPS does not cover outpatients.

Once the scheme is implemented, there will no longer be a “poor” category as this section will be covered. It will be a boon to hospitals which are bound to do 10 percent charity in lieu of the subsidised land they get, as they will now be paid under the scheme. Also, if the government is going to pay for the insurance, then all government hospitals charging money for procedures will hopefully get reimbursements from the scheme.

The future will depend on implementation and innovation of low-cost modules. The scheme should mandate drugs from the national list of essential drugs, a one-drug-one-company-one-price policy, Cure-in-India and Make-in-India for equipment and devices, etc. Reimbursements must be based on standard treatment guidelines and defined length of hospital stays similar to Obamacare and Medicare in the US, which limit hospitalisation days to limit the cost of treatment. Incidentally, the government has capped the pricing for several treatment packages under this scheme.

The success of Modicare will depend on how many healthcare establishments enrol in the scheme. West Bengal, Kerala and Odisha have opted out of it, while Rajasthan and Maharashtra are reportedly reluctant to implement it. Could it be that the name Modicare will influence the 2019 elections, and their own schemes will take a backseat? Or is it a political decision to oppose any government policy? That is difficult to tell.

Another grey area is whether Modicare will be used by politicians to enroll non-eligible people as election nears, thereby leaving out deserving ones. This is the apprehension of small healthcare organisations which fear that their existing private patients may shift to Modicare via this route.

Healthcare and insurance cover have failed to reach the interiors of the country. The main challenge will be to see that it attracts the private sector to invest in rural areas. That will only happen if they find the investment worth the returns. Though there will be short-term difficulties initially, Modicare will be viable in the long run, provided the government reimburses the enrolled establishment in time.

We need to make sure that the NHPS is not vulnerable to repeal or amendments. This could alter the very essence of the scheme in case of a change in the government. Obamacare or the Patient Protection and Affordable Care Act in the US is facing such challenges.

Sooner or later, the healthcare economy of the country will depend on CGHS, Modicare and private insurance. And there will be very few who will pay cash for their health expenses. Let us hope that Modicare survives in the long run and is a turning point in public healthcare in the world.

—The writer is President, Heart Care Foundation of India and first Vice-President, Confederation of Medical Associations of Asia and Oceania