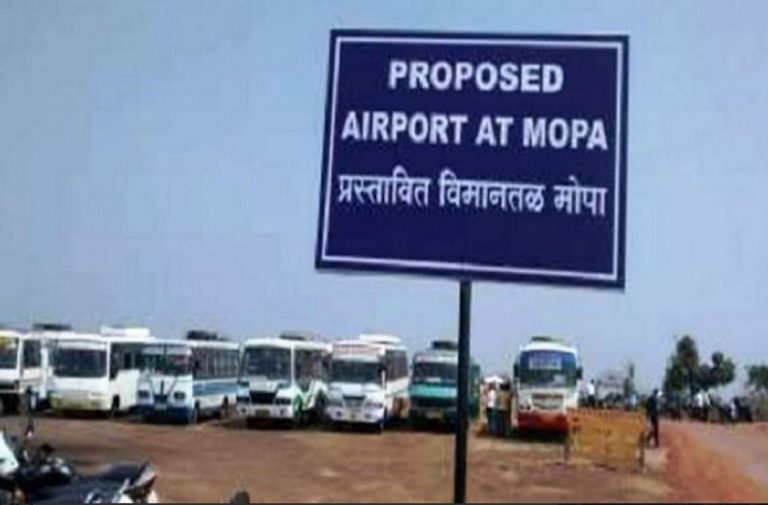 Twenty-three years after Goa initiated the process for an international airport, the apex court gave its nod after laying down rigorous guidelines. But will these be followed?

A greenfield airport at Mopa in North Goa, being developed by GMR, seems to have finally crossed all hurdles. A Supreme Court bench, comprising Justices DY Chandrachud and Hemant Gupta, has given its nod for the construction of the airport and asked the National Environmental Engineering Research Institute (NEERI) to oversee the project to ensure that there is no environmental damage.

The bench directed the concessionaire of the project to adopt a zero carbon programme in the construction and operational phases of the airport. It said conditions imposed by the centre’s Expert Appraisal Committee (EAC) and the NGT are sufficient to protect the environment and approved the project. Incidentally, the Court had last year found fault with the environment clearance (EC) given to the project and directed the EAC to re-examine it.

Mopa village is situated in Pernem taluka in North Goa, close to the inter-state boundary with Maharashtra. The proposed airport is approximately 35 km north-east of Panaji, the capital of Goa. The site is a lateritic tabletop plateau at a height of 180 m above sea level and is surrounded by steep slopes.

As the airport at Dabolim is saturated and is a military airfield, there are restrictions on civilian airlines. In 1997, Goa government initiated a process to commission studies and project reports for a proposed international airport. The project was granted an EC by the Ministry of Environment, Forests and Climate Change (MoEFCC) in accordance with the procedure mandated in the Environmental Impact Assessment (EIA) notification of September 14, 2006.

After the Terms of Reference were issued by the EAC, the draft EIA report was submitted to the Goa Pollution Control Board, and a public hearing was conducted at the project site on February 1, 2015. On May 20, 2015, the Goa government submitted the final EIA report to the MoEFCC, seeking the grant of an EC for the project.

The EAC, at its 149th meeting in June 2015, deliberated the EIA report and sought additional information. These were:

Representations were sent to the EAC by the Federation of Rainbow Warriors, a civic and social organisation. The EAC requested the project proponents to respond to the issues raised. Further clarifications were sought by it and eventually the project was granted an EC on October 28, 2015.

However, this was challenged in the NGT bench in Pune by Hanuman Laxman Aroskar and the Federation of Rainbow Warriors. Though the NGT initially stayed the felling of trees at the site, the stay was subsequently vacated. The NGT dismissed appeals upholding the validity of the EC and imposed several additional conditions. Subsequently, the order issued by the Forest Department to permit the felling of trees was challenged before the High Court of Judicature in Goa in March 2018. The High Court set aside the order of the Deputy Conservator of Forests and remanded the matter to be heard by the Principal Chief Conservator of Forests (PCCF). On April 2, 2018, the PCCF stipulated several conditions for the cutting and the felling of trees at the site including: (i) enumeration of trees (ii) plantation of 10 times the number of trees felled.

On January 13, 2018, the High Court issued final directions in the PIL, directing Goa to approach the NGT for permission to cut the trees. This was done on July 2, 2018. On August 21, 2018, the NGT disposed of both the appeals and upheld the EC whilst imposing additional conditions to safeguard the environment. The felling of trees was completed by January 2019. However, the NGT order was challenged in the Supreme Court.

On March 29, 2019, a bench comprising Justices Chandrachud and Gupta delivered what was hailed as a landmark judgment on the subject of EIAs. The procedure to be followed as per the EIA notification of September 14, 2006 was meticulously analysed by the bench. It also upheld the contention of the petitioners that there were serious discrepancies in the EIA report prepared by the project proponents. These deficiencies included severe underreporting on the number of trees at the site, the existence of reserve forests, perennial springs and water bodies around the project site and the ecological sensitivity of this area, which is part of the Western Ghats Eco Sensitive Zone notified by the MoEFCC.

The Supreme Court in its judgment on March 29, 2019 issued the following important directions:

“(i) The EAC shall revisit the recommendations made by it for the grant of an EC, including the conditions which it has formulated, having regard to the specific concerns which have been highlighted in this judgment;

“(ii) The EAC shall carry out the exercise under (i) above within a period of one month of the receipt of a certified copy of this order;

“(iii) Until the EAC carries out the fresh exercise as directed above, the EC granted by the MoEFCC on 28 October 2015 shall remain suspended;

“(iv) Upon reconsidering the matter in terms of the present directions, the EAC, if it allows the construction to proceed will impose such additional conditions which in its expert view will adequately protect the concerns about the terrestrial ecosystems noticed in this judgment. The EAC would be at liberty to lay down appropriate conditions concerning air, water, noise, land, biological and socio-economic environment;

“(v) The EAC shall have due regard to the assurance furnished by the concessionaire to this Court that it is willing to adopt and implement necessary safeguards bearing in mind international best practices governing Greenfield airports.”

In compliance with these directions, the EAC reappraised the project. A revised EC was granted on April 23, 2019, incorporating numerous conditions. The Supreme Court in its order on January 10, 2020, said:

“47. We have also taken note of the assurance which has been tendered on behalf of the concessionaire that it will adopt a Zero Carbon Programme both in the construction and operational phases of the airport. We accept the undertaking of the concessionaire and issue a direction for compliance.

“48. The earlier judgment of this Court highlighted numerous deficiencies by the project proponent leading to the grant of the EC. This Court highlighted numerous concerns, including the preservation of forests, the existence of ESAs with their attendant features and the impact of the proposed project on natural water channels. The Court also noted the abject failure of the project proponent to provide complete information on the existence of reserved forests. In the proceedings that followed the judgment of this Court, the project proponent sought to remedy its failure by taking into account additional information on significant aspects of the environment. In the process leading to the grant of the EC as well as the lifting of its suspension by this Court, numerous mitigatory conditions have been imposed on the project proponent. We deem it appropriate to ensure the oversight of the project by a specialised body to ensure compliance with the directions cumulatively issued by this Court. We direct the National Environmental Engineering Research Institute to be appointed to oversee compliance with the directions cumulatively issued by this Court. The project proponent shall bear the costs, expenses and fees of NEERI.”

Whilst this is a beautifully written judgment, what has been missed is that the airport will not only destroy a unique ecosystem, but the livelihoods of hundreds of farmers who are dependent on the water that flows down from the plateau to irrigate their cashew plantations.

Secondly, it is evident that despite thousands of cases wherein the EC conditions are never complied with, the bench has proceeded on the basis that a project proponent, who was caught red-handed concealing and providing incorrect information, will follow the letter and spirit of the law and will meticulously implement all these conditions.

It will be interesting to see how a “Zero Carbon Programme” will be implemented, and how NEERI will supervise and ensure the effective implementation of these conditions.

In the interregnum, the Maharashtra government has completed the construction of Sindhudurg Airport, 50 km from the Maharashtra-Goa border. It seems visitors to Goa will now have three airports, instead of one.