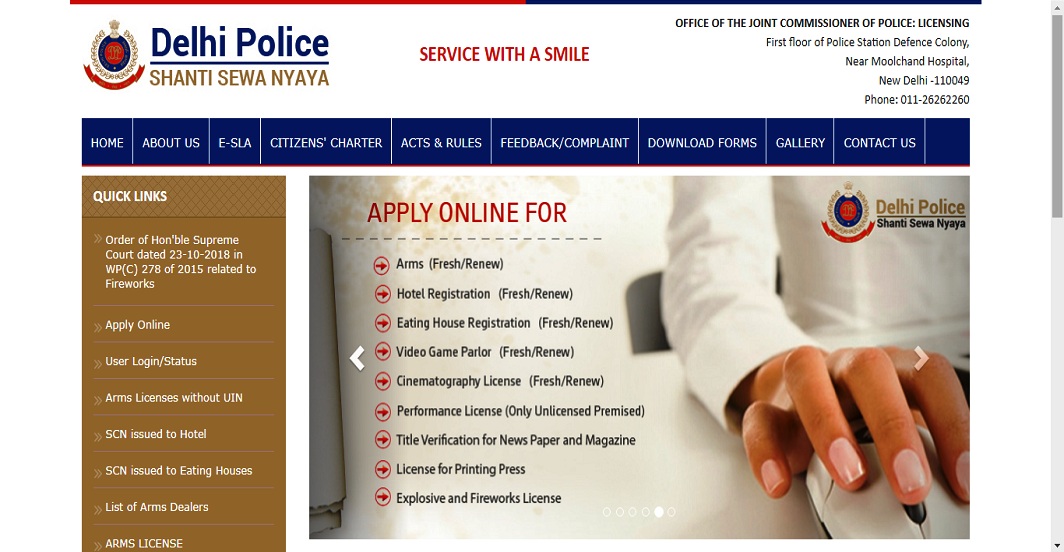 While this initiative of the Delhi police should be commended, stringent background checks should be conducted so that gangs and unscrupulous people don’t get hold of these lethal weapons

The Delhi police has, in keeping with the times, started providing various facilities to those wanting guns. From February 1, it has provided a fast and easy online service whereby a person can apply for a gun licence. All that the applicants need to do is submit certain documents as attachments. There is also a background check and an interview with the licensee before the final issuance. This seems to be a positive step although some have questioned the liberal granting of a licence for something as lethal as a gun.

The new facility has other provisions too that include renewing and transferring ownership of guns, having more than one weapon, converting one kind of weapon to another, extending the purchase period on the licence, permission to take the gun out of Delhi and surrendering the weapon and having someone else as a retainer of it. This is a fairly exhaustive facility and every precaution has been taken to ensure genuineness of the claim. All relevant evidence is sought to be placed on record for those needing a licensed weapon.

But the fact remains that in India where feudalistic traditions and ostentation are flaunted, would it be safe to allow an unchecked gun culture? These are issues which advanced countries such as the US, Canada, Britain, Israel, Australia, Norway, etc, are grappling with. There is a debate going on about whether to freely allow guns or to have necessary checks and balances. Unfortunately, almost all of them have made their laws stricter only after incidents of mindless shootings have taken place, killing innocent people in congregations, schools and restaurants.

According to the Arms Act, the designated authorities for issuing an arms licence are the district magistrate (DM) or the commissioner of police. The DM, invariably, would ask for a police report and a recommendation from the district superintendant of police, while in a police commissionerate, the facility for verification is an in-house activity. It’s an open secret that those with influence or money power get an arms licence easily. These can be in any of the three categories of arms—restricted, non-restricted and prohibited.

Experience has shown that licences should be given to those who have training and are adept at handling weapons. But unfortunately, these crucial requirements are often given the go-by. This results in novices acquiring licences and possessing guns, leading to their misuse and unfortunate incidents.

The Delhi police will do well to have its firing ranges and firing simulators thrown open to those seeking gun licences, thereby fixing a standard for professional competence. These tests need to be made tough and designed in such a way that no element of favour is allowed to creep in. For example, let a computerised simulator fix a minimum number of hits in the bull’s eye for a person to qualify as a trained handler of weapons. Only then should licences be given.

Though the newly introduced module of the Delhi Police has incorporated an interview component, it remains to be seen if the gun-seeker genuinely needs a weapon for his personal safety or otherwise. The threat perception needs to be assessed by an intelligence unit, which should take into account various aspects of a licence-seeker’s profile. Different people feel differently about their threat perception. A politician, an ideologue, a rich man, a controversial figure, minorities, the old and infirm, women—all could view themselves as vulnerable.

The moot question again is whether we are promoting gun culture. In Japan, incidents of gun-related homicide are one in a 10 million population. In Norway, ownership of a weapon is allowed, but its use is almost absent. Norwegian police, like the British police, does not carry arms. In the US, some states provide for free possession of guns, while others have restrictions. In Australia, gun laws are stricter. However, in India, we cannot afford to liberalise licensing of weapons to just about everyone.

In our feudalistic ways, we indulge more in flaunting weapons than possessing them out of necessity or for self- defence. In north India, people indulge in celebratory firing and use weapons to scare or impress onlookers. This unabashed use of firearms needs to be curbed. The Delhi police notification, therefore, could enable undeserving goons and the mafia to acquire weapons. A stringent background check of a person’s character and antecedents is essential before issuing an arms licence. It cannot be issued to a mentally unsound person or to an army deserter.

There have often been incidents of uniformed men shooting their seniors. Recently, a Haryana cop killed a magistrate’s wife and son in broad daylight in a Gurugram upscale market as people looked on. There is a school of thought which advocates disarming cops as well, like the UK’s Bobby. Trigger-happy cops and other undeserving and irresponsible weapon holders are a threat to society. In England, it’s the London Metropolitan Police only which carries arms. If firepower is needed, they have tactical squads which are put into action.

It’s a difficult decision to take as to who should be allowed to acquire guns. Even our police officials lack finesse in handling weapons as their annual firing practice is often given the go-by. Sadly, many times, bullying cops, lacking the firm emotional quotient required by an arms handler and being weak in their reflexes, create an embarrassing situation for the government when they open fire on mobs in the garb of crowd control. Though the government has, by a gazette notification in July 2016, dealt in detail with the Arms Rules, a restricted gun culture would be the best option.