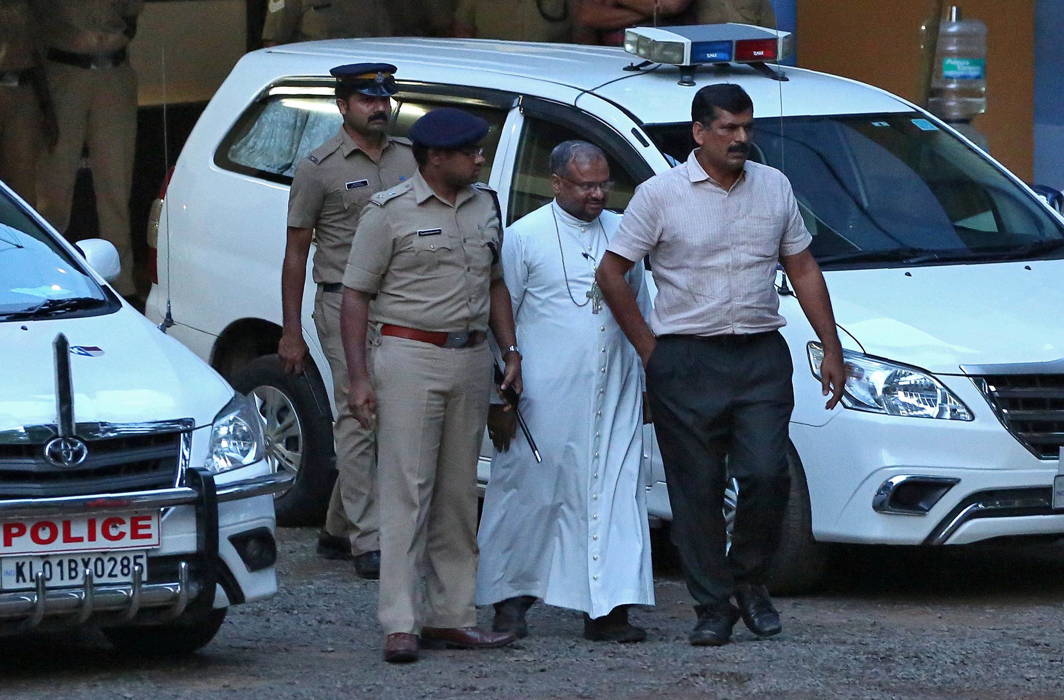 Above: Franco Mulakkal is taken into custody by the Kerala Police after nuns in the state agitated on the streets/Photo: UNI

The Catholic Church in India has never had it so bad. With the Jalandhar bishop, Franco Mulakkal, going behind the bars accused of a crime as serious as rape, it’s a crisis of unparalleled proportions that is staring the Church in the face. Never in Independent India had a bishop gone to jail for a sexual offence. What makes it worse is that Mulakkal’s arrest and his remand come days after a group of nuns, standing tall behind the rape victim who herself is a nun of a convent in Kuravilangad in central Kerala, took to the streets in protest. Not only was such a protest unheard of in the history of the Catholic Church, but never before had such voices of dissent also been allowed to reach out to society to be echoed and then supported by even the believers. Whatever turn the legal case takes in the days to come, activists say that this issue has set forth a much-awaited reform movement inside the Church.

The Kerala Catholic Bishops Council (KCBC), which is the state arm of the all-powerful Catholic Bishops Council of India (CBCI), has, meanwhile, released a press note last week delegitimising and denouncing the protest that the nuns carried out in Kochi, supported by a section of the priests and other acti­vists. It led to the police finally having no option but to arrest the bishop.

“We need to understand that the Church, like many other organisations, is a highly patriarchal one. There has been no space for women’s voices. That is why even after the arrest of the priest they are supporting him and are even putting out official statements in his support. They are unable to even accept that the law has caught up with a powerful male member of their institution because women have spoken up,’’ P Geetha, a well-known social activist, told India Legal.

Even as the bishop remains in judicial remand till October 6 in a sub-jail in Pala, the Church is leaving no stone unturned in drumming up support for him. Right from the note released by the KCBC that openly expresses apprehension whether “the bishop will get a chance to prove his innocence” to the Pala auxiliary bishop taking time out to visit Mulakkal in the sub-jail, all signals are pointing to the Church standing solidly with the rape accused with little regard for the victim’s plight. “If you look at all the cases that have struck the Church and its convents over the years, you will see a consistent trend of denial and then if someone raises their voice, they are quickly discredited. Always, the Church has stood with the accused especially if he is a male member of the order and so such a stand in this case, too, is hardly a surprise for many of us,’’ Father Augustine Vattoly, a priest-turned-activist from Kochi, said.

Father Vattoly and many others had joined forces with the nuns in forming the Save Our Sisters (SOS) Action Council that agitated until the bishop was arrested. SOS also brought out a reply note to KCBC which read, “It is not the nuns who took to the streets for justice who brought disrepute to the Church but the people who continue to shield the accused and not stand by the victim who are actually bringing shame to it and its legacy.’’

The accusation against the bishop dates back to 2014 when it was alleged by a nun belonging to the congregation called the Missionaries of Jesus that she had been raped by Bishop Mulakkal on multiple occasions between May 6, 2014, and September 23, 2016, in room number 20, which is the guestroom of a convent situated in Kuravilangad in Kottayam district in central Kerala. The nun alleged that the bishop, during his administrative visits to the convent from Jalandhar where he had been stationed, used to summon her to the guestroom on the pretext of discussing matters and sexually exploit her.  She also claimed that she had complained to the higher authorities but everyone had turned a blind eye to her plight, leaving her with no option but to file a police case.

On June 26, an FIR was registered at the Kuravilangad police station following which the case was taken up by the Ernakulam range inspector-general. A Special Investigation Team (SIT) was formed under him to probe the case. The SIT from Kerala travelled to Jalandhar where the bishop was questioned for nine hours. He was then summoned to Kochi under Section 41A of the Criminal Procedure Code and interrogated with the help of a questionnaire for eight hours each on three continuous days. The SIT registered his arrest on September 21.

The remand report filed by the SIT clearly says that there is prime facie evidence against the bishop since there is a lot of discrepancy in the statements he has given. On sustained interrogation, he had even revealed that consensual sex had taken place between himself and the nun. He had initially denied having had sexual intercourse with her. The bishop also claimed that on the specific dates that the nun alleged that he had raped her, he had either not visited the convent or not stayed back beyond 11 pm. But both these claims had been found to be untrue as per the register records at the convent, and the bishop had also been unable to provide any evidence of having stayed elsewhere on those nights.

Perhaps what is challenging for the SIT is to gather scientific evidence in the case since it’s a very old one.

“Prime facie there is enough evidence to arrest and make the bishop stand trial but the biggest challenge is to get the scientific evidence since the incidents happened four years ago. Anyway, we are trying our best to gather it,” a police officer told India Legal on condition of anonymity. Meanwhile, the bishop was taken for a potency test which he cleared and a DNA test has also been done on him.

The petition went on to say that the bishop had removed the particular nun from the post of the Mother Superior and Kerala in-charge in May 2017 following complaints of her having an affair with her cousin’s husband. It alleges that it is this action of the bishop that created the motive of vengeance in the mind of the complainant following which she had raised the allegations of rape. The KCBC, too, has taken a similar line which is clearly evident from the note that it had released. “We are not finding fault with the nun for filing a police complaint. But why did she not report the matter to the higher-ups in the Church? If she had done so, do you think the Catholic Church would have overlooked this?” asked Varghese Vallikatt, spokesperson, KCBC. But the nun and her supporters have rubbished this stand of the KCBC, saying that written complaints were given to concerned authorities and nothing had been done.

While playing the victim card by saying that the nuns’ protests were part of a plan to malign it, the Church has also unleashed a campaign of vengeance against those who supported the nun. Sister Lucy Kalappura who belongs to a church in the Thamarassery diocese in north Kerala, is the latest victim of this vendetta. Her crime—she had been vocal about the cause of the victim on local television channels. The result was that when she returned to her parish after visiting the protest site in Kochi, the Mother Superior ordered her to refrain from performing any of the duties that she had been doing at the parish all this while.

But the sanctions imposed on her had to be removed after a section of the laity stormed the Church last week demanding she be allowed to fulfil her duties. The priest was mobbed by the people and he finally relented by calling off the sanctions on Sister Lucy. “When I went to the protest I did not have any particular agenda against anyone. I just wanted to support the nuns. But now I realise that I have ruffled a few powerful feathers. I know there will be more sanctions against me and I may be harassed. But that does not deter me from doing what is right,” Sister Lucy said.

But matters did not end there. Sister Lucy has been continuously harassed and threatened over the social media by a few unknown faces since. Even a local daily that is run by a section of the Church openly ridiculed her. Also, a couple of other priests who had supported the nun have been openly reprimanded by the Church.

Meanwhile, the Kerala High Court has deferred the bail hearing of Bishop Mulakkal to October 3.

Sikhs and the SGPC: Bapti...