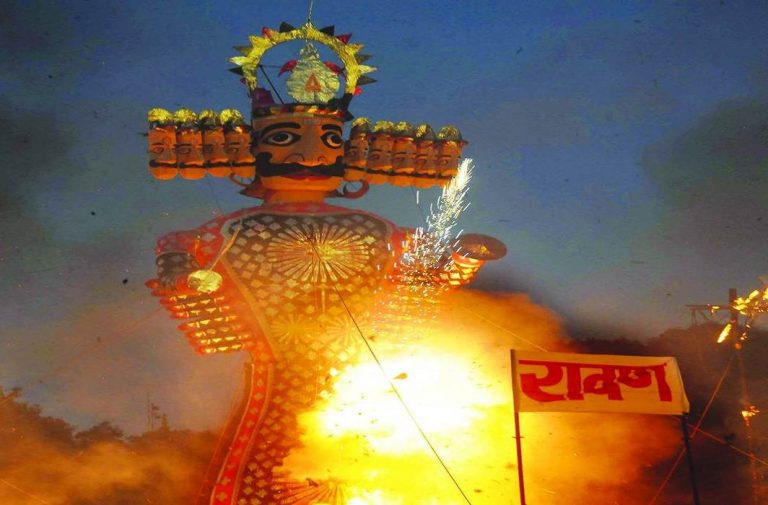 Above: The tradition of burning Ravan’s effigy has been in practice in many parts of northern India for centuries. Photo: UNI

The apex court recently dismissed a PIL which wanted a ban on the burning of Ravan effigies, saying that certain traditions are protected under the constitution

Custom is also called tradition. It is recognised as an unwritten law if it has been practised from time immemorial by any section of society. It could be a religious or a social practice, unless such a custom becomes repugnant to law. We had the abominable custom of Sati in Hindu society. Thanks to the efforts of Raja Ram Mohan Roy, his campaign against the practice of Sati nudged the British to enact a law for abolishing it.

There have been religious traditions in certain sections of society which demean a woman and children and discriminate against them in matters of succession to property, marriage, education and maintenance. The said wrinkles in the system are being slowly wiped out. Even if any objectionable practice is brought to the notice of the court, it unhesitatingly holds such customs to be bad in law.

Article 25 of the constitution ensures freedom of conscience and right freely to profess, practise and propagate religion, subject to maintenance of public order, morality and health. The right to practise one’s religion includes the right to follow certain customs and traditions associated with it and these become an integral part of the constitutional right.

Recently, a bizarre PIL was filed before the Supreme Court for direction to the state and central government for banning the burning of effigies of Ravan during Dussehra. The PIL said that such a practice results in huge wastage of money which could otherwise be used for public welfare and it was also an environmental hazard. Besides, on religious grounds, it was contented that the said custom finds no place in Valmiki’s Ramayana and Tulsidas’ Ramcharitmanas. That apart, it said that it slights the image of Ravan who was a great scholar and hurts the sentiments of some sections of people.

The origin of the Aryans in India is still a debatable topic. Some British and Left-leaning historians hold the view that the Aryans were not natives of India, but were immigrants from Central Asia. However, Lokmanya Tilak and other historians, on the basis of DNA and archaeological evidence, were of the view that Aryans were natives of India and not immigrants. These immigration theories created a divide between them and the Dravidians.

The Justice Party under the stewardship of Periyar EV Ramasamy aggressively asserted Dravidian identity as opposed to Aryan culture, which is said to be a Brahminical imposition. The Justice Party later on became a Dravidar Kazhagam party and as a social and electoral policy denounced the worship of Ram and eulogised Ravan.

It is indisputable that a substantial majority of the Hindu population holds Ram in the highest veneration and considers him to be the avatar of Lord Vishnu. The veneration of Ravan is only by a marginal and miniscule section of Hindu society who are either atheists or persons with Left-leaning political considerations.

The custom of burning the effigy of Ravan symbolises the victory of morality over immorality. Ravan had abducted Sita from her husband stealthily and kept her in captivity, compelling her to marry him. Even under the Indian Penal Code, Ravan is an offender, liable for punishment under Section 366 of the IPC, irrespective of the fact that he may be a great devotee of Lord Shiva and a great scholar. Valmiki’s Ramayana and Tulsidas’ Ramcharitmanas are only poetic narratives. It is inappropriate to demand that celebration of Ravan’s slaying by Ram should find a place in those narratives.

The right to practice one’s religion includes the right to follow certain customs associated with it and these become an integral part of the constitutional right.

Since time immemorial, the custom of the burning Ravan’s effigy has been in practice in many parts of northern India and has blended with Dusshera customs and thus assumes the character of a constitutional right of practicing religion. The counter-view of a miniscule section of the Hindu community who are atheists for political considerations is that their sentiments are offended, but this is not a customary right to be recognised.

The contention in the PIL that it results in wastage of money and leads to environmental damage is unfounded and lacks scientific material. Observing that under Article 25 of the constitution, any person can choose his or her own religion, the Supreme Court said it could not pass any direction to stop the burning of Ravan effigies during Dussehra festival.