With sedition charges on 49 intellectuals for writing an open letter to the PM, maybe it is time for the judiciary to erase the ideas of sedition so that dissent can flower

India as a society creates its own sense of legal spoof, a continuation of the surreal and the sinister, a mix of Alice in Wonderland and Kafka. The ridiculous and the sublime combine to add to the meaninglessness of memory and events. Probably the most banal and surreal event marking the 150th anniversary of Gandhi was the sedition charge against 49 intellectuals. The rest of the events can be reeled off as anecdotes. But this has the special quality of a fable.

These intellectuals, including Aparna Sen, Adoor Gopalakrishnan and Ramachandra Guha, wrote an open letter to the prime minister in July expressing concern over mob killings. It was a simple letter, more of concern and care, than an act of protest. It was like highlighting an event for discussion and in fact, marks one of the rituals of democracy. It assumes a society of free speech and a state with some modicum of civic responsibility. One has to state that the act was only a letter and not a satyagrahic act of fasting, a mere letter by 49 intellectuals, sounding more like an objection to table manners than a critique of political ethics. It dropped like a stone in a silent pond. A chief judicial magistrate, Surya Kant Tiwari, in Muzaffarpur, Bihar, chose to admit charges against it on a petition filed by a lawyer. The police, though, recommended closure of the case against them.

Sedition and debates on it in India have a curious resonance. The Imperial regime attempted to convict most of our national leaders on grounds of sedition. This galaxy includes Bal Gangadhar Tilak to Mahatma Gandhi for his writings in Young India. At one level, the magistrate has paid a compliment to this list of intellectuals by elevating them to that level.

For the Indian national movement, the label sedition evoked the arbitrariness of the British regime which condemned and prosecuted any act evoking “dissatisfaction” or “disloyalty to the government”. The mere memory of this era and the fact that this year was the 150th anniversary of Gandhi should have made the magistrate pause. Memory, after all, evokes ethics, tradition and precedent and law has never been indifferent to it.

The letter was an act of concerned citizens objecting to mob lynching, one of the obscenest acts of violence one can think of. In one quick moment, the magistrate raised a whole series of questions about dissent, violence, memory and the very ethos of democracy as we confront it today.

When one thinks of mob lynching, one has to confront the silence and the complicity of the regime. It often reads violence as an act that restores normalcy, rectifies justice. Each act of murder is seen as a rectification of some imagined injustice. The mob appears to live in an imaginary world rectifying an imaginary damage done. Mob lynchings in India seem or appear to be a continuance of governance by other means. One is reminded of a Gandhian anecdote years ago. Gandhi was once asked by a journalist: “What do you think of Western Civilisation?” He responded: “It would be a good idea.” Malayali novelist and cartoonist OV Vijayan, known for his laconic style, imagined a Gandhi, bent on his walking stick, returning to India. He is asked: “What do you think of Indian civilisation?” He responds: “That would be a good idea.” Reading about the mob lynching and the indifference of the regime, one feels the same way. The letter was a reminder that India still hoped to remain the land of Gandhi.

In fact, if India, independent India, had to make one salute to the Gandhian legacy, it would have been to exorcise this façade of sedition surrounding governance. It is hollow telling our children how Tilak and Gandhi were accused of sedition, immortalising these events in history books and then reinventing that history. There is a legal and political exorcism due that India has treated with benign neglect. It is as if the state wishes to mix dissent, indifference, threats to law and order, threats to security, acts of public nuisance and insult to religious feeling, all in the same legal soup. One is not denying the courts have tried to clarify concepts, but the spirit of ambivalence that haunts law when it comes to questions of public order makes it touchier and more hypothetical than ever. By default, any clerk or cop in a police station can enact out his Hobbesian fantasies indifferent to Romesh Thappar vs State of Madras or Kedar Nath Singh vs State of Bihar.

A perusal of court rulings on sedition is educative. In Kedar Nath, the court upheld the constitutional validity of sedition, but limited its scope to acts of intentionally seeking to create disorder. It differentiated the requirement of order from the imperatives of free speech, reminding one that sedition is more often a pretext to subvert free speech, becoming a prelude to authoritarianism. But there is more than the question of a text and its interpretation. The folk psychology of the bureaucrat is to impose it at any pretext. Worse, it creates a climate of self-censorship which amputates the possibility of democracy. Maybe it is time the judiciary erases the ideas of sedition instead. Only then can dissent flower and differences sustain ideas and lifestyles. One needs a court less repressed by the rituals of the state and with a less corseted mind to achieve this happy state.

There must be some sense of language, context, ritual and the norms of interpretation if law is searching for a civic of decency. It is precisely this that our intellectuals are looking for. At a tacit level, there are three key words that are being emphasised. One is citizenship, the other is creativity and the third is security. The letter is about citizens, not just the fancy label of intellectuals. It is as citizens that the writers are concerned. As citizens, they are arguing that neither citizenship nor writing can be passive because the creativity of citizenship has to emphasise the fragility of citizenship for many. Secondly, they are pointing out that creativity needs difference, that a mechanical notion of censorship demeans creativity. Finally, they are suggesting that sedition should join the “don’t use dictionary of authoritarian terms”. The frequency with which sedition charges and labelling of people as urban naxals is imposed makes one feel India is littered with subversives and revolutionaries. The paranoid nature of a securitarian state is obvious.

Finally, the writers who represent the best of the intelligentsia are celebrating democracy. One of them, Amit Chaudhari, later said that he assumes India is still a democracy that allows differences. Aparna Sen must be sensing a déjà vu of controversies. Ramachandra Guha might be tempted to send the authorities a copy of his books on Gandhi.

All they are implying is democracy is playful and life-giving and that the lethal nature of mob lynching is frightening. 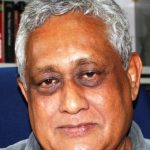 —Shiv Visvanathan is a member of the Compost Heap, a commons of ideas exploring alternative imaginations­