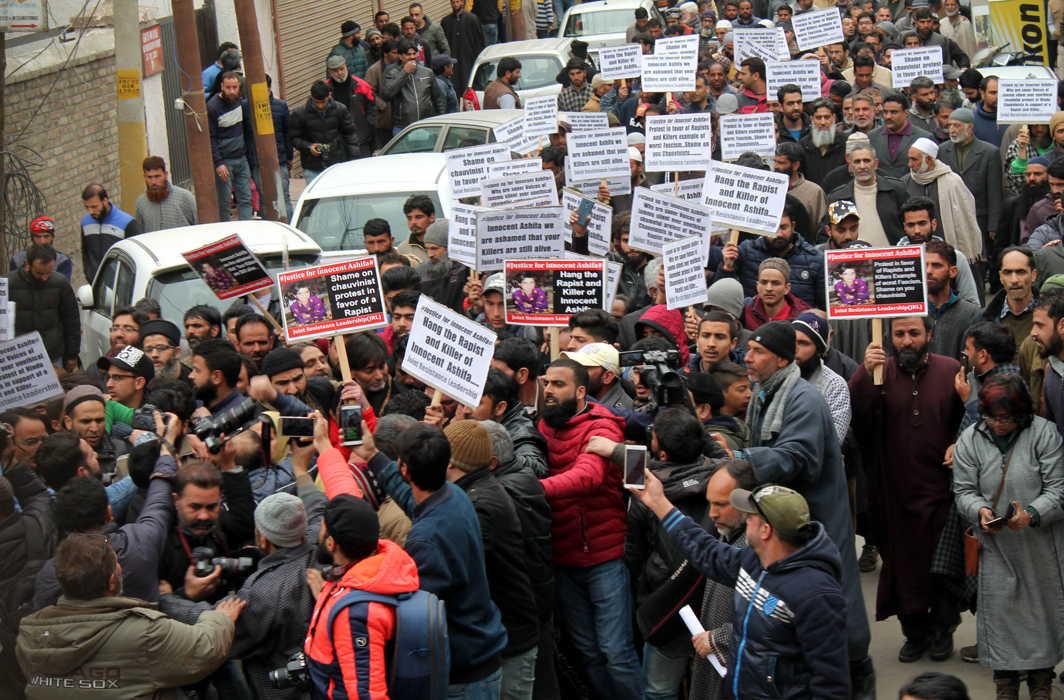 Above: A protest march against the gangrape and murder of a minor in Kathua in Srinagar/Photo: UNI

While the Supreme Court has voiced concern over rising incidents of rape, what is needed is a professional attitude in investigating them and understanding the behaviour of both the victim and the perpetrator

The Supreme Court is justly concerned about the rise in sexual assaults across the country. As each horror story unfolds, it seems to strike at the very root of our conscience as we are haunted by the same set of questions. Over the last 20 years, journalists, activists, police officers, judges and people from all walks of life have asked me: “Why are these crimes rising?”, “Why is nothing being done to arrest it?”, “Is there something inherently wrong with us as a society that this crime targets children in such an overwhelming way?”

While a new set of guidelines and use of technology to strengthen investigation and prosecution in cases of sexual assault are welcome, has the judiciary pondered what has stopped this from being implemented till now? Why is it that despite having facilities and infrastructure, these crimes continue with impunity? Are we a nation that springs into action after a set of rules and guidelines is issued? What has been the fate of guidelines issued earlier?

As someone who has worked for the rights of sexual assault survivors for 20 years, I see knee-jerk reactions every time a horrendous case shakes the nation’s conscience. And it is not followed by structural and functional changes so necessary for reformation. The absence of technology and infrastructure is just an excuse. Will the lament over lack of procedures make a difference? My experience with investigations in sexual assault cases tells me that they suffer from not just lack of tools but attitude too and this pervades all arms of the criminal justice system, especially law enforcement.

The first is the general belief that sexual assault crimes don’t require professional attitude, knowledge and mindset like other heinous crimes. Police officers privately talk of it more as a social issue to be spoken about in a hush-hush manner rather than dealing with it in a police station as a heinous crime.

Several years ago when I was conducting a psychological study on paedophiles in Delhi’s Tihar jail, the then D-G who later went on to become a police commissioner, told me in plain words: “What is there to research on this issue, Dr Sahib? A man feels deprived, doesn’t find a woman and grabs a girl. That’s all.” If senior police officers have such a regressive mindset, how will investigating officers develop a professional approach to sexual crimes?

I told him that the FBI had an entire behavioural science unit developed around paedophilic crimes, but it had no impact. “That happens in the US, not here,” he said. Yet paedophiles are some of the most cunning and suave criminals that roam around our cities and as long as we don’t realise this truth, we will continue to lose our battle against child sexual abuse.

The first lesson that we need to teach incumbent police officers is that sexual assault is one of the most complex of heinous crimes. This lack of understanding is perhaps one of the main reasons for poor investigation and low conviction rates. Police investigation is first and foremost a psychological process ba­sed on value for truth and entails detailed and painstaking questioning of survivors and perpetrators based on the principles of victimology. This means es­tablishing trust with victims and understanding the mindset of perpetrators. Everything else comes afterwards.

The second reason for low conviction is that rape is not seen as a behavioural crime. Time and again, I have found officers defining the crime scene in rape as the physical place where the crime took place, whereas actually the crime scene is the girl’s body. They say that this is what they are taught by their seniors. Yet in many countries, police officers investigating sexual assault cases are the brightest, and are highly trained in behavioural sciences to elicit cues alongside scientific interviewing. The trust they are able to build with the victim is a crucial determinant in the success of the case and why she/he cooperates and holds on till the end.

Today we are aghast at reports of sexual abuse in various shelter homes. Often, psychologists working with shelter homes have children who confide in them the abuse they have undergone. However, they are unable to take it forward despite telling the police about it.

Once, my team and I had gone to provide therapy to a girl staying alone at her home. She hadn’t ventured out for years. Her brothers stayed on other floors. By the fifth session, we noticed signs of sexual abuse on the girl. She gave pre-indicators, similar to other victims. We promptly reported this to the police and magistrate and said that she may be able to talk if she was able to come out of the home, away from the presence of her brothers. We petitioned the magistrate, who told us that unless the victim herself said that she wanted to go out and gave it in writing, we couldn’t take her out. Doesn’t professional feedback count? And this is a girl who is suffering from prolonged abuse and terror, has Post-Traumatic Stress Disorder and can hardly testify in an environment where she has been abused for years. The feedback of the magistrate was that we ask the brothers to go out, stay away for a certain period and ask our questions. When the girl didn’t say anything and kept quiet, he advised us to carry on the counselling.

When I share this example with my colleagues in the US, they say that such feedback by a professional would be taken seriously there and the girl would be separated and provided all possible support to enable her to make a disclosure.

There are two issues here. The legal community must have knowledge of psychological trauma and behavioural knowledge about the mindset of victims about sexual violation and its impact. That is routine abroad. I hope this will occupy a central place in the thought processes of the judiciary and the police. That should be the foundation of handling such crimes, backed by technical rules and methodology.

Law enforcement also has disdain for professionals who can help solve sexual crimes. There was a case of a child sexually assaulted on a wintery night in a park. Behavioural profiling of the suspect showed that he visited the crime scene at around the same time over the next two days. We passed this knowledge to the DCP, then to the SHO, who, in turn, promised to keep a constable in surveillance for the next 48 hours. How­ever, he withdrew him after a few hours and when the suspect came at the app­ointed time and started masturbating, he was seen by the watchman, who then raised an alarm. But the man got away. The SHO, on the defensive now, asked how we could prove in court that he was the offender even if they had caught him.

It is my fervent hope that a behavioural unit will be set up in India which provides scientific and cutting-edge data of the science on sexual assault to the judiciary and the police force.

Also, it is routine for guardians to refuse medico-legal examination of the victim after reaching hospital. Often, they are told by the policemen that their case will drag on for years and bring dishonour to their daughter. My team has gone through many difficult situations where the guardian has refused to proceed further either due to pressure from the police or a rapprochement offer from the accused. What is needed is a police force that is neutral and doesn’t mediate to resolve crimes of this nature. In one case, we were even told that we shouldn’t pursue the case because we might be accused of coaching the girl. The parents too changed their mind about taking the case ahead.

Should parents and guardians have the power to refuse a medical test for their children? The whole argument is based on the notion of a just society where parental consent rules supreme. Who will the child listen to if the parents tell her not to go ahead and ask her to retract her statement? When children are under tremendous stress, regressive mores of society and communal and familial pressure, how will they testify about their violation? By giving parents and guardians this much power, aren’t we making rules meaningless? Should we make the consent of parents so central and paramount? Can we call ourselves a rule of law society which holds parental consent supreme? This needs  deeper debate.