Last year, the government had submitted to the Supreme Court that no legislation would be introduced to ban explicit pictures on condom packets and ads. But there may be a rethink

Will the controversy over explicit condom ads, which occupied media and legal space last year, find a revival with the moral brigade upping its ante in the post-assembly elections scenario which has seen the BJP emerge triumphant? India Legal learns that the controversy, veritably put on the backburner, was not actually taken off the I&B ministry’s log and now that the election fever has died down, this issue may well be rejuvenated.

What could prompt a revisit of the issue is the directive from the Goa State Commission for Women (GSCW) earlier this month asking the Kadamba Transport Corporation Limited (KTCL) to remove condom advertisements featuring actress Sunny Leone from its buses. The GSCW directive comes following a petition filed by a Ranaragini, a women’s NGO. 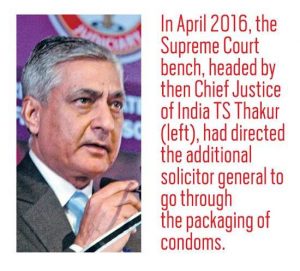 The buses of the state-run corporation replaced the Goa government’s social welfare scheme ads with the Sunny Leone ads from January 4 when the model code of conduct kicked in for the assembly polls. GSWC chairperson Vidya Tanavade confirmed that the order had been issued to remove the “objectionable” ad but no timeframe for doing so had been specified.

At the national level, it is the I&B ministry which deals with objectionable ads. It is not willing to spell out its current stand on the issue or the status of the earlier case still pending before it. When India Legal contacted the ministry’s broadcast division, which had initially mooted the ad pushback idea, Dr Vincent Barla, deputy secretary administration, could not provide any input. “We have no information on any further development on the issue,” he said.

But this magazine has learnt from a source that all work had been held up in the ministry because of “other pressing issues”, obviously referring to the assembly elections that just ended. The implication here is that the condom issue is expected to be given a re-look. However, the source made it clear that no indication in this regard has come from the minister’s level—Rajyavardhan Rathore is the minister of state.

So, the spectre will most likely be back.

The current condom controversy traces its beginning to a 2008 court order. The Madurai bench of the Madras High Court had then banned titillating pictures on condom packets in response to a PIL filed before it. The manufacturers, including the state-owned Hindustan Latex Ltd, had appealed to the apex court which granted a stay.

In April 2016, the Supreme Court bench, headed by then Chief Justice of India TS Thakur, while hearing the petition filed by the manufacturers had directed additional solicitor general Maninder Singh to go through the packaging of condoms, contraceptives and other wellness products to see if the pictures on them deviate from decency and are “actionable” for breach of laws against obscenity.“ You tell us whether action can be taken on these ads or not… Take a look at the advertisements available on record and also others and then tell us what is your stand,” the bench had said.

Any revival of the case would depend on how far the “sanskriti” or moral brigade can influence decision-makers.

But even as the final outcome of his inspection was awaited, the government submitted to the Court that it had no intention of passing further legislation on the issue since existing laws were capable of dealing with it. Quickly, things quietened down, providing relief to condom manufacturers, advertising agencies and dealers.

Justice Thakur’s directive to the additional solicitor general to examine the packaging of all contraceptive and sexual wellness products to ascertain whether they had objectionable visuals was a tad steep for the government. In its submission to the Supreme Court, the centre admitted as much: “It is respectfully submitted that the ministry of information and broadcasting does not have the mandate or mechanism to examine the advertisements in question and deal with them in any manner.”

An I&B ministry official had been quoted in the media as saying: “It is not humanly possible and practicable to go through each and every packet of condoms or contraceptives as there are hundreds of companies in the business.”

A close look at the regulations:

Currently no central statutory agency or uniform legislation exists for the advertising industry. The ad market is controlled by a non-statutory body, the Advertising Standards Council of India (ASCI).

According to laws governing advertising in India (as of August 17, 2012), Section 3.14 focuses on products Related to Sexuality (condoms, ED drugs, etc.) It states: “Advertisements related to sexuality are allowed with the provision that there should not be any indecent representation of women under the Indecent Representation of Women (Prohibition) Act 1986. Products must comply with the Drugs and Cosmetic Act 1940 and other certification rules under the Cable Television Network Rules 1994.”

Any revival of the case or the government revising its stand would depend on how far the “sanskriti” brigade can influence decision-makers. This brigade considers itself the guardians of Indian sanskriti (traditional moral and cultural values).

Even as the Supreme Court was hearing the petition from the manufacturers to dismiss the High Court order banning “provocative” pictures on condom packets and in ads, the I&B ministry mooted the idea of restricting condom ads only to late night TV. Apparently, the I&B ministry’s hand was forced by some right-leaning organisations into floating this proposal. It would apply to all condom ads, even those which show no skin or provide “titillation”. The ministry’s suggestion was ostensibly prompted by a “flood of complaints” from viewers, NGOs and even from politicians.

Those who object to condom ads and promotional material have their reasons for it. One school believes explicit condom ads promote free sex, whatever that means. The other points out that provocative condom ads, like the one featuring Sunny Leone, can encourage rape. They can also be a bad influence on kids. Then there is a third lot which recently managed to get condom ads banned from buses in Goa, because it was embarrassing women.

Condoms with staid packaging and safe sex messages on the packets which are distributed free among high-risk groups by the government has a downside, say sex workers. They simply do not want to use them. Having worked in a red light area for six years running an informal school for children of sex workers, this correspondent has seen cartons of free condoms going unused. Reason: “These condoms spoil the fun for clients. They either don’t use condoms or prefer those with sexy pictures on the cover,” explained a sex worker.

In fact, it was found that Hindustan Latex condoms distributed free were actually being repacked and sold across India as “foreign” products. Attractive packaging apparently did the trick.

Those who run campaigns against so-called provocative ads forget that condoms primarily serve as a birth control device. It also prevents the spread of STDs, hepatitis and in more recent times, HIV—all illnesses communicated through the exchange of bodily fluids. But by no stretch of imagination can condoms prevent sex. So, condom advertisements are not overstepping their brief if they promote safe sex.

The issue being raked up once again will not be good news for the prophylactics industry that has seen steady but rather slow growth. With the overall contraceptive market currently pegged at around $150-160 million, it still remains a fledgling industry in this country. Of the total contraceptive market size, condoms form a modest segment. Last year, the industry was just about recovering from a shock treatment that the government had given to it 2015 when it wanted to control pricing of condoms. The courts, thankfully, had rejected that proposal.