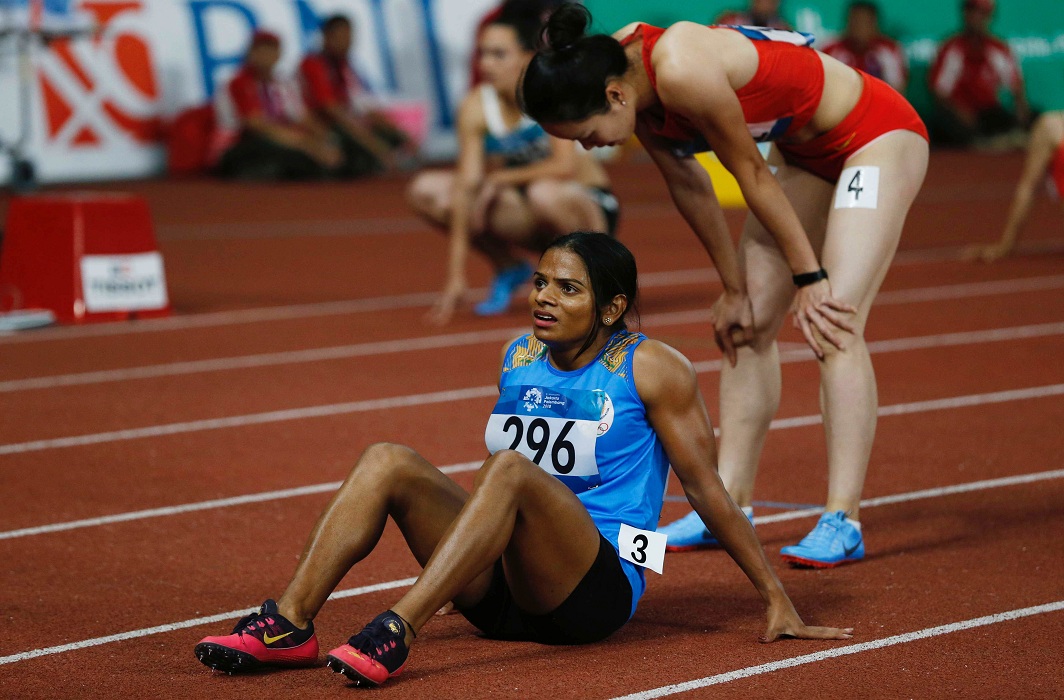 The Olympian’s Dutee Chand coming out about her lesbian relationship is part of the struggles that she has had to face. But is India ready to accept people like her despite striking down Section 377?

Last week, Taiwan became the first country in Asia to legalise same-sex marriages. This was seen as a harbinger of change in Asia. However, the bitter truth is that it will take a long time for the rainbow to emerge on the Indian horizon. Even as Taipei was celebrating, Olympic sprinter Dutee Chand’s coming out about her lesbian live-in relationship created a media storm of sorts.

Chand’s decision to come out publicly about her lesbian relationship and her desire to marry her “soulmate” has again brought to the fore the fact that striking down or decriminalising Section 377 was just a small victory in a long-drawn war. Sunil Mehra, one of the petitioners, who challenged Section 377 in the Supreme Court, is of the view that despite the verdict, the status of the LGBT community remains unequal. “It doesn’t give any spousal rights. You can’t marry or adopt. You can’t even get insurance or inherit. What it has done is that now cops can’t blackmail and snatch money from two boys caught in a public park,” he said. “It’s like throwing a bone to a dog. It’s like brick and mortar for the construction of an edifice of equality, which might come up in the future.” That is why it is courageous of Chand, he said, but added that she will have to fight her battle alone.

However, Dipta Bhog, an activist, did not agree with Mehra. She said that the striking down of Section 377 had removed a barrier and now people like Chand were pushing the boundaries further. “I think decriminalising Section 377 has made a huge difference as there is a community of people who are speaking out. It is partly also her (Dutee Chand) battle, but there are many waiting in the wings,” Bhog added. She said these relationships had existed for a long time in society, but people did not have the courage then to speak up because of societal pressures, but now things had changed.

Swarnlata Mahilkar, who works for gender equality, recently met Chand and found her confident about her decision. Mahilkar said Chand had worked against the odds to reach this stage in her sport. She had won many personal battles such as the ban due to her testosterone levels being higher than the guidelines permitted for female athletes. In 2014, she was banned by the International Association of Athletics Federations over hyperandrogenism. However, this was later overturned by the Court of Arbitration for Sports in Lausanne, Switzerland.

Mahilkar said: “Every person has the right to make a decision about her life, which depends on the situation in which she is in. In the case of Dutee Chand, she has taken a decision which is unconventional and bold. What she achieved for India and what she wants to achieve is a testament of her indomitable spirit.” However, she did not agree with the view that this was a new phenomenon as it is happening in rural areas.

Mahilkar said that in the LGBT group, there are people with different identities, choices and desires. She said it was wrong to think that people who take decisions which do not conform to societal norms only exist in big cities. “Such people also exist in rural areas.” She added: “Earlier, unfortunately, we were not allowed to speak or were afraid to speak about our choices, which is a very basic and personal right. In this regard, the Supreme Court’s decision on Section 377 was historic as it has given the people the courage to speak out. These things have been continuing for centuries but there was a fear factor. The Supreme Court decision has changed all that.”

Mahilkar is right. In fact, India Legal had a few months back reported the case of Rekha Bairwa and Usha Rai Mahar, a lesbian couple from a small village in Dausa district of Rajasthan, who got married at a local temple. After villagers harassed them, they approached the Rajasthan High Court for protection and personal safety. “While same-sex marriage is not legal in India, gender equality has many facets and this battle for an inclusive society has been going on and will continue and grow with the passage of time,” she said.

Mr Dean, a Singapore-based LGBT activist, who has been following the Dutee Chand case, told India Legal: “Although India has repealed Section 377, it still has a long way to go. What happened in Taiwan is just a one-off thing as only 20 countries share this status. Many countries, including India, are seen as ‘progressive’ but they are quite conservative on this issue. Apart from this, there is the pressure of religious groups, which every government is afraid of.”

He said that Singapore, despite having the Pink Dot Movement, had voted against the repeal of Section 377 of its Penal Code. This movement, incidentally, is an annual event which started in 2009 in support of the lesbian, gay, bisexual and transgender community in Singapore. He said: “There is still disdain regarding it even from within. Most of the noise is generated from the hetero-normative notion that there is a need to protect the ‘sanctity’ of marriage, when in fact, it can be called anything else. ‘Civil union’ is fine so long as the rights of homosexual couples are the same as those of heterosexual ones. And this includes the ability to make legal and/or medical decisions on behalf of a spouse, inheritance, adoption, etc… It’s especially relevant in countries and areas where people don’t like the idea of gay marriage.” Mr Dean said Chand may be a sprinter, but this race was more like a steeplechase riddled with hurdles and ditches. He was glad that she had decided to lead the pack.

However, India still has a long way to go.