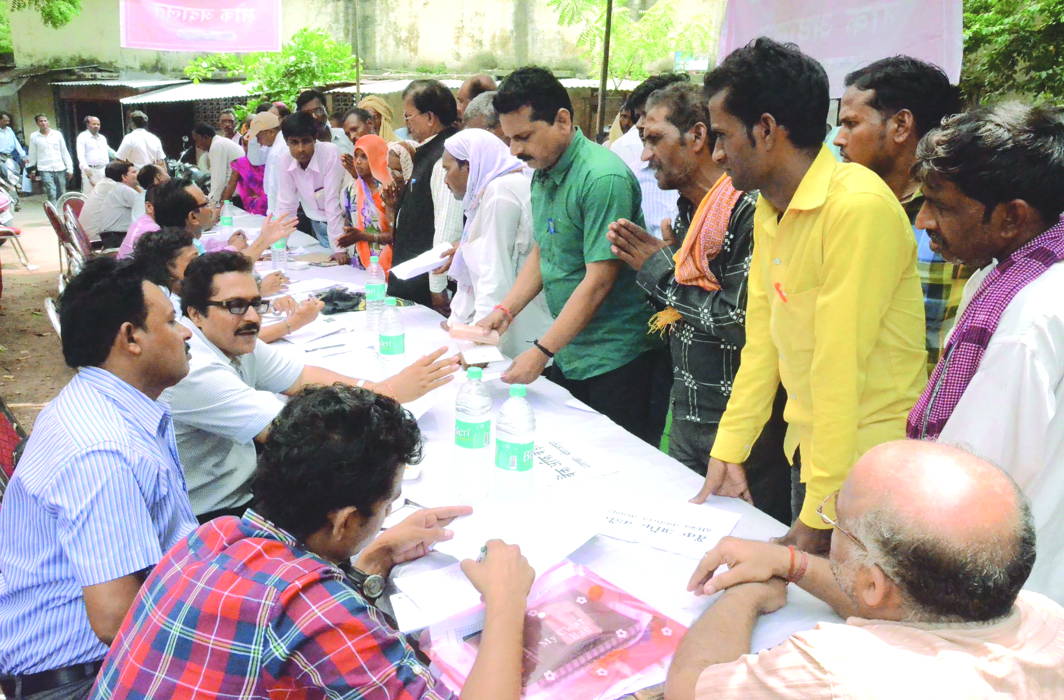 Above: Litigants at a Lok Adalat organised by the district legal services authority in Mirzapur, UP/Photo: UNI

~By Dr R Sasikalapushpa and Dr B Ramaswamy

“It is of fundamental importance that justice should not only be done, but should manifestly and undoubtedly be seen to be done.”

Justice—social, economic and political—is a preambular precept of the Constitution. The guarantee of equality of law and equal protection of law lies at the heart of the legal system. It has been universally recognised and iterated repeatedly by the Supreme Court that timely justice and speedy trial are facets of the right to life under the Consti­tution.

Ensuring equal access to justice is a constitutional mandate not just in terms of a fundamental right under Part III, but also a good governance directive under Part IV of the Constitution. Access to speedy justice and trial is a part of the right to life and personal liberty. It is one of the most important duties of a welfare state to provide judicial and non-judicial dispute resolution mechanisms to which all citizens have equal access for resolution of their legal disputes and enforcement of their fundamental and legal rights.

Article 39-A directs the State to ensure that the operation of the legal system promotes justice on the basis of equal opportunity and, in particular, provide free legal aid by suitable legislation or schemes. Right to free legal aid is an essential fundamental right guaranteed by the Constitution. It forms the basis of reasonable, fair and just liberty under Article 21 of the Constitution.

The purpose of administration of justice is that the innocent must be protected, the guilty must be punished and there must be satisfactory resolution of disputes. The right to speedy trial is recognised as a common law right flowing from the Magna Carta in the UK, the US, Canada, and New Zealand, though this view is not accepted in Australia.

Many international conventions have also approved of the importance of the right to speedy trial. Article 14 of the International Convention on Civil and Political Rights, 1966, and Article 3 of the European Convention on Human Rights, 1950, speak for this right. There is a need to enact laws providing for the right to speedy justice in civil matters.

Delay in justice denotes the time consumed in the disposal of a case that is in excess of the time within which it can reasonably be expected to be decided by the court. Difficulties arise when the actual time taken for disposal of a case far exceeds its expected life span. This amounts to a delay in dispensation of justice. Factual data shows that despite consistent efforts, the gap between the expected and actual life span of cases is widening. The chief reason for delays is that the judge-population ratio is low in India (see table). Other reasons include case adjournments granted by courts on flimsy grounds.

Delay in cases can be of two types:

The functioning of the judiciary is independent in nature but it does not mean it is not accountable to anyone. The apex court’s concern about problems in delay of trials finds reflection in the following judgments:

In Machander v State of Hyderabad, the Court refused to send the case back to the trial court for a fresh trial because of a delay of five years between the commission of the offence and the final judgment.

In Maneka Gandhi v Union of India, the Court held that Article 21 of the Constitution confers a fundamental right on every individual not to be deprived of his life or personal liberty, except according to procedure established by law. Such procedure as required under Article 21 has to be “fair, just and reasonable” and not “arbitrary, fanciful or oppressive”.

The apex court’s decision in Hussainara Khatoon v Home Secretary, State of Bihar is a landmark one in the development of speedy trial jurisprudence. In this case, a writ of habeas corpus was filed on behalf of persons languishing in jails in Bihar as they awaited trial. The Court gave a very progressive interpretation to Article 21 of the Constitution.

A constitution bench of the Supreme Court in Anita Kushwaha v Pushap Sudan identified four aspects that constitute the essence of access to justice—the State must provide an effective adjudicatory mechanism; the mechanism so provided must be reasonably accessible in terms of distance; the process of adjudication must be speedy; and access to the process must be affordable for the litigants.

Judicial capability can be judged by the time taken for disposal of cases. Time scheduling should be done such that there is effective management of time. Alternative options for settlement of disputes, like mediation, conciliation and settlement through Lok Adalats, which help in speedy disposal of cases, should be made effective. The number of judges in courts must be increased so as to minimise the burden of resolving cases on each judge.

The right to speedy trial is not fact or fiction but a “constitutional reality” and it has to be given its due respect. The judiciary and the legislature have already accepted it as one of the mediums of reducing the increasing workload of courts. Repeated delays and continuances in the criminal justice process prevent victims from ever reaching emotional, physical and financial closure from the trauma suffered as a result of the crimes perpetrated on them.

In Abdul Rehman v RS Nayak, the Supreme Court observed that ultimately, it’s the court which decides whether the right to speedy trial has been denied or not. In Madheshwardhari Singh v State of Bihar, it was held that all criminal prosecutions are now inalienable fundamental rights of citizens.

Finally, the State as a guardian of the fundamental rights of its people, is dutybound to ensure speedy trial and avoid excessive delays in the trial of criminal cases that could result in grave miscarriage of justice. Speedy trial is in public interest as it serves societal interest also.

—Dr Sasikalapushpa is an MP and Dr B Ramaswamy is Pro-Vice Chancellor, Oriental University, Indore (MP)