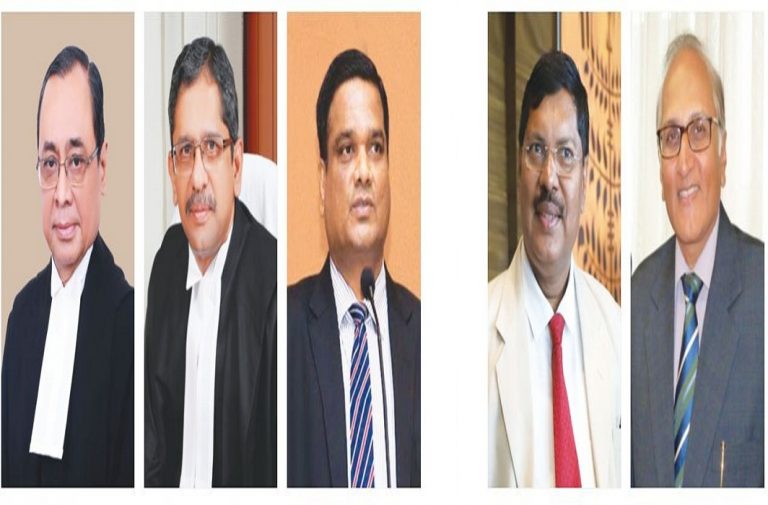 Above: The five Justices of the Supreme Court, who recused themselves from the Gautam Navalakha bail case, include Chief Justice of India Ranjan Gogoi, Justices NV Ramana, R Subhash Reddy, BR Gavai and S Ravindra Bhat

While this conduct causes constitutional concern, it is debatable whether recusal is an individual affair of judges or of institutional interest. Should judicial oath be a barrier to recusal behaviour?

The recent spate of standing down, where as many as five Justices of the Supreme Court recused themselves in four days’ time from hearing a case is unprecedented in the annals of the Supreme Court. On September 30, 2019, Chief Justice Ranjan Gogoi recused himself and on October 1, 2019, all the three justices—Justices NV Ramana, R Subhash Reddy and BR Gavai—recused themselves from the Gautam Navalakha bail case. (This comment offers no observations at all on the matter which is now sub judice). A little later, Justice Ravindra Bhat also recused himself in a bench comprising himself, Justices Arun Mishra and Vineet Saran. Now, the matter is before Justices Arun Mishra and Deepak Gupta. No doubt, the learned Justices may have proceeded for the best of reasons, but the public will never know why recusals occurred (as no reasons were given) though this unprecedented conduct causes deep constitutional concern.

Of course, as Justice Jerome Frank noted (in Linehan, 2d Cir. 1943): “[T]here can be no fair trial before a judge lacking in impartiality and disinterestedness.” But he also warned, immortally, that “bias” and “partiality” may not be defined to mean the “total absence of preconceptions in the mind of the judge” because “no one has ever had a fair trial and no one ever will”. Justice Frank significantly added: “The human mind, even at infancy, is no blank piece of paper…We are born with predispositions … Without acquired ‘slants’, life could not go on. Interests, points of view, preferences, are the essence of living… [some of these interests] represent the community’s most cherished values and ideals… and are part of the legal system itself.”

But such “slants” may never override what the Supreme Court of the United States offered as a classic test (Tumney, 1927): “Every procedure which would offer a possible temptation to the average man as a judge to forget the burden of proof required to convict the defendant, or which might lead him not to hold the balance nice, clear and true between the state and the accused, denies the latter of the due process of law.”  The “possible temptation to forget” provides a good test in criminal cases, though it has been labelled “opaque” by some academic critics. But the maxim remains, as Justice Black has said (Murchison, 1955) “…to perform its highest function in the best way, ‘justice must satisfy the appearance of justice’.”

It is astonishing that the NJAC case, though relying more on British cases, has been ignored consistently by the High Courts (for example, seven Gujarat High Court judges recused themselves in the 2016 Naroda Patia appeals) and now the SC has itself done so! But recall that the NJAC case is made possible only by a primary ruling concerning when and indeed whether individual justices should recuse themselves.

It is debatable whether in India there is a long-standing convention treating recusal as an individual affair of Justices as if the court as an institution is not involved. The institutional interest becomes, of course, engaged when there is an allegation of manifest pecuniary bias or any other possibility of conflict of interest. Nor is it the convention that lawyers may exonerate the judge of any, even pecuniary, bias by stipulating that they have complete faith in a judge (as happened when Justice JC Shah disclosed the puny shareholding he had in the affected banks in the Bank Nationalization or as Justice SH Kapadia did in Novartis). In both the cases, the litigating lawyers expressed faith in the neutrality and impartiality of the judge.

However, it was never a matter of lis or constitutionality till the advent of the decision in Subrata Roy Sahara (2012). There, Justice JS Khehar (and Justice KS Radhakrishnan) confronted the convention with the judicial oath of office under the Third Schedule of the Indian Constitution. Justice Khehar strongly deprecated recusal as the essence of “[C]alculated psychological offensives and mind games” which needs “to be strongly repulsed” and recommended a “similar approach to other Courts, when they experience such behaviour”. They further held: “[…] not hearing the matter, would constitute an act in breach of our oath of office, which mandates us to perform the duties of our office, to the best of our ability, without fear or favour, affection or ill-will.”

Justice Khehar followed his own logic in the NJAC case: he scoffed at the idea that recusal be available at the instance of a litigating party as that violates the judicial oath under the Third Schedule of the Constitution—the “oath to discharge…duties without fear or favour”. A judge breaches the oath in thus recusing, unless manifestly “justified”.

In the NJAC case, apparently, Justice AR Dave recused himself because he became an ex-officio Member of the National Judicial Appointments Commission (NJAC), being the second seniormost judge after the CJI. But all Justices, whether actual or potential members either of the Collegium or the impugned NJAC, could be said to be officially interested in the outcomes that retained the power of elevations (and transfer of High Court Justices) unto themselves!

On the wider question of institutional or official bias (codified by the apex court itself in Indian administrative law), Justices J Chelameswar and AK Goel ruled against the argument that judges were possessed with “significant power” of recusal. If accepted, this argument would render all the Judges of this Court disqualified from hearing the present controversy”—not a “result” legally permitted by the “doctrine of necessity”. The invocation of this criminal law doctrine to the constitutional law is not as fanciful as it may sound: after all, if the judicial oath is to have some meaning (if it is not to be an empty signifier), should it not act as a constitutional barrier to recusal behaviour?

Justice Kurian Joseph, additionally urged that “a Judge is required to indicate reasons for his recusal” to promote transparency and accountability which stem from the “constitutional duty, as reflected in one’s oath”.  This would also help to “curb the tendency for forum shopping”, more so because judicial recusal applications are “gaining frequency”.  However, Justice Madan Lokur disagreed saying that “fresh rules” are needed and “it is time that some procedural and substantive rules are framed in this regard. If appropriate rules are framed, then, in a given case, it would avoid embarrassment to other judges on the Bench”.

The discourse leads to one central conclusion: recusal is permissible only when there is “real likelihood” of pecuniary bias or of conflicts of interest. In both these situations, when necessary, the Brethren may sit on judgment concerning the institutional consequences of individual judicial recusal (or non-recusal) conduct.

The only problematic aspect is recusal based on “conscience”. Is institutional integrity better served by allowing individual conscience to prevail over judicial oath or by a resignation from judicial office? Can the judicial conscience be fettered by the constitutional duty to adjudge?  Should the Brethren or the Bar be allowed to override individual judicial conscience? What may be said to be the ethical obligations of the Bar in this regard? Finally, would a rule made by the Court and/or the legislature ever solve the issue of conscientious recusal? Or should we simply affirm with Eugen Ehrlich (a founder of sociology of modern law) that the “best guarantee of justice lies in the personality of the Judge”?

Even if that be a just response, it does not quite get around Article 141 of the Constitution which makes the law declared by the Supreme Court binding on all courts throughout the territory of India. That article does not exempt the Supreme Court itself! This is because the Supreme Court has itself subscribed to the idea that the obligations of minimal institutional integrity stand fully crystallised by the theory of precedent: prior decisions of a larger bench control the decisions of smaller benches.

If the law “declared” in the NJAC case on recusal is considered worthy of further revision, the CJI could constitute a lager bench to review it. But surely, a total inadvertence of this judicial discipline violates the doctrine of stare decisis (determining points in a litigation according to precedent) also prescribed as judicial duty?

Is not the present decision per incuriam (characterised by lack of due regard to the law or facts)?