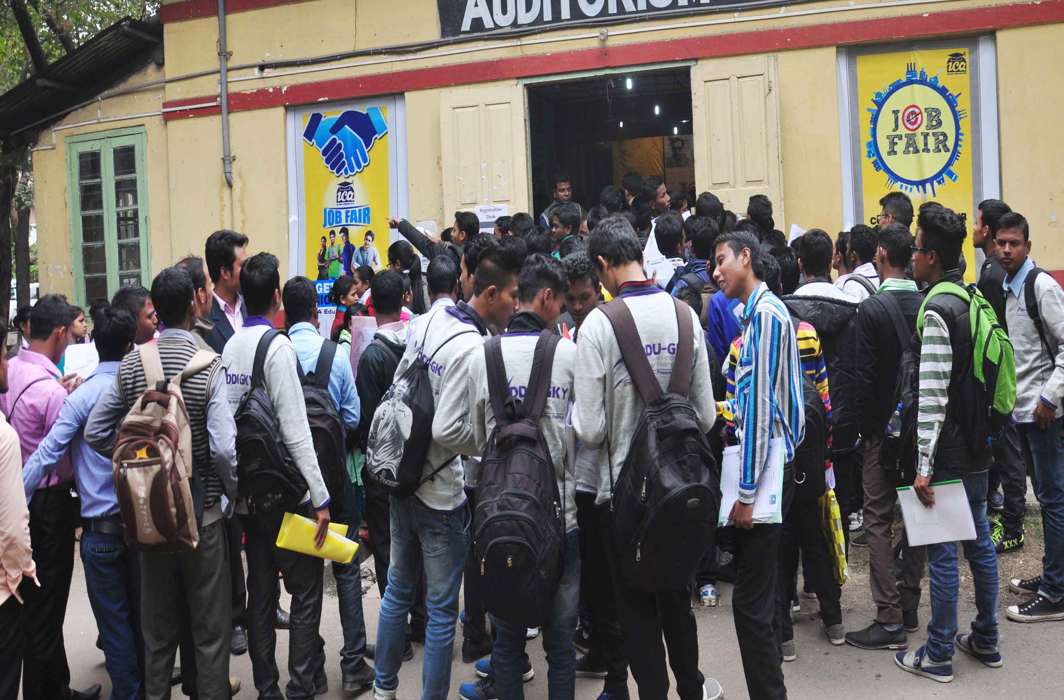 Above: Queues of youngsters gathered at a mega job fair in Guwahati/Photo: UNI

It is a myth that the government can stimulate the economy and create jobs. When unseen costs are factored in, for every one job created by the government, three jobs are destroyed in the private sector

People who refuse to accept unpleasant truths about the limitations of government, should not be concerned about politicians who lie to them….

There are many myths in economics, but perhaps the most pervasive is the notion that the government can create jobs. Politicians always promise jobs to win over voters. In the run-up to the 2014 Lok Sabha election, PM Narendra Modi promised 10 million jobs, but by the end of his five-year term, there were more people unemployed than at any other time in 45 years.

Modi was unable to “create” the jobs he promised. As a result, committees were set up to identify “priority areas” for government stimulus and subsidies, and new schemes are on the anvil to “fix” the economy.

And therein lies the problem. The harder a government tries, the more schemes it conjures up, the more stimulus it provides and the more regulations it passes in the process, the more damage it does to the economy. The economy is a complex ecosystem with millions of stakeholders and many moving parts. There are many interconnected variables—inflation, interest rates, productivity, employment, money supply, foreign reserves, exchange rate, exports, bad loans—the list is long. If the government tries to affect one variable, it often ends up adversely affecting another.

Just as it is with a complex system like nature, it is also virtually impossible to “manage” an economy. Like an invisible hand that guides the synergistic interdependence of plants, animals, air and water in nature, there is also a spontaneous order that comes with free markets in which systems such as the economy, labour and capital markets, etc, function best without human meddling. Nobel-winning economist Friedrich Hayek argued that “governments and central planners cannot hope to impose an economic order more attractive and beneficial than the order known to arise spontaneously from a well-functioning market system.”

That is not to say that the government doesn’t have a role in economic growth and job creation—it does, and it is an important one. But it is not in the micromanagement of the economy but in the creation of an environment that preserves the economic freedom required for free markets to work most efficiently. A government’s role is, therefore, more about “prevention” of disorderly systems that impede the efficient operation of free markets like monopolies, price fixing cartels, corruption, cronyism, rent extraction, negative externalities, etc. Good governments create just enough rules and laws to ensure the smooth operation of free markets and allow spontaneous order to create self-correcting optimal systems.

There is one thing all economists agree on: Economic growth comes from ideas, innovations, institutions and attitudes all juxtaposed on a set of fair laws that protect private property and intellectual capital. And it is the private sector with its professionally managed companies, innovators and risk-takers that is best suited to create economic growth and jobs. The government does not produce growth, and therefore, cannot create jobs.

The best governments adopt clear, well defined, consistent and limited pol­icies that encourage the private sector to take risks and create jobs. The worst gov­ernments kill all incentives for private growth by overtaxing businesses and creators of wealth, reducing economic freedom by increasing the regulatory burden and crowding out capital for private industry through overspending, debt borrowing and weak financial institutions.

As the Modi government gears up to “fix” a slowing economy, let’s examine the myth about job creation and economic growth. Can a government create jobs by stimulating the economy, and is this job creation a good thing for the economy? There is a famous anecdote that best answers this question. In 1972, on a trip to China, Nobel prize economist Milton Friedman saw hundreds of workers digging a canal with shovels. He was curious why they weren’t using more efficient earth-moving equipment and was told that it was because “it was a government job-creation programme”. Friedman’s retort was: “Then why don’t they use spoons instead of shovels—they will create more jobs.”

Something similar may be happening in India with the MGNREGA programme which guarantees rural employment but doesn’t create much wealth. Creating jobs is relatively easy—both MGNREGA and the Chinese employment programme are examples—but the most economic progress comes not when we create jobs but when we destroy jobs that we longer need. When Henry Ford first invented the automobile, he faced huge opposition because his innovation would put a lot of horse-buggy drivers out of work. And while many buggy-driver jobs were lost, a new industry was created that has, over time, added millions of jobs and created billions in wealth across the globe. The history of human development demonstra­tes how, through relentless turmoil, the economy re-creates itself, shifting labour resources to where they are most req­uired, replacing old jobs with new ones.

Economic progress happens, paradoxically, when new innovations eliminate jobs that become unnecessary. Innovation makes workers more efficient—they can produce more for less—and over time, the gains in new opportunities from innovation are far greater than the reskilling costs imposed by the temporary unemployment.

In 1900, nearly 40 percent of the human population was involved in some form of agriculture. Today, because of innovation in equipment and technology, it takes just eight percent of the human population to produce three times as much food as was produced in 1900. What happened to all those agricultural jobs? Those people got retrain­ed for better value-added jobs, which enhanced the wealth of the nation. Instead of toiling in the fields, those workers are now producing computers, appliances, new homes, medical devices, video games, movies, gourmet meals and a wide array of other goods and services. This, in turn, has produced vast amounts of wealth and raised millions from poverty. Every time we figure out how to accomplish a goal using fewer workers, it enriches society, because labour is a valuable resource.

Why then do governments insist on creating jobs instead of skill enhancement? Because that is visible. The government promotes the illusion that its involvement is required to create jobs and reduce unemployment. When the Railways hires 90,000 people, that job creation is the “seen”. But what remains “unseen” is the opportunity cost of that capital—where did the money come from to pay for these jobs.

Government jobs are financed from taxes paid by the private sector. The more jobs the public sector creates, the more money it will require to collect in taxes from the private sector to pay for these jobs. Hidden in the “government creates jobs” myth are jobs that the private sector companies would have created had they been able to invest the money they were forced to pay in taxes.

Studies show that when unseen costs are factored in, for every one job created by the government, three jobs are des­­troyed in the private sector. This may partly explain why un­employment went up in the first Modi term. In its desire to influence eco­nomic outcomes, the government dramatically increased its spen­ding. But that came at the cost of reduced job creation in the private sector. The opportunity costs for an exp­anding government sector were borne by the rest of the economy, which slowed private sector investment and job creation.

Here is the bottom line: The government does not create jobs. It merely replaces jobs created by the private sector. But every government believes that it can create jobs and help the economy. This is a myth because it is productive activity and not jobs that create wealth. Jobs are a second-order effect. If there is production in an economy, there will be job creation. The focus, therefore, should be on creating productive opportunities in the private sector and jobs will follow as a result. In a healthy economy, the state serves the needs of private endeavour, not the other way around.

Government jobs typically make a negative contribution to aggregate productivity because government workers generally produce well below their private sector counterparts. The Railways is India’s largest employer but many of those jobs are unproductive—a peon sitting outside an officer’s door all day adds no wealth to society. If that peon had not been hired, the taxes required to pay for his salary could have been used to create private sector jobs and produce new widgets adding to the GDP.

Less government and more free markets could transform India into a $5 trillion economy by the end of Modi’s second term in office. The alternative—government getting bigger and trying to create jobs—will only be another lost opportunity.