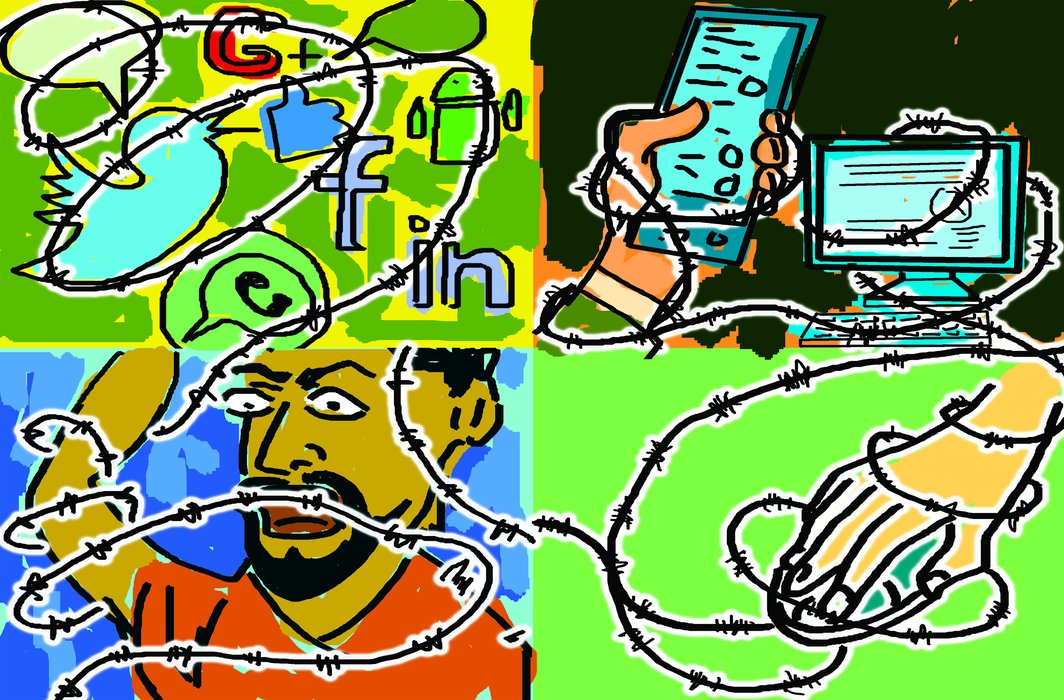 The Supreme Court has declared that access to the internet is a fundamental right protected under Article 19 of the Constitution. The ruling is in sync with UN recommendations

The Supreme Court did not examine whether access to the internet is a fundamental right as this issue was not raised by the petitioners. However, it was held that “Freedom of Speech and Expression through the medium of internet is an integral part of Article 19 (1)(a)” and the Supreme Court has thus formalised access to the internet as a part of fundamental rights and has held that the government cannot deprive citizens of any fundamental right, except under certain conditions. This ruling came during a hearing of a plea in connection with the internet blockade in J&K since August 5, 2019, after the revocation of Article 370.

Our Constitution guarantees freedom of speech and expression as a fundamental right for all citizens under Article 19(1)(a). The latest expansion of this right makes this constitutional provision keep pace with innovation of technology in as much as the internet has become the primary source of information for millions of citizens.

The State can make laws for imposing res­trictions on the right to freedom of speech in the interest of the sovereignty and integrity of India, the security of the State, friendly relations with foreign states, public order, decency or morality or in relation to contempt of court, defamation or incitement to offence.

Section 144 of the CrPC authorises executive magistrates to take preventive steps for the prevention of breach of peace. These include ban on assembly of more than four persons, ban on processions, use of water cannon and even curfew and shoot-at-sight orders. It has to be seen whether such orders affect freedom of speech.

The Supreme Court has said that prohibitory orders issued under Section 144, CrPC, cannot be used indefinitely to suppress freedom of speech and expression. The freedom of the press, as part of freedom of speech and expression, is a valuable and sacred right, hence magistrates, while passing prohibitory orders under Section 144, CrPC, should apply their mind and follow the doctrine of proportionality.

Such orders cannot be used to quell dissent, and repetitive clamping of such orders may amount to abuse of powers. Such orders should be revoked if no longer required, in accordance with the preventive spirit of the law.

It is surprising that all orders passed by the J&K administration under Section 144, CrPC, were not even produced before the Supreme Court.

Hence, the Court directed the State to publish all orders in force and any future orders under Section 144, CrPC, and for suspension of telecom services, including internet, to enable the affected persons to challenge the same before the High Court or an appropriate forum.

It also directed a review of the need for continuance of any existing orders passed under Section 144, CrPC.

Our Constitution also guarantees the fundamental right to practise any profession, or to carry on any occupation, trade or business under Article 19(1)(g).

Today, professional practice, trade and businesses are to a large extent internet-based. Online business is burgeoning: tickets for airlines, train journeys, cinema and music shows, museum visits, taxis, doctor visits, hotels, household requirements like vegetables and milk, passports and visas, not to speak of payment of utility bills like electricity, piped gas, phone and water bills, are all paid for online.

In the backdrop of the above dimensions of trade, the Supreme Court has rightly held that since the internet has become an important tool for trade and commerce, “freedom of trade and commerce through medium of internet is also constitutionally protected under Article 19 (1)(g).” This automatically circumscribes these rights by the restrictions prescribed under Article 19 (6).

Blockade of the internet directly affects essential services like hospitals and education. Kudos to our Supreme Court that in this milestone judgment, the three-judge bench, headed by Justice NV Ramana, has directed the J&K government to restore internet services in institutions providing essential services like hospitals and educational institutions, and to review all orders imposing curbs in the UT of J&K within a week and to review all orders suspending internet services forthwith.

The restrictions imposed by the government upon any fundamental right should be in consonance with the mandate of Article 19(2) to (6) and it must stand the test of proportionality because reasonableness demands proportionality. A law or executive order which curtails any of the fundamental rights without appropriate justification will be classified as disproportionate. In order to balance the right to access to the internet and restrictions to be imposed, the Court adopted the line that access to the internet should be the norm and deviations could be allowed in the interest of public order and safety provided they are temporary, proportionate and justified by reasons which are spelt out clearly and are reviewed periodically.

Indefinite suspension of net services is impermissible according to the Supreme Court. The degree and scope of restrictions, both territorial and temporary, must have a clear nexus with the necessity to combat an emergent situation. Suspension of internet services directly affects right to education also because education is not possible without the internet. It affects education at primary level since you need to download BYJU’S app for primary education.

It badly affects education at the higher level, especially research level, where one is totally handicapped without the internet.

Although this judgment of the Supreme Court has come in the context of J&K, it will have far-reaching consequences for the country in times to come, because the law declared by the Supreme Court is binding on all subordinate courts and authorities within the territory of India by virtue of Article 141 of our Constitution. This is a welcome judgment in as much as it will curb the hegemony of the government to block internet indefinitely in an arbitrary manner and an era of looking at fundamental rights in the light of new technologies will begin.

Temporary Suspension of Telecom Services (Public Emergency or Public Service) Rules, 2017, framed under Section 7 of the Indian Telegraph Act, 1885, provide for suspension of telecom services and consequently the suspension of internet services in India.

Such order, suspending internet services should expressly be made subject to judicial scrutiny by amending the above-mentioned rules. The word “temporary” in the rules of 2017 indicates that suspension must not extend beyond the requisite duration.

Another aspect of the order of the Supreme Court will be for media persons, exercising free speech on social media. They will be held accountable for their words if they fall foul of any of the restrictions enumerated in Article 19 (2) and (6) of the Constitution of India because “your right ends where mine begins,” is an adage which social media users must keep in mind before sitting down to write or troll.

One has to be mindful of the restrictions circumscribed under Article 19 (2) to (6) while using social media as a platform to profess opinions.

After the January 10 ruling, the central government, and the government of UT of J&K have implemented the directions and internet facilities in certain areas of J&K have been restored, albeit for a brief period of seven days, after which there will be a review.

Be that as it may, it appears that today’s life is unimaginable without the internet and apprehensions of its misuse by anti-social elements cannot be ruled out completely.

All said and done, the Supreme Court is the true guardian of fundamental rights of citizens and through this judgment, the highest court has held that in this day and age, the internet is as essential as air and water.