The former Supreme Court judge has taken over as the chairperson of the National Company Law Appellate Tribunal. He had retired from the Supreme Court this July. His vast experience and “welfarist and humanist” approach will be much needed at the tribunal. Earlier this year, APN channel and India Legal had organised a farewell function for Justice Bhushan after he retired from the top court. Several panellists spoke about his life and contributions as a judge. 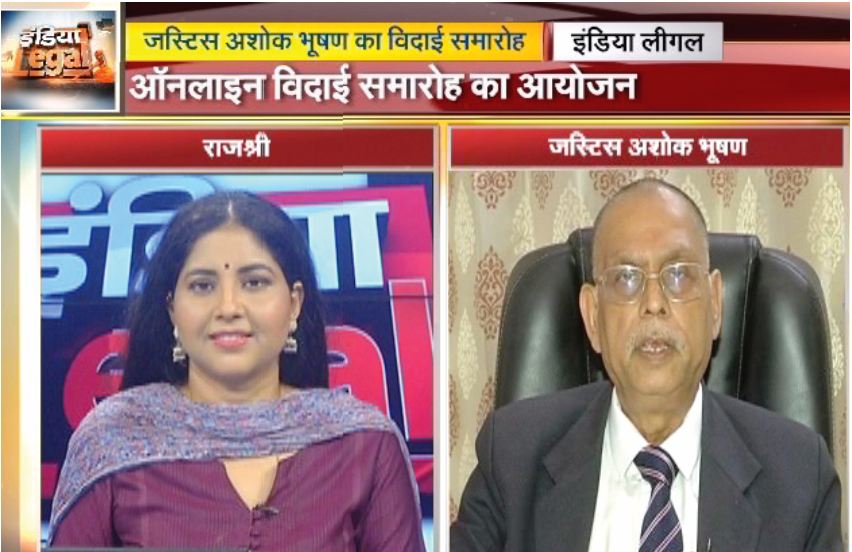 Former Supreme Court judge Justice Ashok Bhushan has taken over as the chairperson of the National Company Law Appellate Tribunal. Justice Bhushan had retired from the Supreme Court on July 4, where he had led the bench that was monitoring the Covid-19 management and relief throughout the pandemic days. He was also a part of the five-judge bench that had delivered the verdict in the Ayodhya case. Few know that Justice Bhushan authored the 116-page long addendum in the judgment, detailing how the disputed land was the birthplace of Lord Ram.

Justice Bhushan always strictly followed legal principles, yet never forgot social concerns. He was upright and showed no hesitation in expressing his views through his decisions. He was also part of several other important judgments, including the 2018 Aadhaar verdict, the 2021 one nation, one ration card scheme, the 2021 loan moratorium order and the 2021 striking down of the Maratha quota via SEBC.

The CJI while bidding farewell to Justice Bhushan said that he was always a “valuable colleague” and his judgments stand testimony to his “welfarist and humanist” approach, reflected in his opinions and writings. He said that Justice Bhushan will be remembered and thanked for his judicial contributions and has been a great value addition to the higher judiciary. He has spent nearly two decades delivering justice in constitutional courts and his journey has “truly been remarkable,” the CJI observed.

Venugopal said that Justice Bhushan led from the front in efforts to mitigate the sufferings and hunger of people during the pandemic, be it in the form of community kitchen or nudging the government to provide transport and shelter to migrant workers.

Rai spoke about the career of Justice Bhushan and elaborated on his achievements.

“He was a wonderful leader of the Bar and an upright judge who encouraged juniors and gave patient hearing to the parties of the case. He has been a firm judge with strong convictions and beliefs. I remember a matter of chief secretary of Uttar Pradesh in relation to the Noida land scam in which I was appearing for the UP government. Justice Bhushan was sitting in a bench as Additional Judge presided over by the Chief Justice of Allahabad High Court, AN Ray. We got the judgment of AN Ray first which was completely in favour of then chief secretary Neera Yadav. However, to our utter surprise, Justice Bhushan delivered a dissenting judgment that shows the courage of a young Additional Judge who was yet to be confirmed as a judge and that confirmation was to be recommended by the same chief justice. I observed that despite that judgment, Justice Bhushan was the choice of Justice Ray to be the part of his bench and that remains for his entire tenure.”

PH Parekh, president of Confederation of Indian Bar, said: “He was liked by all the members of the Bar. He gave a patient hearing to all members of the Bar. No advocate returned from his court with the impression that he was not properly heard by the judge. He gave excellent judgments at the Supreme Court.”

Manoj Mishra, VP, SCAORA, said: “Justice Bhushan was former vice president of the Allahabad High Court Bar Association. We have witnessed Justice Bhushan during his tenure in the Supreme Court where he has commanded great respect from the Bar and Bench. He had delivered several judgments in the time of pandemic dealing with human aspects and social responsibility.”

Amrendra Kumar Singh, Ex-Executive Member SCBA, commented: “Justice Ashok Bhushan is an extraordinary human being who cares for younger members and lady members of the Bar as his own family member. He does not ignore a single fact which may be relevant for the matters. Justice Bhushan has gathered great respect from the Bar because of his independent, unbiased working with impeccable integrity.”

Justice Bhushan’s father Chandra Prasad Srivastava was an advocate in the Allahabad High Court. Justice Bhushan was born on July 5,1956, in Jaunpur, Uttar Pradesh. In course of life, he was married to Sushma Bhushan who remembered her husband’s uprightness and morals. She said: “He was honest to the core. He never did any work which would blemish his image. He never took fees from poor clients. He gave excellent judgments at the Supreme Court. Due to his hard work, he got appointed as a Supreme Court judge and made a name for himself and his family. When he got transferred to Kerala as a judge before being appointed as a judge of the Supreme Court, he did commendable work there as well.”

Justice Bhushan did his graduation in 1975 and then studied law from Allahabad University in 1979. After this, he started practising in Civil Law. Thereafter, he became a High Court judge. On April 24, 2001, he appointed a permanent judge.

Sunita Bhushan, sister of Justice Bhushan said: “Our brother was always a guide and torchbearer for us in life. We look up to him in high regard. He has held high positions but pride never touched him. He gave important judgments like in Ayodhya case, and he has made us proud.”

Sarita, the youngest sister of Justice Bhushan remarked: “He has done his best for his country, state and family. We are so honoured to have him as our brother. He never did anything to hurt someone. He has been a beacon of light for the community.” Adarsh, son of Justice Bhushan said: “His simplicity is remarkable. Throughout his life he has maintained a high standard of conduct. He life is an inspiration for us.”

In his farewell speech, Justice Bhushan remarked on his long and illustrious career. He said:

“I had the privilege at the Supreme Court to serve the nation and the cause of justice with the best of judges. We judges and lawyers belong to a privileged class of society. God has chosen us to bring succour to people who have been wronged and provide justice to them. I always advised young advocates to cultivate composed wisdom to correct injustice, show warm compassion and empathy towards others and have the determination to ensure justice for all.”

The appellate tribunal, NCLAT, is going to have a permanent chairperson after a gap of almost 19 months. Clearly the assignment is going to be challenging. Justice Bhushan will be with the NCLAT for a period of four years from the date he takes charge of the post, or till he attains the age of 70 years, whichever is earlier.