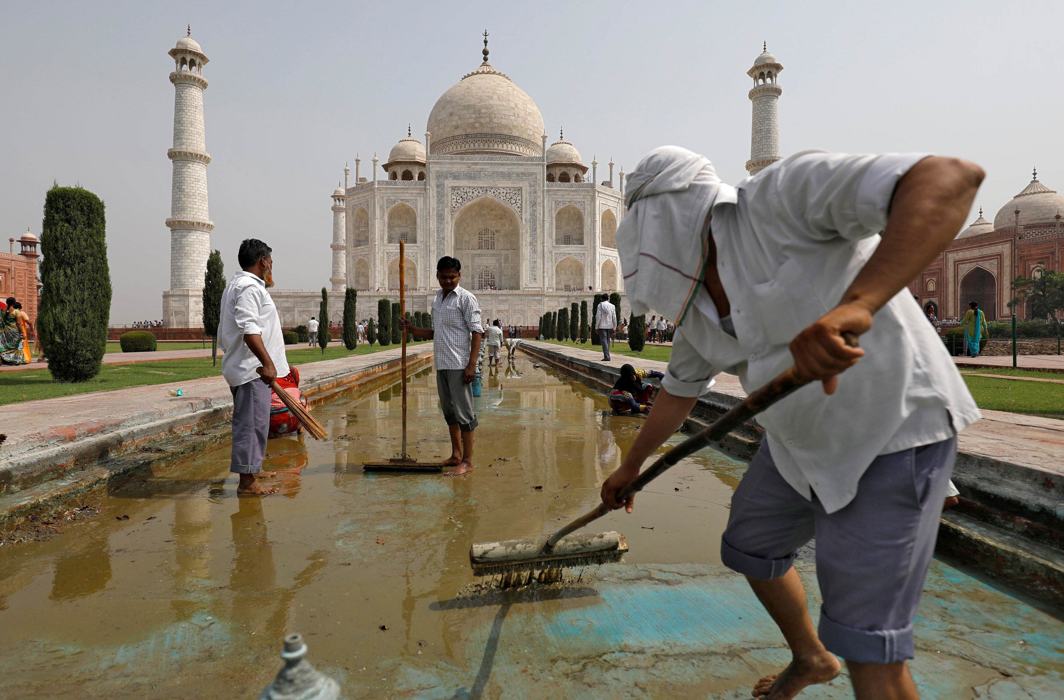 Above: The book gives a lot of attention to the Taj Corridor case where the SC saved the Taj Mahal from further degradation/Photo: UNI

The book by Dr Krishan Mahajan, a professor of law, suggests that the time has come to amend or make a law which will make protection of monuments a way of protecting fundamental democratic rights

Cultural property is an orphan area of Indian law, although some attention is now accorded to traditional knowledge in teaching, research, and the policy of intellectual property rights. Dr Kabir Sanjay Bavkiatte and Professor Thomas Bennett have now proposed a new set of biocultural (human) rights which signify “a community’s long established right, in accordance with its customary laws, to steward its lands, waters and resources”. Such rights “are not simply claims to property, in the typical market sense of property being a universally commensurable, commodifiable and alienable resource”. Rather, “biocultural rights are collective rights of communities to carry out traditional stewardship roles vis-à-vis nature, as conceived of by indigenous ontologies”. In this sense, biocultural rights belong to (what is now called by the UN) a world of “post development”.

Whether protection of monuments belongs to this set is an interesting question but cognate remains Dr Krishan Mahajan’s recent work, Legally Victimising National Monuments, which addresses the collective ways in which Parliament, the Union government and the Supreme Court together may be said to have “legally victimised monuments” (Chennai, Notion Press, 2018.) This is a brave and bold indictment, based on a triple assertion of rights and duties under the Constitution. First, the right to protection of monuments is an integral aspect of the rights guaranteed under Articles 25, 26 and 29. Second, Article 49 casts a constitutional duty to protect national monuments, but has been read by the political executive as merely conferring power. Third, the fundamental duty of all citizens under Article 51(f) requires them to “value and preserve the rich heritage of our composite culture”. Why may not the State managers and instrumentalities, the apex court and citizens take a “holistic” interpretation of the Constitution?

There seem to be two implications arising from this approach. Dr Mahajan maintains that the fundamental duty to “value” and “preserve” composite culture entails that the Indian State should so act as to ensure that “the composite culture of all such monuments put together does not get defined by only one religion”. No more principled advice may be soundly offered. But as underscored fully by the author himself, the nature and number of protected monuments in India is yet to be fully ascertained and a “culture of illegality” prevails where the local villagers have no say in deciding what, why, and how national monuments are declared and maintained. And this culture also engulfs forced necessitous migration to cities. This ensures that they become slum dwellers and informal labourers, scarcely consulted or concerned with national monuments’ policy, law, administration and interpretation. Thus, the entire field is dominated by a colonial and not constitutional approach. Indeed, the Ancient Monuments Act, 1958, is broadly a replica of a 1904 British India Act which merely gives the power to make law or regulation but is unconcerned with people’s rights, freedoms, participation and justice.

Dr Mahajan urges us to move away from this “monuments as objects” approach to a fundamental right to culture approach that can be read into Article 29 and further the fundamental duties of citizens to value and preserve the “composite culture” of India. But this shift has not been normatively considered even by the apex court. Instead, the Court broadly adopted a third approach—the environmental protection approach in passing orders and directions to save the Taj Mahal from further degradation. Chapter XI of the book recounts five Taj “assault” cases during 1993-2003. These show the complete callousness with which State officials have approached the vandalistic assaults on the monument. It was declared as a UNESCO World Heritage Site in 1983 for being “the jewel of Muslim art in India and one of the universally admired masterpieces of the world’s heritage” and hailed by Rabindranath Tagore as “the teardrop on the cheek of time”. Regarded as a symbol of India’s rich composite culture and history, it attracts at least seven to eight million visitors a year. The aesthetic features of the Taj seemed not to matter to the State and its officials who were more bothered about commercial tourism that they mindlessly sought to promote. The Court had to cancel both a concert and a hotel construction near the Taj. The apex court has done the job of protection of monuments that were statutory and administrative duties such as “closure of foundries using coal as fuel, relocation of shops, battery driven buses to the Taj, replacement of Uttar Pradesh police by the Central Industrial Security Force, and stopping of the construction of a police station by the UP police opposite to the Taj Mahal entrance”. Apart from the callousness of officials, the state of UP “contributed its own share towards legally allowing industries to pollute freely”.

But it was the Taj Corridor case that has received probably the largest attention in the book. It was for “the first time” that the Supreme Court became the complainant for registering an FIR through its Assistant Registrar (Public Interest). And the Taj Mahal was saved of a “fun city” at the “immediate rear… in the bed of River Yamuna”. Critics rarely pay attention to these developments of social action litigation: the Court, as well as counsel and amicus have played a heroic role in the unfolding saga of a threatened Taj. The Court could have done better to take “the entire documentary evidence” under its jurisdiction and kept a continuing vigil on the litigation in process as requested by the amicus. But, sadly, and mysteriously, it preferred not to. And so great was the “fascination” with the environmental route that in ordering prosecution under the Prevention of Corruption Act and the Water Pollution Act, the Court missed highlighting offences allegedly committed under “Sections 30, 31 and 32 of the Ancient Monuments Act… even though these sections make it a cognizable offence to imperil an ancient national heritage monument”.

The book also notes the waning of environmental protection approach developed in the first place (and some would say vigorously so) by the Supreme Court itself. Dr Mahajan finds a telling instance in a decision headed by Justice Ruma Pal to suo motu hive off the “disproportionate assets case… from her Taj Case bench”. But if the two were not integrally connected, was the Court justified in the first place to proceed with an entire Taj Heritage matter? Surely, Dr Mahajan is right to flag off this important concern: the Taj Heritage Project was integrally related with the Taj Mahal monument. One has to await autobiographies or biographies of the concerned Justices to fully understand the factors which animated such a fateful decision.

This work highlights the fundamental shift from the “mere monuments” approach to a right to culture approach for the protection of monuments. To this end, Dr Mahajan suggests an outline for a new law and some interim steps, which should command everyone’s attention. In sum, he proposes a restoration of a human right to culture as its basis, which as a first step would provide the “detailed documentation of the various monuments of various sections of citizens in terms of their history, geography, religion, livelihood, and the mores of that time”. These labours of oral historiography will also contribute to “remodelling” and reinvigorating the Archaeological Survey of India. The power and obligation to protect ancient monuments was in furtherance of human rights, freedoms and justice and if the old law does not meet the protection of fundamental democratic rights of the people to a culture of their own (must mean a greening of law), the time has come to amend the law or make an altogether new law.

Of course, the book has two wider messages: the first is that the practice of “unconstitutional economics” as State policy and the lack therefore of a database to implement Article 29 fundamental right which makes victimisation of monuments inevitable. And second, the judicial environmental approach of the Supreme Court which did not contribute to the fostering of consistency of environmental jurisprudence. Both these claims are weighty and deserve the dignity of theoretical reflection.

Michel Foucault, in a random observation, wondered how it came to pass that monuments of yesterday became documents of today! We now know what documents have meant to monuments. We need to re-explore the relationships between the two and find ways of recrafting institutional desires and designs towards the end of the first quarter of the 21st century.

Of Crony Capitalism and I...