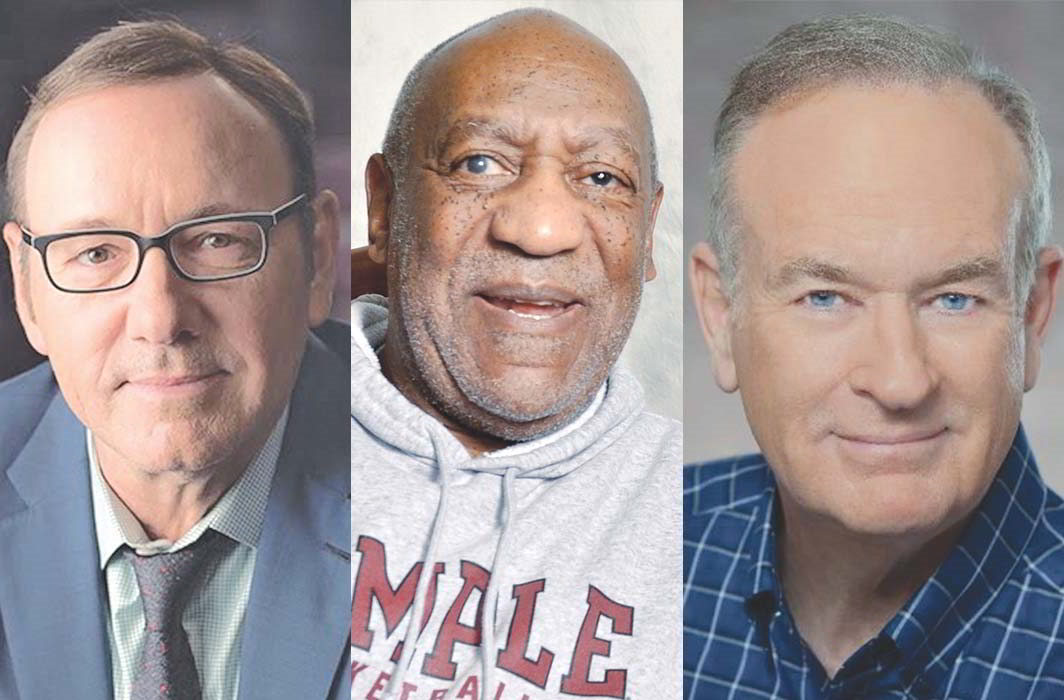 Above: While Kevin Spacey (far left) has admitted to being a paedophile, Bill Cosby (middle) reportedly assaulted over 16 women. Bill O’Reilly was fired from Fox News over a harassment scandal

In every nation there are different types of behaviour built into the social fabric, which are accepted as normal, until they are not. America is in the midst of such a moment where a certain reprehensible behaviour is no longer tolerated. Patriarchal assumptions about how women can be treated are hardly exclusive to the US.

In creative spheres—Hollywood and Bollywood, for example—harassment has been a longstanding issue. Recent events in Kerala have inspired a group called Women in Cinema Collective. The kidnapping and sexual assault of a well-known actress horrified Mollywood, the Malayalam film industry. She was brutalised but not humiliated. She fought back by going to the police and the public with the assault, even leading to the arrest of superstar Dileep for his invol­vement in the incident.

In the past year, a growing list of famous and nearly famous men in America have been pushed off their pedestals, lost jobs and prestige, even gone to jail because of accusations of sexual harassment and rape. That this has happened in a year when a self-proclaimed misogynist has been elected president is not an accident. The reasons for this attitudinal change vary but are not mutually exclusive. Call it climate change because the political climate and trust in powerful men have altered dramatically. This happens when laws change and people begin to understand that something once accepted as normal no longer seems normal.

When Hollywood producer Harvey Weinstein was “outed” as an abuser, his accusers were famous and influential women artistes whose public respect influenced the media and the people who read the stories.

In the past week, the career of actor Kevin Spacey collapsed like a house of cards following accusations that he harassed and assaulted young men on Hollywood sets and elsewhere. Netflix quickly cancelled his TV series House of Cards.  Spacey earned zero respect for claiming he was a paedophile because he was gay.

Another Hollywood name pushed into the limelight was actress Meryl Streep, who had spoken about a groping incident by Dustin Hoffman when she auditioned for a play he was directing. This claim first appeared in 1979, the same year both starred in Kramer vs Kramer, where they had a contentious relationship filming a story about a contentious marriage.

Remember that in 1977 when the American magazine Ms. featured a cover story about sexual harassment, the term was not defined in law and barely in use. Sensitivity on the subject grew slowly. In 1979, a legal argument was successfully made that sexual harassment was discrimination under Title VII of the Civil Rights Act of 1964. A Supreme Court ruling in a 1986 case enshrined this in US federal law.

This week, sociologist Michael Kimmel summed it up: “When you have Angelina Jolie and Gwyneth Paltrow in the same sentence, well, people take note.” Add Ashley Judd with comments from Jane Fonda pointing out that the complaints came from famous white women. Weinstein had seemed impervious to longstanding rumours about his behaviour with young and old actresses. Now he is in stupendous trouble that shows no signs of abating as various authorities consider criminal charges. 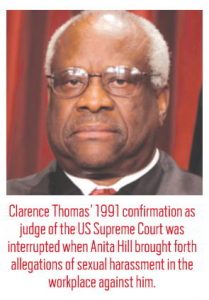 Voices keep joining in on social media. Courtney Love Cobain, an actress and singer, used Twitter to make a point about the powerful Creative Artists Agency (CAA). “Although I wasn’t one of his victims, I was eternally banned by CAA for speaking out against #HarveyWeinstein #rape.” Model Cameron Russell started a thread on her Instagram account on misconduct by men in fashion. More than 50 models anonymously shared their stories of harassment.

It isn’t just fame, it can be numbers. Recently, more than 16 women agreed to use their names and faces in an article about being assaulted by comedian Bill Cosby. The country took notice that perhaps the idealised Dr Heathcliff “Cliff” Huxtable that he played on his TV show wasn’t the real Cosby.

The harassment issue captured national attention in 1991 during the televised Senate Judiciary Committee hearings on the confirmation of Clarence Thomas as a Supreme Court judge. Anita Hill, then a college professor who was a legal clerk for Thomas, spoke about how he had sexually harassed her. The all-male and all-white Senate judiciary panel wasn’t happy about this. She was accused of bringing “sleaze” into the nomination process, portrayed as suffering from delusional fantasies and famously called by the pundit David Brock “a little bit nutty and a little bit slutty”. Thomas was confirmed and has gone on to spend a completely undistinguished career at the high court.

Fame and fortune clearly underpinned Fox News host Bill O’Reilly’s willingness to treat women badly. He settled his most recent lawsuit with a $32-million payment. Within months, he got a new contract with Fox for $100 million, but was fired when all of this became public. He followed his boss Roger Ailes into exile. Ailes has since died. O’Reilly still writes thin historical novels but is not on TV.

President Donald Trump’s supporters elected him regardless of questionable behaviour. Perhaps they voted for him because of this behaviour. What we can safely conclude is that behaviour, where someone is harassed, isn’t going away, but may be in remission in America because of what has happened in the past year.