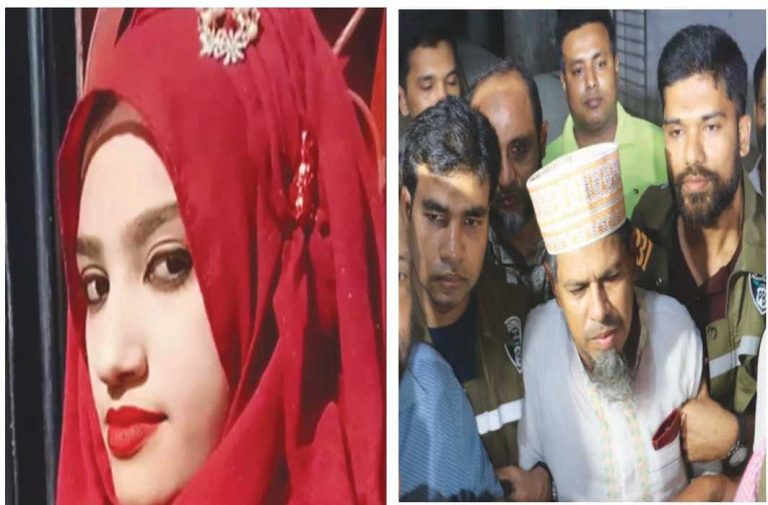 In a shocking case, a madrassa principal and 15 others were sentenced to death by a tribunal for killing a woman who resisted sexual harassment

Bangladesh, like any other South Asian country, witnesses large-scale sexual abuse. But a murder on April 6 sent shockwaves throughout the country. It involved the murder of a madrassa student, Nusrat Jahan Rafi, 19, in Feni, a Bangladesh town close to Tripura. But in a landmark decision, the judge of the Women & Children Repression Prevention Tribunal, Mamunur Rashid, handed the death sentence to 16 of the accused, including the madrassa principal who was sacked, two teachers and 11 students and two expelled members of the Awami League party who were members of the governing body of the madrassa. The judge remarked: “Her (Nusrat) courage against injustice is laudable. The bold sacrifice of Nusrat for preserving the dignity of womanhood has already given her immortality. And her inspiration would last forever.”

The trial was completed in a record 62 days, thanks to the prompt action taken by the judge of the Tribunal. The case was lodged with Noakhali’s Sonagazi police station in April and the police team completed its investigation and submitted the charge sheet to the court on May 29. This was accepted by the court on June 10. The prosecution team completed the deposition of 87 witnesses out of a total of 92 by September 9 and the verdict was announced on October 24. “The entire prosecution team very efficiently completed the ground preparations and the case was completed in record time. It’s a unique case as the complicated trials were completed in 62 days,” Law Minister Anisul Haq reportedly said.

The accused included madrassa teachers Abdul Kader and Afasar Uddin and 13 students. Two women were also accused in the case. Under the orders of the principal, they took the victim to the rooftop of the madrassa, tied her up and set her on fire. This is a rare instance of a court ordering the death penalty for 16 people in just one case. The judge said that the accused deserved exemplary punishment. He also fined each one lakh taka.

The verdict of the lower court has come up for reference in the High Court as a routine procedure. The High Court will hear appeals, if any, against the accused. National Human Rights Commission chairperson Nasima Begum demanded early implementation of the verdict and said this exemplary judgment would serve as a deterrent for those who commit crimes against women.

Sub Nandy Das, a lawyer and an activist, told India Legal: “The death sentences awarded by the lower court were delivered after getting evidence against all the accused. But the fact that in one single case 16 people were sentenced to death shows how heinous the crime was. The High Court will have to examine various aspects relating to the case. A large number of students, including two girls, were also sentenced.”

The accused principal, Siraj Ud Doula, had given the order to kill Nusrat. He was also charged with sexually harassing her on March 27, 2019. She reported it to the police and an FIR against Siraj was filed and he was arrested. Following this, his cohorts threatened her family members and asked them to withdraw the case. But they didn’t give in.

On April 6, when Nusrat went to the madrassa to write an exam, she was forcibly set on fire on the rooftop by four veiled persons after they asked her to withdraw the case. They tied her with a scarf, poured kerosene on her and set her on fire. She died of severe burns four days later.

The perpetrators wanted to make it look like suicide. But their plan failed as a severely burnt Nusrat was rescued and taken to hospital. After she was taken there, Mozzazem, the SHO of Sonagazi Model Police Station, near the madrassa, spoke to her on the mobile and recorded her statement without her consent. He later circulated the statement on social media. The Tribunal reprimanded Mozzazem for his act and also passed strictures against the Superintendent of Police, Feni, Jahangir Alam Sarkar.

Nusrat’s father, AK Musa, who relentlessly fought the legal battle along with wife Shirin Akhter and son Mahmudul Hussain, was all praise for Prime Minister Sheikh Hasina Wajed for helping them get justice despite two of her partymen being involved in the case. Nusrat’s mother was satisfied with the verdict and said the trial would be a landmark in Bangladesh’s legal history and was an example of how a determined system could work efficiently and get redressal. Attorney General Mahbubey Alam described the judgment as a milestone.

According to a survey conducted by Action Aid, 80 percent of women workers in Bangladesh have seen or witnessed sexual violence. In the first six months of 2019, 26 women were killed after being sexually assaulted, 592 were allegedly raped and 113 gang raped. Nusrat, even in her dying declaration, stood her ground. But most cases of sexual assault, abuse and exploitation go unreported, said Sumiya Aziz, a lawyer.

According to a 2013 United Nations study on men and violence, less than five percent of rape perpetrators in Bangladesh face any legal consequence for their actions. But then, only a fraction of rapes are reported in the first place. The same study states that 89.2 percent of urban Bangladeshi men who were surveyed agreed or strongly agreed with the survey finding. If a woman does not physically fight back, it is not rape, according to them.

A report published in July by the Bangladesh Mahila Parishad estimated that 731 women and children were raped in the first six months of 2019 as compared to 942 in 2018. But the numbers are likely to be higher as most victims fear ostracisation by their families.

Shockingly, a report by the Bangladesh Shishu Adhikar Forum, a Dhaka-based child rights organisation, said that at least 496 children were raped in Bangladesh during the first six months of 2019. And in this ultra-conservative country, madrassa heads have often perpetrated these crimes.

Activists have said that while there are strict laws in Bangladesh, there is little implementation. Nusrat, in her dying declaration, had said that she would fight against the injustice done to her. She will remain an inspiration in Bangladesh.