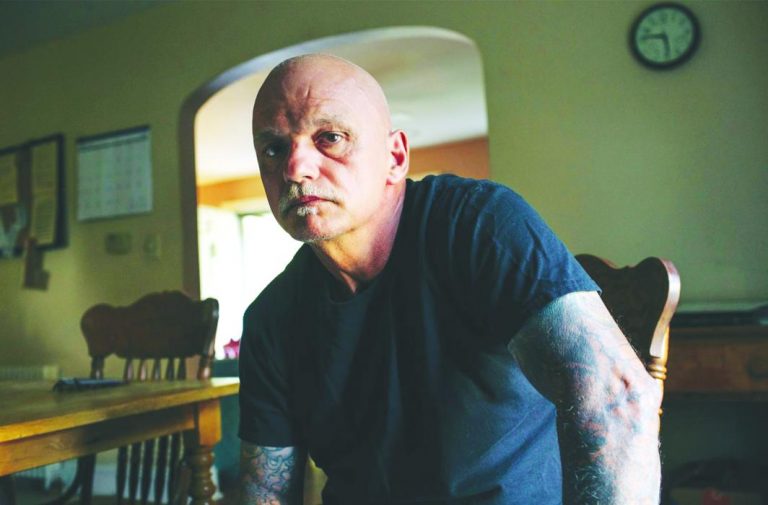 Above: After James Thompson was cleared by DNA evidence, he accepted an Alford plea to be released from prison/Photo: Lexey Swall/ProPublica

Inmates are sometimes offered freedom in exchange for pleading guilty to a crime they probably didn’t commit. It’s a bad deal

After Fred Steese spent two decades in a Nevada prison for murder, evidence indicating that he was innocent was found buried in the prosecution’s files. It was proof that Steese, as he’d always claimed, had been hundreds of miles away on the likely day of the murder and couldn’t have been the killer.

In Maryland two years earlier, the conviction of James Thompson, who had also served 20 years for murder and rape and whose case involved police and prosecutorial misconduct, was thrown into overwhelming doubt when his DNA didn’t match the semen found in the victim.

In neither case did prosecutors jump to set the prisoner free. Instead they vowed to retry the men unless they agreed to a plea bargain called an Alford plea, in which the defendant enters a guilty plea while also asserting his innocence for the record. The deal allows the inmate to leave prison rightaway. But he remains convicted of the crime, forever a felon.

Another strategy prosecutors employ is to offer to convert an inmate’s sentence to time served, with his conviction intact. Freedom in both instances is dangled as a carrot to entice the defendant to give up on exoneration.

These situations play out with numbing consistency around the country. The deals defy justice. So it was a righting of the scales when last November Steese, whom I wrote about for ProPublica, was pardoned by Nevada after I highlighted his case in Vanity Fair.

Desperate appeals from inmates and their families arrive in my voicemail and email almost every day. I can’t say whether those who contact me are innocent, but I do know that without the public spotlight a reporter can provide, or the attention of defence lawyers, their claims probably won’t get a second glance. Advocacy groups such as the American Civil Liberties Union and the Innocence Project are flooded with far more requests than they can reasonably take on. Wrongful convictions are so widespread that writing about cases one by one feels like using a butter knife to break up an iceberg.

No one appears to have tracked how often prosecutors use Alford pleas in cases where exculpatory evidence has surfaced that provides inmates with powerful ammunition to contest their guilt.

Still, it seems everywhere I go I hear about another Alford plea. Recently, it was Leroy Harris, who had spent almost 30 years in jail on a rape conviction that came into question because of DNA testing and revelations of serious prosecutorial misconduct in Connecticut.

Prosecutors I’ve spoken to contend they seek Alford pleas because they are convinced the inmates are guilty. Often they say that the plea is the best way to ensure a guilty man remains convicted because effectively prosecuting a new trial may be too difficult for a variety of reasons, including that evidence had been destroyed or simply too much time had passed. The subtext is that the prosecutors may no longer be able to prove guilt beyond a reasonable doubt.

In the interest of justice, prosecutors should have acknowledged that they couldn’t meet their burden of proof and cleared those inmates. Instead, they were offered Alford pleas.

There’s an inherent conflict of interest at play for prosecutors because the same office that might have wrongfully convicted the defendant in the first place is in charge of deciding the innocence claim. States could overcome this hurdle by setting up independent commissions or conviction integrity units to investigate and decide the outcomes.

Alford pleas are also endorsed by judges, who have to sign off on them. Legal experts told me that if a judge doesn’t accept the deal, he’d be standing in the way of freedom for an innocent man. But some experts have suggested that, at the very least, a judge should directly ask a prosecutor in open court whether he is upholding his duty to the truth by offering an Alford plea.

The misuse of Alford pleas is not a partisan issue. These deals happen in blue and red states, with liberal district attorneys and conservative ones. In my reporting, there has often been a common denominator: official misconduct.

In Alabama two years ago, for example, prosecutors were trying to keep Montez Spradley on death row until his lawyers uncovered multiple constitutional violations—including that the state had not disclosed payment to a key witness. Prosecutors eventually agreed to let Spradley go, though they insisted on an Alford plea, which ensured there was no further investigation into their conduct.

What’s striking about these cases is that the real culprit in the crime is often forgotten. With the Alford plea, the police and prosecutors consider the case closed because the defendant, after all, has entered a guilty plea. In the cases of Alford pleas involving murders, the authorities, whose very job it is to keep a community safe, are effectively shrugging at a killer on the loose.

The pleas have another bonus built in for prosecutors: The law in most jurisdictions bars defendants from bringing civil lawsuits if they pleaded guilty. People like Thompson can be robbed of legal recourse. And try getting a job if you have a murder conviction on your record.

Thompson remains a convicted murderer, despite his release. But his co-defendant, James Owens, refused an Alford deal and remained in prison while he sought a new trial. On his first day in court, prosecutors dismissed the case. He is now suing the detectives who investigated his case…

For those who accepted Alford pleas, a pardon is their only possible path to justice, and that’s a long shot in most states. Often pardons are held hostage by the political system, in the hands of leaders loath to be tagged “soft on crime”. The only person on the Nevada pardon board who voted against Steese’s pardon was the attorney general, who is running for governor.