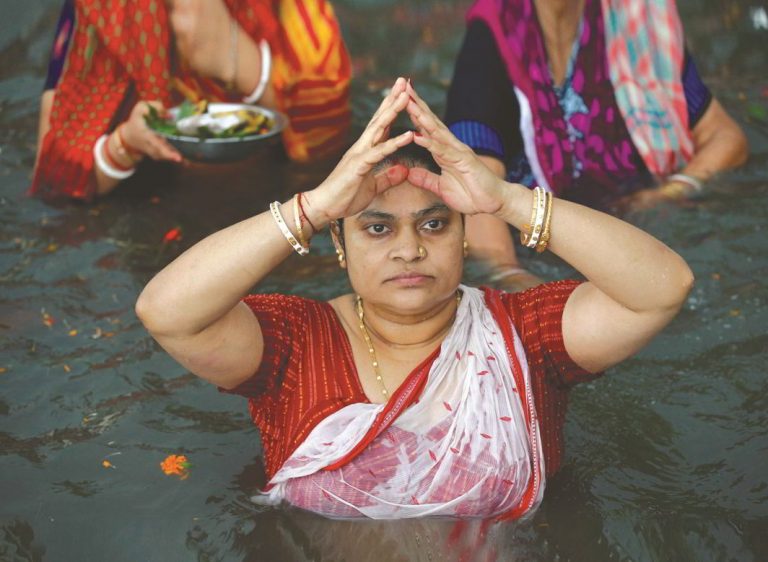 Above: A Hindu woman takes a Mahashtami dip in the Brahmaputra. Bangladeshi Hindus share roots and customs with their Indian counterparts. Photo: UNI

Though secularism and equality are enshrined in the country’s constitution, women of this minority community face negative discrimination in inheritance, marriage and divorce

Despite the exodus of Hindus from Bangladesh following Partition, a large proportion of them still live in this country. While wealthy Hindus who migrated, mostly to Assam, West Bengal and Tripura, lost their land and assets, poor and middle-class Hindus who were left behind became targets of discrimination. And this continues even today.

The last Census in 2011 showed that Hindus comprised 8.96 percent of the population in Bangladesh. The total population currently is 16 crores. And according to a study by Pew Research Center, Hindus will constitute seven percent of the population of Bangladesh by 2050, while Muslims will form 92 percent. Interestingly, after India and Nepal, it is Bangladesh that has a large number of Hindus. Culturally, Bangladeshi Hindus are similar to their ilk in West Bengal, Assam and Tripura and follow the same customs.

Dr Abul Barkat of Dhaka University told India Legal: “Through a combination of mass exodus and genocide during the 1971 war, there was a loss of around 20 million Bangladeshi Hindus. This was one of the largest displacements of population based on ethnic or religious identity in recent history. Most of the Hindu-owned businesses were permanently destroyed.”

Though secularism and equality of all citizens has been enshrined in the Bangladeshi constitution, there isn’t much evidence of it. The issues irking Hindus relate to women’s rights, dowry, poverty and unemployment. Bangladesh has a secular legal system except in matters relating to inheritance, marriage and divorce, where there is no single law. While Muslims and Christians can divorce according to their own laws, there is no right to divorce for Hindus, especially women. Hindu women face legal difficulties and various types of gender-based discrimination. They cannot divorce and remarriage is impossible. Strangely, a Hindu man can marry again without any legal difficulties.

Dr Meghna Guhathakurta, a member of the Bangladesh Human Rights Commission, said: “Our research through random sampling in seven divisions of Bangladesh divided equally between the urban and rural areas found that more than 52 percent of women were victims of torture. Without a Marriage Registration Act, they cannot seek legal redressal. A majority of them want this Act and legalising of Hindu divorces. This would bring them a lot of relief.”

Lawyer Nina Goswami said: “At present, when a Hindu man walks out on a marriage, the wife cannot sue him for alimony or maintenance. Lack of marriage papers makes it almost impossible to prove that they were married.” Many Hindu men also keep multiple wives knowing that they cannot be prosecuted, she added. Many have also dumped their wives, leading them to take up unwanted jobs and lead penury-stricken lives. However, the government, she said, is not keen on angering Hindu men, who generally vote for the ruling Awami League. “Unfortunately, these women don’t exist for the government. For our politicians, the Hindu community is a big vote-bank made up of only males.”

However, the government rejected such criticism and said it was hamstrung by hardline Hindu activists who oppose changes in the law. The Hindus are considered educated and enlightened, but hardliners have opposed even marriage registration. 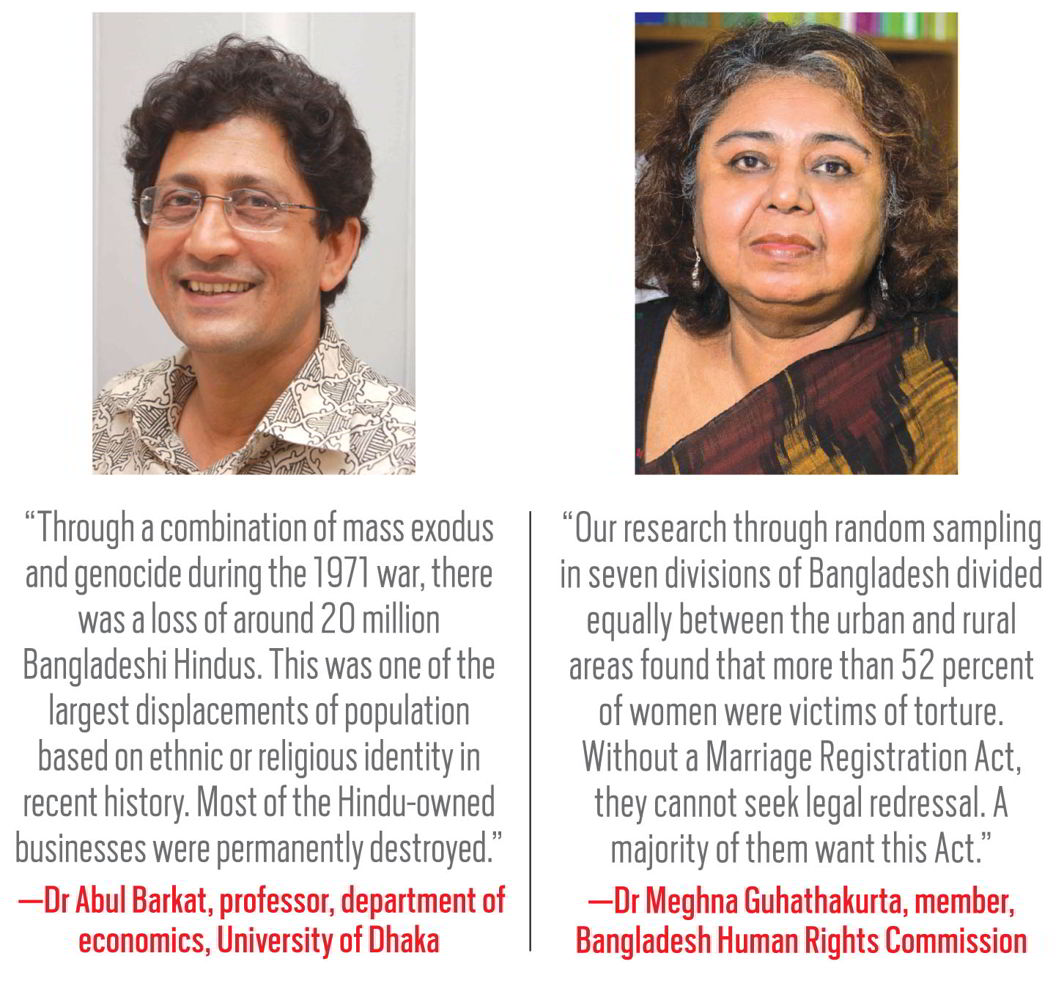 This lack of rights for Hindu women in Bangladesh was recorded by the US government’s International Religious Freedom Report (IRFR) for 2016. It examined marriage laws governing religious groups in various countries and said that polygamy is permitted for Hindu men in Bangladesh. “Under Hindu (civil) law, men may have multiple wives, but there are officially no options for divorce,” the report said. “Buddhists are covered under Hindu law and divorced Hindus and Buddhists may not legally remarry.” Hindu women are also prohibited from inheriting property under their civil laws, the report said.

According to Sara Hussain, a leading lawyer, the draft civil code by the Bangladesh Mahila Parishad should be taken as the basis for judicial reforms. This code has suggested new laws for Hindu women. 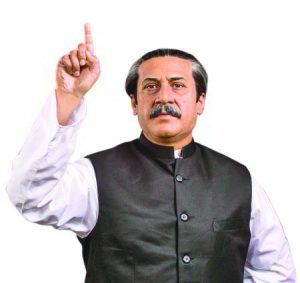 Sheikh Mujibur Rahman, in his first speech to the nation after his return to liberated Bangladesh in 1972 from Pakistan, recognised the disproportionate suffering of the Hindu population during the Bangladesh Liberation War. On a visit to Kolkata in 1972, Mujib visited refugee camps that were still hosting several million Bangladeshi Hindus and appealed to them to return to his country and help in rebuilding it.

Despite the public commitment of Mujib and his government to establishing secularism and the rights of non-Muslims, two aspects of his rule remain controversial as they relate to the conditions of Hindus in Bangladesh.

The first was his refusal to return Ramna Kali Mandir, historically the most important temple in Dhaka, to the religious body that owned it. This centuries-old temple was demolished by the Pakistani army during the Bangladesh Liberation War and around 100 devotees were murdered. Under the provisions of the Enemy Property Act, it was determined that ownership of the property could not be established as there were no surviving members to claim inherited rights, and the land was handed over to Dhaka Club, a club of the elite.

Second, state-authorised confiscation of Hindu-owned property under the provisions of the Enemy Property Act was rampant during Mujib’s rule. His Awami League was the largest beneficiary of Hindu property transfer. With almost eight million displaced Hindus and more than 2,00,000 Hindu victims of genocide, it was difficult to establish direct ownership of property within legally specified time-frames. This caused much bitterness among Bangladeshi Hindus, given the public stance of the regime’s commitment to secularism and communal harmony.

Largely because of these and other factors, the Hindu population of Bangladesh started to decline through migration.

Unlike Bangladesh, in Pakistan, the Sindh Provincial Assembly passed a law for registration of marriages for Hindus there “as long as both parties are 18 or older, give consent to the marriage, and are not within a degree of familial relationship prohibited by Hindu custom”.

Hussain said: “It’s painful to see that while other SAARC countries, including Pakistan, have taken up the issue of the civil code and even passed the Hindu Marriage Bill 2017, Bangladesh has lagged behind. Former Pakistani Prime Minister Nawaz Sharif had said it is a consolidated law for solemnisation of marriages by Hindu families residing in Pakistan. They are as patriotic as any other community and it is the responsibility of the state to provide equal protection to them, a statement from his office had said. Our prime minister, Sheikh Hasina, should also think like Sharif and give Bangladesh’s Hindu women a law that would protect them.”

Time will tell if there has been a change in this regard.