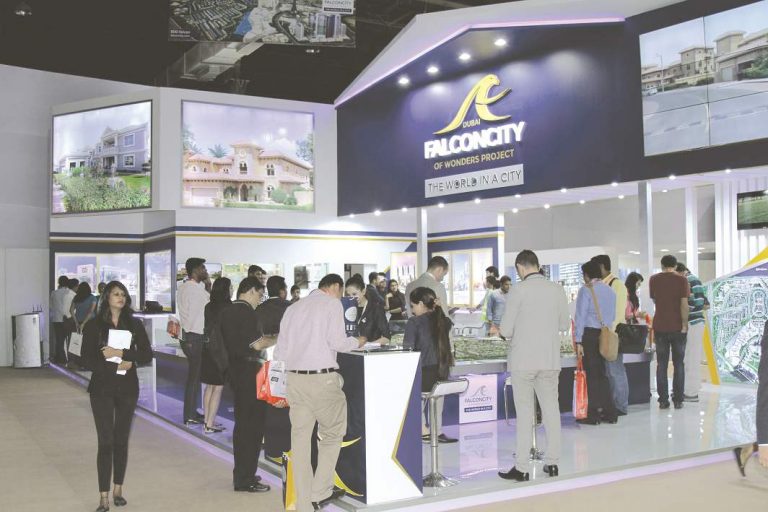 Above: Exhibitors at the third edition of the Dubai Property Show in Mumbai/Photo Courtesy: Magicbricks

Investing in property in the UAE is becoming increasingly attractive for Indians. For one, it’s a sound investment in arguably the most advanced city state (Dubai/­Abu Dhabi) in the world and for another, the standard of construction is cutting-edge, so you get your money’s worth.

Indian laws allow for residents to hold property abroad in conjunction with an NRI so long as funds are not funnelled out of India. All you have to be is related by blood to that NRI. One of the ways to navigate this law is to fly down to Dubai, become a resident and then stand in as the relative of choice and presto, you have a house in your name. So long as you do not spend more than 180 days at a stretch outside the country, your visa retains its validity. On a good tailwind day, a flight from Delhi or Mumbai is under three hours, so it is not a very difficult chore to visit the UAE twice a year.

Payment can be done by proxy or in a nice little arrangement India-side where cold cash is exchanged at a premium and it is a win-win situation for all sides. The NRI here can pay by cheque and abide by all the local laws, though that is no longer so simple a transaction.

Putting money in immoveable property has always been one way of staying a step ahead of the home nation’s taxman. The UK and the US were once favoured areas. But the Gulf, especially the UAE, is now streets ahead as the perfect choice for Indians, what with there being a large segment of the population from the home country and the requisite “desi” cultural and social infrastructure to back it and literally make it a home away from home.

Rather than face uncomfortable enquiries from Indian authorities over unexplained wealth, Indians have found that transforming homes into palatial houses not only enhances their self-esteem but also insures them against any fiscal exercises like demonetisation where warehoused currency turns instantly into scrap paper.

Investors look to Dubai, for example, where the property boom is unabated because of three major factors. The standard of living is about the highest in the world and the lifestyle par excellence. Then, there is a very stringent level of security, with crime about the lowest in terms of act per population and personal safety is nearly absolute. There is no property tax and no post-purchase costs to be paid to the government.

This trinity of factors and the massive range of options in opulence make a purchase more than just worthwhile. The workmanship and the quality of materials used are above reproach and the commitment from builders closely monitored by authorities. Maintenance is of the essence and these factors all combine to make it attractive to fund a property, be it an apartment, a beachfront villa or a designed bespoke mansion in upscale communities like Emirates Hills.

This desire to own a home in the UAE is also fuelled by the relatively high price of property in India’s urban enclaves, as well as the risk of scrutiny by the Enforcement Directorate over where the funding has come from. Distance may not make the heart grow fonder but it does generate some myopia over the where and how of the funding. Just last year, the Dubai Land Department reported that Indians buy over a quarter of all property sold and in 2016, had invested over $3 billion in the Emi­rate.

With more Indians being bitten by the travel bug and Dubai being on top of their holiday list, the idea of investing in a house or even a farm is a swift priority while there. A very pro-active service provider contingent is ever ready with choices to suit all pockets. As a married couple is legally allowed to remit half a million dollars from India and an individual half that, the availability of superb housing in the price range makes it irresistible as a bargain. There is an added attraction that if the property is sold one day, that money is legal tender.

The UAE government has very stringent and demanding laws and safeguards to ensure that no money from narcotic or terrorism activities finds its way into the system. Even the most tenuous of links eliminates such elements.

Much of the UAE’s incredible progress has excited envy in other parts of the world and to combat arbitrary judgements of its intent, the country has upped its transparency with regard to fiscal matters and sharing of data. For example, even as the very wealthy en­gage in hiding their unexplained liquidity from January 1, 2018, the UAE will share information about bank accounts with Indian authorities. Banks in the country have already tightened their laws and demand tax ID from Indians wanting to open accounts. They have also increased their due diligence on individuals, including asking for the names of other shareholders in their companies if they so represent such entities. This is to ensure that the money is not tainted. Also that it is legitimate. In Narendra Modi’s war against stashed wealth, this upgraded level of co-operation will indicate to Indian authorities if these individuals are any bagmen for politicians and business individuals and laundering activities through fronts. The ED will then be in a position to ask how the money was earned.

The other very pleasant safeguard is that the property sector is highly regulated and even common landlord-tenant disputes are now dealt with expeditiously. The Real Estate Regulatory Agency (RERA) has activated definitive laws to reduce and resolve issues and no clearances or even hiring of domestic help is now possible without an Ejari certificate. This is an online portal from RERA. While this might cause some consternation in those under the cosh and those who have broken many a law in India, for those whose dealings have been above board, there is no cause for concern. In fact, it is a great deal…where else do you have a fully functional Ministry of Happiness as part of the government?