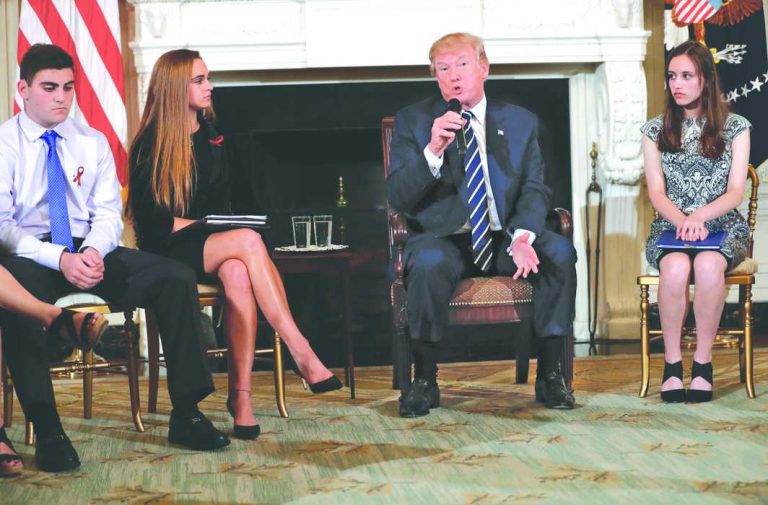 Above: US President Donald Trump with students of the Parkland school at the White House/Photo: UNI

It’s predictable after every new mass-shooting horror: The political right’s reflexive call for “thoughts and prayers,” which is then mocked by people who favour more gun restrictions for lacking any accompanying ideas for preventing future killings. But there’s an equally predictable refrain on the center-left and in the media, too: “Once again, nothing will be done.”

Barely had the death toll of 17 been announced… after the shooting at a high school in Parkland, Florida than The Washington Post declared, “The gun debate is going nowhere quickly after Parkland.” CNN offered: “Amid continued string of mass shootings, gun control going nowhere in Congress.” After 59 concert-goers were mowed down in October, former Democratic congressman Steve Israel put to rest any hope for reform in a New York Times op-ed column titled, “Nothing Will Change After the Las Vegas Shooting.”

This fatalism is borne of hard-won experience. Congress has failed repeatedly to pass any gun-control measures after past calamities, even the 2012 massacre of 20 first-graders and six teachers at Sandy Hook Elementary School in Newtown, Connecticut.

Yet this world-weary defeatism is self-fulfilling in its own way, and helps explain why Washington hasn’t taken action to address the killing.

For one thing, such pessimism demoralises, and dismisses, those who are motivated to fight against gun violence, such as the network of angry moms that sprung up after the Sandy Hook massacre and the organisation led by former Arizona congresswoman Gabby Gifford’s, which have managed to achieve a series of state-level successes even as reform stalls at the national level.

For another thing, it lets off the hook those who are opposed to stronger gun laws. Declaring preemptively that any new effort at gun-law reform is doomed spares opponents from even having to make their arguments for protecting the gun lobby.

Most importantly, liberal fatalism on gun control overstates the strength of the opposition. The National Rifle Association’s (NRA) influence depends heavily on the perception of its power. By building up the gun lobby as an indomitable force, pessimists are playing directly into its hands.

No doubt, the NRA is influential. Not so much because of the campaign contributions it makes to candidates, but because it can count on an energised grassroots base of gun-rights supporters to turn out at the polls and badger elected officials with calls and emails. But that influence has limits, and there are plenty of reasons to believe that it is on the wane.

For one thing, the proportion of Americans with guns has been steadily declining to its lowest level in decades, though there are recent signs that the decline has levelled off. (The reason why the number of guns continues to rise despite this demographic trend is that the remaining gun owners are buying more and more weapons.) Meanwhile, gun ownership is growing more heavily clustered in certain states. That limits the voting power of the gun lobby.

For another thing, the aforementioned notorious failure, to pass background checks following the Sandy Hook massacre, was a closer call than many people realised. It got 55 Senate votes, just five short of a filibuster-proof 60. Six senators with A ratings from the NRA voted for it. It would still have had to get through the GOP-controlled House, but that was not out of the question: there would have been tremendous pressure from Sandy Hook families on then-Speaker John Boehner to hold a vote, and unlike in the Senate, it would have required only a majority, which meant getting fewer than 20 Republi-cans to vote for it.

And consider what happened after that vote. Two of the four red-state Democrats who voted no, Arkansas’ Mark Pryor and Alaska’s Mark Begich, got zero NRA back-up in return for that vote and lost re-election in 2014, proving to other centrist Democrats that there’s no point in currying NRA favour. It’s hard to tell now, with Republicans in control of Washington, but the NRA’s decision to become a purely partisan organisation, after years of courting Democrats as well, could come back to haunt it in the near future.

Meanwhile, one of the purple-state Republicans who voted no, New Hampshire’s Kelly Ayotte, lost in 2016 in a race in which the pro-gun-law groups went after her hard for that vote.  No longer is voting with the NRA the obvious safe tack for a self-interested politician…

Meanwhile, the empirical case for reducing gun violence through tougher restrictions has been growing stronger, providing counter to the oft-heard claims that “laws wouldn’t make a difference anyway”. Missouri has seen a sharp rise in shooting deaths after eliminating in-person background checks for gun purchases. Connecticut, on the other hand, has seen a sharp decline in shooting deaths after it instituted stringent gun-permitting requirements following Sandy Hook.

Of course, with Republicans now in control of Congress and the White House, the odds are stacked against federal legislation. But that’s the case with plenty other issues that liberals still see reason to keep pushing forward on at all levels of government, from healthcare to climate change to the minimum wage, even if momentary prospects are not bright. Bottomline, the widespread fatalism on guns is self-fulfilling. It inflates the power of the opposition, undermines activists, and gives off the air of defeat, never a good thing in a country that prizes winners.

But now a new generation may be showing a different way. A remarkable wave of student outrage and activism is spreading from Parkland, serving as a rebuke not only to conservatives who have blocked gun-law reform, but also to liberals who had given up the fight.

“When we’ve had our say with the government—and maybe the adults have gotten used to saying ‘it is what it is,’ but if us students have learned anything, it’s that if you don’t study, you will fail,” declared Emma Gonzalez, a Park-land student, in a speech that has gone viral on the Internet. “And in this case if you actively do nothing, people continually end up dead, so it’s time to start doing something.” Such youthful determination will run up against plenty of hard realities. But in this she is right: The worst odds of all lie in declaring any effort hopeless.