Maldives is cosying up to Beijing which has pumped in money for infrastructure projects. Unless India has something better to offer, China is there to stay

China has been steadily ramping up its presence in India’s neighbourhood. The latest is the Free Trade Agreement between it and the Maldives. This comes even as concern grows in Delhi over China’s predatory moves in the Indian Ocean region. However, this should not have come as a surprise as the negotiations have been on for at least two years or more. It was rushed through in a brief session of parliament ahead of Maldivian President Abdullah Yameen’s visit to China. The unseemly haste in getting the deal endorsed, with no opposition members present, has naturally angered the opposition.

“A Free Trade Agreement between Maldives and China will be detrimental to our economy as the balance of trade is greatly in favour of China. The agreement must be in the best interests of the people of the Maldives,” said former president Mohammed Nasheed and leader of the Maldivian Democratic Party (MDP) in a statement. The opposition claims that the agreement was approved by just 30 votes in the 85-member house and was not legal. “The MDP notes that the attorney general of the Maldives had advised corresponding legislation for the Agreement to be legally binding. The constitution requires 43 attending to pass legislation on this and the government does not have the required votes. The FTA cannot be implemented until the legislation is passed,” the MDP said. The party noted that according to the constitution “voting on any matter requiring compliance by citizens shall only be undertaken when more than half of the total membership of the People’s Majlis is present at the sitting at which the matter is voted upon.”

But Yameen, who is scheduled to be in China later this month, possibly wished to arm himself with this big-ticket item before meeting President Xi Jinping in Beijing. Xi was the first Chinese president to visit Maldives in 2014. It was during his visit that the Maldives decided to join China’s Maritime Silk Route.

Former Indian foreign secretary Lalit Mansingh said that the Maldivian opposition had every right to question the FTA. “A trade agreement which is transparent and benefits both countries is naturally acceptable to all. But one that is imposed on the country in a clandestine manner cannot be pushed through in a democracy.” He went on to add that President Yameen’s authoritarian streak was distorting democracy in the island state. He added: “India has always defended democracy in the Maldives. We sent in our forces when President Gayoom was nearly overthrown in a coup in 1988 and have sided with democratic forces in the island nation.”

Yameen has been riding roughshod over the opposition, jailing leaders and putting scores of activists in jail on flimsy charges. President Nasheed is in exile. With Commonwealth countries and the rest of the international community criticising Yameen for his undemocratic practices, the Maldivian leader is turning more and more to China for support. Beijing can provide not just political support but pour in funds for infrastructure projects badly needed in the island state. Beijing, as a rule, stays away from the domestic politics of a country, concentrating instead on the leader and cheque book diplomacy.

As the Maldives gets cosy with China, India, which in the past had a large toehold in the Indian Ocean state ruled by President Abdul Gayoom, is gradually being sidelined. The modernisation of Male airport which was earlier allotted to GMR, an Indian infrastructure conglomerate, by Nasheed was handed over to a Chinese company by Yameen. GMR Male International Airport Limited (GMIAL) took the case to an international arbitral tribunal, which ordered that GMIAL be paid $270 million in compensation. This was paid possibly by the Chinese. Also of concern to India is China’s presence on the Maldives’ northern atoll which sits on the busy transit route between Southeast Asia and the Middle East. According to Nasheed, 70 percent of his country’s foreign debt is owed to China, on which the loan interest alone “is more than 20 percent of Maldives”, according to The Diplomat.

In March 2015, Prime Minister Narendra Modi called off a scheduled visit to the island state following the arrest and detention of Nasheed on charges of terrorism. Protests erupted on the streets of Male and the visit was cancelled. The larger message was Delhi’s unhappiness over the strong-arm tactics of the government. Modi visited Seychelles, Mauritius and Sri Lanka to strengthen ties with island nations with an eye on China’s growing presence in the Indian Ocean region, long considered Delhi’s periphery.

In July 2015, soon after Modi’s snub to Yameen, the Maldives brought in new legislation by which foreigners investing more a billion dollars in the island economy could own land in perpetuity in the Maldives. The only rider—provided 70 percent of the land was reclaimed from the sea. China, which has mastered the art of churning ocean beds to fortify craggy islands in the South China Sea, can turn this into a huge advantage. The move triggered concern over land grab by China and was particularly worrisome for India. There are fears of Beijing establishing a permanent naval presence in the Indian Ocean island in future.

The Maldives is part of President Xi’s ambitious plan to revive the ancient Maritime Silk Route. This connected China to Southeast Asia, the Indonesian archipelago, the Indian subcontinent and the Arabian peninsula to Egypt and Europe in ancient times. On the ground, this means that China needs to have excellent political and economic relations with India, Pakistan, Sri Lanka, the Maldives and Bangladesh. Barring India, China has been able to forge ahead in bolstering relations with the rest of the sub-continental nations.

India is concerned about Chinese military expansionism in the guise of maritime trade and connectivity in the Indian Ocean region. New Delhi was the only major nation to have boycotted Xi’s jamboree on the One Road One Belt initiative in May 2017. India is concerned at the prospect of being surrounded by Chinese naval presence across the littoral island states in its neighbourhood. Mansingh describes China’s wooing of the Maldives as an “attempt to get another pearl in the string against India”. He is referring to China’s alleged attempts to encircle India with footprints in Sri Lanka and the Maldives.

The problem with the Chinese maritime and land initiative is that most countries, whether Pakistan, Sri Lanka, the Maldives or even Bangladesh, find it hard to resist the hard cash that China puts on the table. In befriending Yameen, China has again let money do the talking. Apart from modernising and running Male international airport for 25 years, it is also building a friendship bridge to connect the airport with Male. 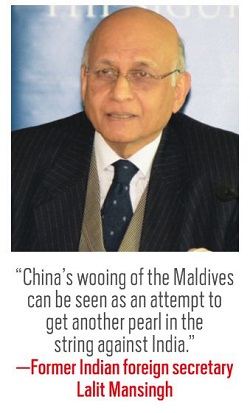 The Maldives, which relies heavily on tourism, is now getting planeloads of high-spending Chinese tourists. In the first nine months of this year, nearly 2.4 lakh Chinese visitors holidayed in the island state. The FTA with China would further boost economic ties and bring tangible benefits to the Maldives. But there are concerns about the strings that China attaches to the loans that it extends to countries vying for its infrastructure funds.

This brings into question Prime Minister Modi’s policy of neighbourhood first, something he vowed to do when he first came to power. But whether it is the Maldives, Nepal or Sri Lanka, not to talk of Pakistan, it is the Chinese who have made tremendous progress in the last three years.

India may be fretting about China’s inroads and its attempts to chip away at Indian influence in the region, but unless New Delhi has something better to offer, China is here to stay.

So far, Modi has no big alternative idea to match either the One Road One Belt initiative or the Maritime Silk Route project of President Xi.