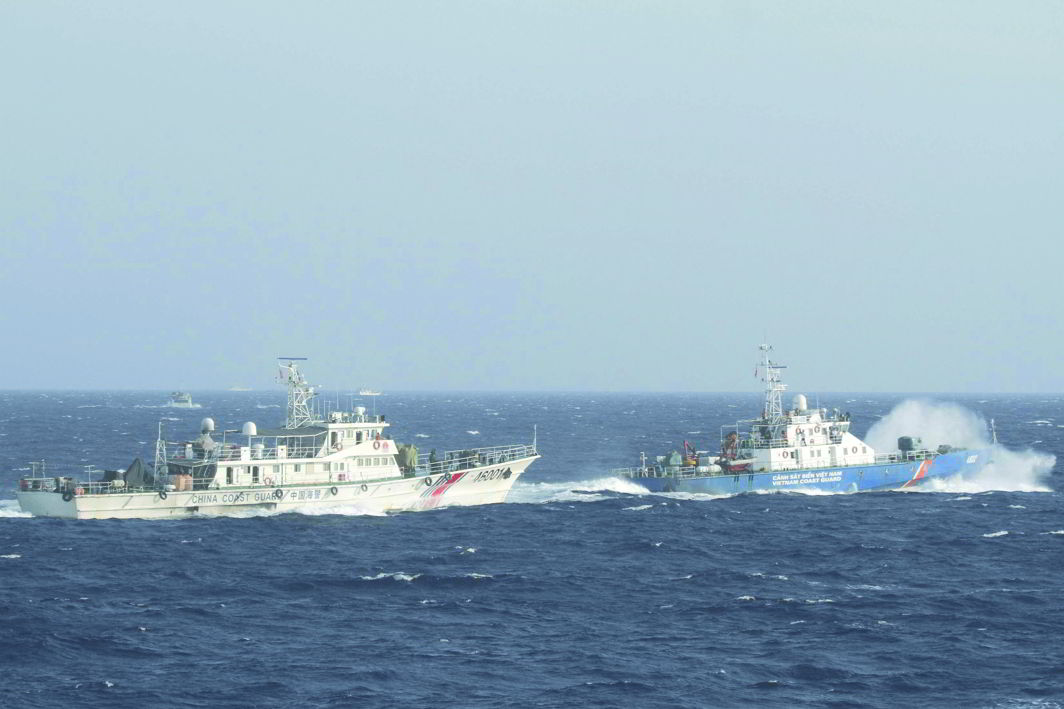 Above: A marine guard ship from Vietnam (right in the picture) near a Chinese ship in the South China Sea. Photo: UNI

Indo-US ties are poised to take a decisive turn under the Trump administration. Secretary of State Rex Tillerson, on his maiden visit to India recently, declared US intention to help India attain its full potential and be an ally of Washing-ton and Tokyo to maintain strategic balance in Asia. China’s growing economic and military power is a concern shared by all three countries.

“The US supports India’s emergence as a leading power and will continue to contribute to Indian capabilities to provide security throughout the region. In this regard, we are able and willing to provide advanced technologies for its military modernisation efforts…,” Tiller-son said at a joint news conference with External Affairs Minister Sushma Swaraj. All this is being done with an eye on China.

With the US ready to make India a partner in the new defence architecture of the region, strategic alliances in Asia are changing.

The US, Japan and India are the new trilateral partners. They are likely to be joined by Australia in a revival of the quadrilateral favoured by Japanese Prime Minister Shinzo Abe during his first short stint in the post. Chinese pressure led to the move fizzling out. But now, under Narendra Modi, Donald Trump and Abe, and with China’s belligerence, the move is in place.

A statement released by the Prime Minister’s Office after Tillerson called on Modi noted: “They affirmed that a strengthened Indo-US partnership is not just of mutual benefit for both countries, but has significant positive impact on the prospects for regional and global stability and prosperity.’’

The new alliances taking shape in Asia could not have been envisaged a few decades ago. India and the US were in different camps during the Cold War era. New Delhi was with the former Soviet Union, a major defence supplier and a country which remained a trustworthy partner.

During the Bangladesh war of liberation, Moscow had sided with Delhi, while Washington had ordered its Seventh Fleet to sail towards the Bay of Bengal in a show of support for Pakistan. When the Soviet army was in Afghanistan, India was behind Russia. In an attempt to get Russia out of Afghanistan, Pakistan was used by the US to arm, train and fund the Mujahideen. The CIA and Pakistan’s spy agency, the ISI, worked hand in hand to keep supply lines moving for the Mujahideen. Again, when Henry Kissinger made his secret trip to Beijing, he flew to China from Pakistan. All this is now changing.

China and Pakistan remain close, but now Russia’s Vladimir Putin also has one foot in that camp. The US, always suspicious of India because of its closeness to Moscow, is now willing to embrace it. Washington, as Tillerson said, is ready to provide technology to India, a nation it had earlier put under nuclear sanctions.

Though supporters of Indo-US ties are overjoyed at this new turn in relations, there are some who caution against over-optimism. There have been several false starts earlier.

With an unpredictable man like Trump at the helm, nobody can foretell what the future holds. Trump is visiting China in November. Much will depend on how that visit pans out. He is capable of changing policy or slowing down on the India angle if it suits his purpose. Also, it is not clear whether Tillerson himself will remain in the government. In the topsy-turvy administration that Trump runs, policies can be overturned in a jiffy. 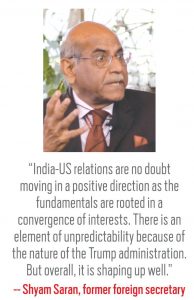 Former foreign secretary Shyam Saran told India Legal: “India-US relations are no doubt moving in a positive direction as the fundamentals are rooted in a convergence of interests. There is an element of unpredictability because of the nature of the Trump administration. But overall, it is shaping up well.”

The strategy to change the US-India equation by balancing China’s growing economic and military might with that of another big Asian power was first unfolded by President George Bush. His decision to sign the India-US nuclear deal and push it through the Nuclear Suppliers Group was with an eye to building strong, durable relations with Delhi. That shift in US policy towards India was a game-changer.

However, the UPA government under Manmohan Singh was not in any hurry to sign all the four foundation defence agreements that would have put Delhi firmly in the US camp. In fact, when President Barack Obama’s defence secretary, Leon Panetta, was in Delhi in 2012, he said that Washington regarded India as the “lynchpin’’ in its Asia strategy, which was aimed at countering China’s muscle-flexing in the Asia-Pacific region.

Former defence minister AK Antony, always suspicious of US motives, held back and delayed every decision that would have resulted in a more robust defence relation with Washing-ton. The Logistics Exchange Agreement, the first of the three defence pacts, was signed by India only in 2016. Antony had continued to drag his feet over it.

But Modi, a more pragmatic leader, is not forever looking over his shoulder to gauge the Chinese reaction. The Modi-Trump meeting in Washington earlier this year set the ground rules for engagement. India is willing to play ball with the US and how.

The Trump administration is now publicly declaring its decision to embrace India. This was done by Trump himself when he unveiled his new Afghanistan and South Asia policy in August.

Tillerson expanded on the theme in a seminal speech he gave in Washington before arriving in India and this is in line with America’s new approach. Tillerson said that China did not always play by international rules, especially in the South China Sea, while India had always scrupulously followed the guidelines. Washington under Trump is not at all afraid of loudly proclaiming its concerns.

With Beijing wooing India’s immediate neighbours and investing in a string of ports in the Indian Ocean, the fear of being encircled by China is very real for policymakers here. Besides this, Beijing’s recent moves on the Doklam front and the concern that all this could lead to more serious flare-ups persists.

China’s military is much better equipped than India and its border infrastructure is well-developed. In such a situation, having closer defence and strategic relations with the US will help. China has been eyeing the growth in these ties with some concern. Pakistan is also worried about New Delhi’s presence in Afghanistan, its backyard. The recent statement of Nikki Haley, US ambassador to the UN, that India’s presence in Afghanistan will help the US keep an eye on Pakistan’s moves, has not pleased Islamabad. However, policymakers in Washing­ton also know that without Pakistan’s help it would be difficult to work out a peace deal with the Taliban. Except for hotheads in India, the rest of the world realises that a stable Pakistan is good for the region and the world.

Tillerson at his news conference made it clear that Pakistan has to crack down on all terror groups, not just for Afghanistan or the US or India, but for its own stability and progress.