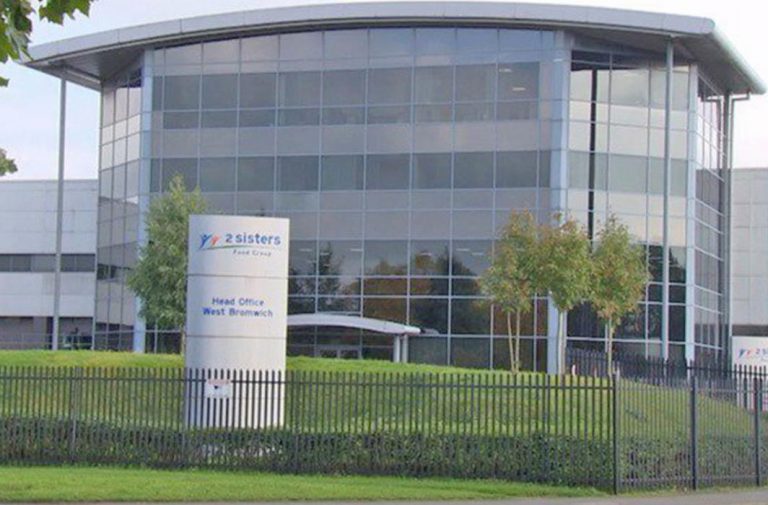 Above: 2 Sisters Food Group in UK produces a third of all poultry products eaten in the UK. Photo: courtesy Twitter

An Indian origin couple whose company is the largest supplier of chicken to supermarkets in Britain has been forced to shut down production after an investigation showed serious lapses of health and safety in their plants.

Ranjit Singh Boparan and his wife, Baljinder Kaur, own the 2 Sisters Food Group (2SFG), which is UK’s second largest food company and produces a third of all poultry products eaten in the UK. It claims to process around 6 million chickens every week. Supplying poultry is the core business of the couple’s sprawling GBP 3 billion food empire.

An undercover investigation carried out by The Guardian newspaper and ITV News—two of the most credible national news networks in the UK—revealed poor hygiene standards and food safety records being altered at the 2 Sisters’ main chicken processing plant in West Bromwich in the West Midlands. The joint sting operation which involved secret filming at the 2 Sisters plant over a period of 12 working days and interviews with the staff threw up a slew of lapses and violations of Britain’s very stringent food laws.

Workers were filmed accidently dropping raw chicken to the factory floor, picking it up and putting it back on the production line for packaging. Chicken portions which had been returned unsold from one major supermarket were repackaged by 2 Sisters and sent off to another retailer.

Workers were also regularly told to alter the records of where and when the chicken was slaughtered thereby fiddling the “use by” date and hindering authorities if they needed to recall contaminated meat.

The investigation also showed old chicken being mixed on the production line with fresh birds, thereby making a complete mockery of the company’s “use by” dates. All food products in Britain by law have to carry this date and retailers are not allowed to sell products which have crossed the deadline. In the case of chicken, the “use by” date is stamped on the packaging by the supplier and is typically 10 days after slaughter. Altering “kill dates” could artificially stretch the commercial life of the meat and dupe consumers. Fudging these dates is both illegal and dangerous.

“If you are placing a use-by date that is incorrect, that is a breach of law. If you place food on the market that doesn’t have the correct traceability information, that is a criminal offence,” said Dr Richard Hyde, an expert in food law at Nottingham University.

During the investigation, more than 20 workers at the plant were interviewed about the standards of the company and they gave damning replies. “I have (changed the slaughter dates) lots of times when I was working in that area. My supervisor, he asked me to do it…If you think you are buying fresh chicken, it can be older chicken,” said one worker on the TV footage. Another pointed out that quality control staff at 2 Sisters were doing a “pointless job” and were often intimidated and overruled by production supervisors who treated them like “enemies”.

As soon as the story was released on September 28, the five big supermarkets—Tesco, Sainsbury’s, Aldi, Lidl and Marks & Spencer—supplied by the 2 Sisters’ West Bromwich plant said they took quality and safety standards very seriously and launched their own investigations. “We operate to the highest possible food quality and safety standards, carrying out our own regular audits at all of our suppliers to ensure these standards are maintained. As such, we take these allegations extremely seriously and will be carrying out our own rigorous investigation,” said a spokesperson for Tesco. By the following day, they had stopped taking chicken from 2 Sisters.

A shocked 2 Sisters initially issued a statement: “2SFG ensures all staff are fully trained on hygiene and safety matters, and enforces a number of policies to ensure compliance with all regulations. It is subject to regular audits in these areas and staff have a number of ways in which to voice their concerns.” It further added: “2SFG has reviewed its records for Site D from the previous 12 months and there are no complaints from any quality assurance staff resembling those cited.”

However, Neil Parish, the chairman of parliament’s environment, food and rural affairs committee, announced that he would be calling Boparan to Westminster to answer questions about the footage. Parish suggested a “short, sharp inquiry” to restore food safety, animal welfare and consumer confidence to the massive chicken plants run by 2 Sisters.

“We would certainly head for the highest levels of the company and ask them to present evidence to us. We are producing chicken to a very high standard in this country. We have got to make sure that welfare and food safety through the processing plants are carried out properly. In this case, it is not and it has to be put right immediately,” said Parish.

The Food Standards Agency (FSA) also launched its own investigations into 2 Sisters. The FSA announced that it would be “liaising with the local authority in regards to taking the investigation forward and will consider whether offences have been committed”.

This investigation comes just four years after the horsemeat scandal which resulted in prison sentences for those convicted of a conspiracy to pass off cheaper horsemeat as beef. The prospect of the publicity-shy Boparan being called in front of parliamentarians and being hauled up for criminal offences made 2 Sisters change its tune quickly. Not wanting to fall foul of the law, Boparan began to cover his tracks.

On October 1, 2 Sisters announced that it was temporarily shutting down the West Bromwich plant for retraining its staff. “The FSA has been in daily attendance since the allegations were raised and confirmed that it has not identified any breaches. However, our internal investigation has shown some isolated instances of non-compliance with our own quality management systems. We have therefore decided to temporarily suspend operation at the site to allow us the time to retrain all colleagues,” said a spokesman for 2 Sisters.

Born in the small town of Bilston in the West Midlands, Boparan left school at 16 with virtually no qualifications and spent his early life working in a local butcher’s shop. In 1993, he founded the 2 Sisters Food Group in nearby West Bromwich with a bank loan. Today, the 51-year-old entrepreneur and his wife have an estimated GBP 544 million, according to The Sunday Times rich list.