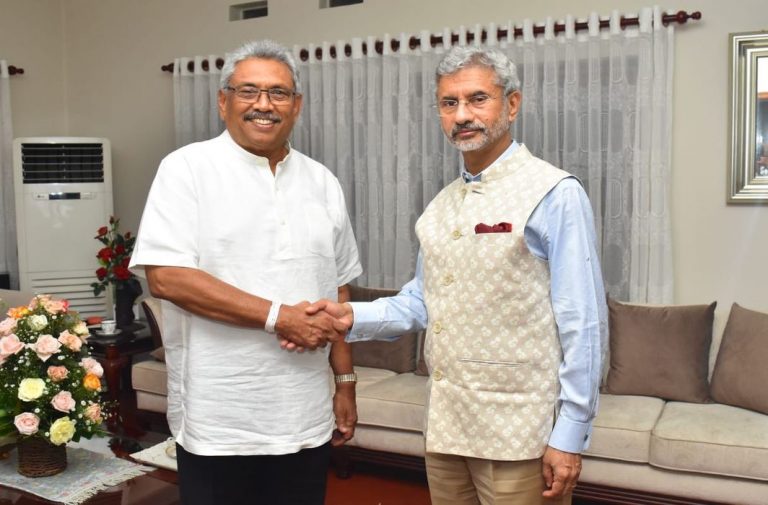 The victory of Mahinda Rajapaksa’s younger brother has made both the Tamils and the Muslims of Sri Lanka nervous. But India has started its innings with him on a positive note

The victory of Gotabaya Rajapaksa, younger brother of former Sri Lankan strongman Mahinda Rajapaksa, as Sri Lankan president was a given considering the poor performance of the previous Unity government. Gotabaya Rajapaksa, an ex-army man, was defence secretary over 2005-15 in his brother’s government and is largely credited for the military victory against the LTTE. Though a controversial figure, he is hugely popular with the Sinhala Buddhist majority in the island, especially in the deep south of the country. He rode to victory on the plank of providing a safe, terror-free environment amid creeping security concerns following the ghastly Easter bombings.

Considering that the previous government was weak and delivered little, the desire for a strong government by the people ensured Gotabaya’s win. The Unity government headed by President Maithripala Sirisena of the Sri Lanka Freedom Party (SLFP) and Prime Minister Ranil Wickremesinghe of the United National Party (UNP) was a disaster. Sirisena spent his time squabbling and plotting against his prime minister. The last straw was when information given by Indian intelligence agencies of a likely terror attack on Christians during Easter was not passed on to the PM’s office. More than 250 people were killed in simultaneous attacks on churches and luxury hotels. Though the ISIS later claimed responsibility, Colombo has always insisted that the strike was carried out by a local Islamic group. Following the killings, Muslim shops and businesses came under attack by Sinhala Buddhist mobs. So the desire for a tough, no-nonsense government was understandable and Rajapaksa offered just that. National security is number one on his agenda.

But all are not happy with the return of the powerful Rajapaksa family. Minority Tamils, who voted overwhelmingly for his opponent, Sajith Premadasa (son of the assassinated former president, Ranasinghe Premadasa) are concerned over his victory. Tamils have long held that the Rajapaksas, including Gotabaya, were responsible for large-scale human rights abuse during the last days of the military campaign against the LTTE. The cold-blooded murder of Prabhakaran’s young son while in the custody of the Sri Lankan forces was a blot on the military. A chilling video showed the child happily munching on a biscuit and next, as dead. Besides the Tamil minorities, even Muslims are worried. Soon after the Easter Sunday bombings, Muslims bore the brunt of Sinhala anger. Free-thinking liberals are just as unhappy. During Mahinda’s presidency, dissent was not tolerated. Those who spoke out were often killed. Many suspect that journalist Lasantha Wickrematunge was killed by government forces. Cases against this murder and another by Tamil survivor Roy Samanthan were filed against Gotabaya in the US. Now that he has given up his US citizenship, it is not known what happens to these suits.

Gotabaya broke tradition to take oath not in Colombo but in Ruwanweliseya in Anuradhapura in central Sri Lanka. That was a symbolic message to his support base. Anuradhapura was the capital of several powerful Sinhala kings, including the legendary King Dutugamunu, famous for defeating a Tamil king nearly 2,000 years back. Dutugamunu is a symbol of Sinhala valour. The Rajapaksas are popular among the majority of Buddhist monks. Gotabaya said during his oath-taking that his success was due to the “extraordinary blessings of the Buddhist monks”. He went on to thank his Sinhala loyalists: “The main message of the election is that it was the Sinhala majority vote that allowed me to win the presidency.” He added: “I knew that I could win with only the votes of the Sinhala majority. But I asked Tamils and Muslims to be a part of my success. Their response was not what I expected. However, I urge them to join me to build one Sri Lanka.” Whether the minorities are reassured remains to be seen.

This 70-year-old brother of Mahinda Rajapaksa began his career in the Sri Lankan army in 1971 and retired as lieutenant colonel. During his service years, he picked up a master’s degree in defence studies from Madras University. As an armyman, he served both in the northern and eastern provinces and gathered valuable experience. This understanding was useful when he became defence secretary in planning strategy against the LTTE. He won several medals for exceptional bravery. He attended training courses in India, Pakistan and the US while serving in the army. After retiring in 1991, he did a post-graduate diploma in information technology from Colombo University. He left for the US and worked as an IT professional in Los Angeles. He also acquired US citizenship. He returned home to join his brother’s government when Mahinda won the 2005 presidential polls. However, his US citizenship proved a major hindrance in his bid for presidency. Mahinda, debarred from holding office as an executive president, cannot serve two terms, and his bid to become prime minister was scuttled by the Supreme Court. So the family chose Gotabaya over Basil (another brother who served in the cabinet) as he is immensely popular. So he gave up his US citizenship and was allowed to contest the elections. His only son and daughter-in-law are still working in the US.

Prime Minister Narendra Modi was first off the block in congratulating Gotabaya. He called him personally and tweeted: “Congratulations @GotabayaR on your victory in the Presidential elections. I look forward to working closely with you for deepening the close and fraternal ties between our two countries and citizens, and for peace, prosperity as well as security in our region.” The Sri Lankan leader immediately replied: “I thank Prime Minister @narendramodi and the people of India for your warm wishes. Our two nations are bound by history and common beliefs and I look forward to strengthening our friendship and meeting you in the near future.’’ Modi also invited him to visit India as soon as he could make time. The invitation was accepted.

India has wasted no time. External Affairs Minister S Jaishankar arrived in Colombo on November 19 for a meeting with the new president, the first foreign minister to do so. He tweeted later: “A warm meeting with Sri Lanka President @GotabayaR Conveyed PM @narendramodi’s message of a partnership for shared peace, progress, prosperity & security. Confident that under his leadership, #IndiaSriLanka relations would reach greater heights. President @GotabayaR has accepted PM@narendramodi’s invitation to visit India on 29th November.”

Gotabaya appears ready to forget the past. Many in India are nervous about another tilt towards China. It may be recalled that during President Mahinda Rajapaksa’s second term in office, China spread its wings across the island nation. Considering that Sri Lanka is a stone’s throw from India’s coastline, Delhi is apprehensive. A Chinese submarine docked in Colombo in September 2014 and again in November 2014 despite India’s unhappiness. Colombo said it was a routine refuelling visit, as the PLA vessel was on its way to Aden. Delhi was spooked. The then government had also allowed China to build and operate Hambantota Port. There was also a major Chinese investment to modernise the Colombo port and build a financial and business centre. This gave the impression in India that the Rajapaksas were pro-China.

Things changed after Mahinda’s defeat in 2015. The new government was much more open to Delhi. At the same time, he lost no time in repairing ties with India and made it a point to meet Modi every time he visited India in his personal capacity. India also made sure that it had ties with all parties in the island state instead of hitching its wagon to just one party.

As for Chinese influence in Lanka, it will remain. Despite loud protests by the Opposition over the Colombo port and the city project being handed to China, the Wickremesinghe government continued with the earlier plan. When big money is involved and China opens its cheque book, it is difficult for most nations to turn their backs on it.

Delhi should not be stuck in the past. Modi’s telephone call shows that he is willing to make a fresh start. Gotabaya has also stressed that his foreign policy will be “neutral’’ as the island state does not want to be caught between two global powers. This is music to Indian ears. But whether he actually does this remains to be seen. Also important would be Gotabaya’s relationship with the Tamils. Can he be magnanimous and forget that none of the minority groups voted for him? Or will he turn against them? Any action on the Tamils will reverberate in Tamil Nadu. India will be watching carefully. But for now, both sides seem willing to forgive and forget. Sending Jaishankar to Colombo was a smart move and shows that Delhi is ready to begin a new chapter.