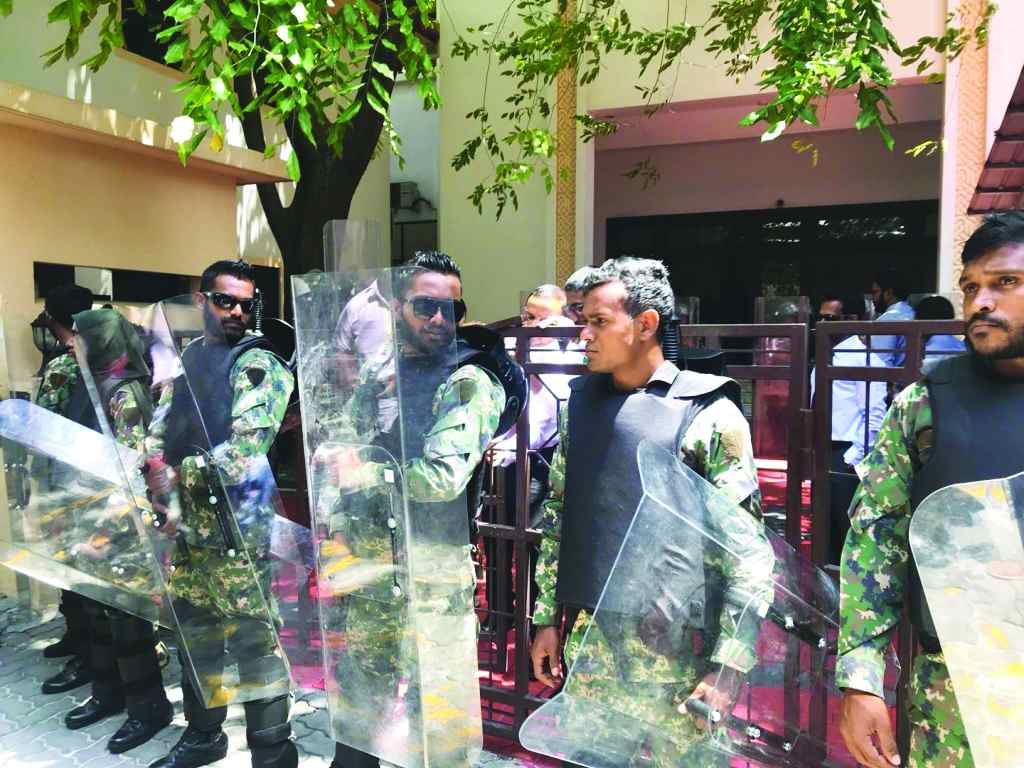 Above: Soldiers guard the parliament in Male post declaration of emergency by the president/Photo: avas.mv

Round one of the political crisis in Maldives has gone to President Abdullah Yameen, a dictator who has battered all democratic institutions in the island. He has locked up political opponents, arrested the chief justice of the Supreme Court and another senior judge and arrested the ageing former president Maumoon Abdul Gayoom. The democratic opposition in the island nation has looked to India, its closest neighbor, for decisive action and is sorely disappointed at its refusal to intervene.

The cautious wait and watch approach that Delhi adopted has allowed Yameen to consolidate his position. What is more, China has openly sided with Yameen and warned against “outside” interference in the domestic politics of the nation. An obvious reference to India.

Opinion in India is sharply divided over what its options are. Should it have had boots on the ground? Or sent a special envoy for a preliminary on-the-spot assessment of the ground situation, thereby sending a signal that as a neighbouring country, it would not allow democracy to be subverted? This is more so because the opposition, including former president Mohamed Nasheed who is now living in exile, had appealed for armed intervention. Many believe it would have been a good chance to also remove a pro-China president from the scene and ensure that Beijing’s wings are clipped here. Most foreign policy experts believe that Delhi should have been more proactive. 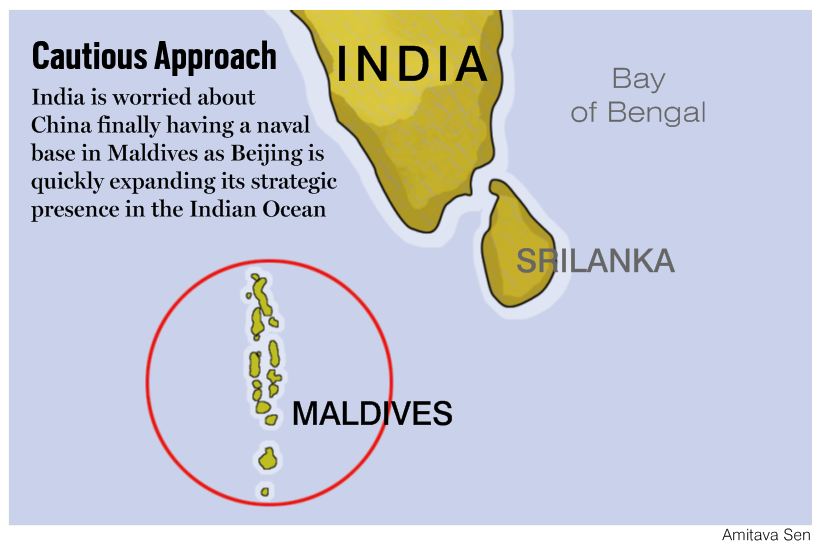 “India has missed the bus,” said former foreign secretary Lalit Mansingh. “This is what I call cogitational diplomacy,” he added. As soon as Yameen declared an emergency, arrested the chief justice who had given a ruling asking for all jailed political opponents to be released, and got security forces to man important installations, India should have done something. More so because the opposition was looking for help from it. “Former president Nasheed’s appeal should have been the turning point. In such a situation, speed is of utmost importance. A government cannot wait and keep mulling over what to do,” said Mansingh.

By procrastinating, Delhi gave Yameen enough time to arrest the chief justice and another judge as well as get his own judges to declare the former ruling null and void. Mansingh said that the least India could have done was to immediately dispatch a special emissary to Male for a thorough review of the situation. He should have been instructed to brief the Male government on India’s concerns and the need to quickly diffuse the crisis by freeing the chief justice as well as Gayoom. “This way, India’s presence would have been felt and kept it relevant. It would also have been a clear message to China that this is India’s call,” the former foreign secretary said.

In a second appeal on February 7, Nasheed, the leader of the Maldivian Democratic Party, tweeted: “Saying ‘resolve things internally’ is akin to asking us to escalate the revolt, which can lead to chaos. Maldivians see India’s role positively: in 1988 they came, resolved the crisis, and left. They were not occupiers but liberators. This is why Maldivians look to India now.” Earlier on February 6, Nasheed had appealed for India’s “physical presence” and requested “an envoy backed by its military” to release the jailed judges as well as Gayoom.

The sweep of arrests by the government is spreading and special envoys are being dispatched to friendly nations like China, Pakistan and Saudi Arabia to brief them on the crisis. Male had wanted to send an envoy to Delhi too but India declined the visit, thereby giving the Yameen government a snub over his refusal to heed the supreme court order.

Yameen was undemocratic from the start. Many questions were raised over his victory in the presidential elections of 2013. Nasheed and his supporters believe it was a “stolen” election. With no candidate receiving the required number of votes, a re-run of the polls was ordered. Yameen won the run-off, with his share of the vote rising from 30 percent in the first round to 51 percent in the second round. In comparison, Nasheed’s share increased by only two percent between the rounds.

Since taking office, Yameen has systematically jailed opponents on false charges. In 2015, he brought in terror charges against Nasheed and threw him into prison. Prime Minister Narendra Modi cancelled a scheduled trip to Male to register Delhi’s protest over the trumped-up charges.

Meanwhile, Yameen has been steadily coming closer to China, which has spread its wings across the archipelago. One of Yameen’s first acts as president was to throw out GMR, the Indian infrastructure company which was to modernise and run the international airport in Maldives. GMR was awarded the contract by Nasheed when he was president. Yameen invited the Chinese to takeover the project.

China has invested hugely in the island, and Chinese tourists now flock to the Maldives, adding substantially to its revenue. India is worried about China finally having a naval base in Maldives as it is quickly expanding its presence in the Indian Ocean. In December, Nasheed signed a free trade agreement with China and passed it in parliament without informing the opposition. Delhi-Male ties have been tense. But there were signs that both sides wished to repair the damage. Yameen’s foreign minister Mohammed Asim was in town last month to assure India that Male’s leadership was committed to an “India First” policy. Delhi was given the assurance that Maldives would take India’s concerns on board.

However, the recent Supreme Court order declared that the 2015 trial and sentencing of Nasheed on charges of terrorism was unconstitutional and ord­ered the release of political leaders jailed by the regime. If Yameen has obliged the court, opposition lawmakers would have reduce his government to a minority in the Majlis. President Yameen declared a state of emergency, removed the offending judges and got a willing judiciary to revoke the previous order.

Many in India are worried about the consequences of Delhi’s failure to act against Yameen. The message that will go across to India’s friends in the region is worrisome. India would be seen as a power which is not willing to act on behalf of its democratic allies. Moreover, Modi’s image of a decisive leader is also taking a beating. Quick action by India to free the captives would have sent out the right message, not just to the neighbourhood, but also to China.

But at the same time, interfering in the domestic issues of another country could boomerang on Delhi. In 1987, when India sent troops to Sri Lanka’s eastern and northern provinces, not much was gained. The minority Tamil population which looked up to India was angry. Finally, the LTTE and former president Premadasa joined forces and ordered the Indian armyout of the island. Rajiv Gandhi was killed by an LTTE suicide bomber.

Strong-arm tactics backfired in Nepal too when Delhi imposed a blockade. Diplomacy is a tough call and can go either way.

For the moment, India is consulting with the US, the UK, EU and Saudi Arabia. What happens next is uncertain. But Delhi has let go of a golden opportunity to regain space from China in its own backyard.