India’s traditional ties with Maldives, which had taken a downturn, are likely to improve after Modi’s visit to this important neighbor. Terrorism, maritime security and China’s growing influence are concerns for both countries

Prime Minister Narendra Modi had chosen Maldives as his first port of call as he begins his second term in office. Why Maldives? For one, the “neighbourhood first” policy of his government comes into play, but more than that, Maldives is a vital cog in the geo-politics of the Indian Ocean. At a time when China is making forays into India’s neighbourhood and Chinese vessels and warships are frequently plying the Ocean, New Delhi hopes to counter this by reaffirming its pivotal role in this strategic island state.

Modi has been off from June 8-9 and will stop over in Sri Lanka on his way home. Sri Lankan President Maithripala Sirisena had invited him when he was here to attend the swearing-in of the PM and his cabinet. As an island nation, Sri Lanka is as important for India’s maritime security. Here too China’s footprints are large.

“We want to make sure that the current status quo is maintained. No country should control the choke points in the Indian Ocean and the freedom of navigation must continue,” a senior Indian official who did not want to be identified said. The choke points include the Straits of Malacca and Hormuz and Bab-el-Mandeb.

Developing close political and economic ties with the Maldives, Sri Lanka, Seychelles and Mauritius are essential for India’s attempts to guard its turf from China’s increasing presence in the Indian Ocean.

Indian analysts have long discussed China’s attempts to checkmate India with its String of Pearls doctrine. Simply put, it is Beijing’s wooing of island nations across the Indian Ocean through friendly governments which could result in establishing military bases. From Gwadar Port in Pakistan’s Balochistan province, to Hambantota in Sri Lanka’s southern tip, to building a container shipping facility in Bangladesh’s Chittagong Port, to establishing a deep sea port in Myanmar’s Kyaukpyu, China is everywhere hemming in India in its neighbouring waters. Besides, China has established its first overseas military base in Djibouti on the Horn of Africa, raising alarm bells in India. But Djibouti also hosts one of the largest American bases. France, Italy and several other European nations have bases in Djibouti. Americans also have a large base in Diego Garcia and France in Reunion Island in the Indian Ocean. 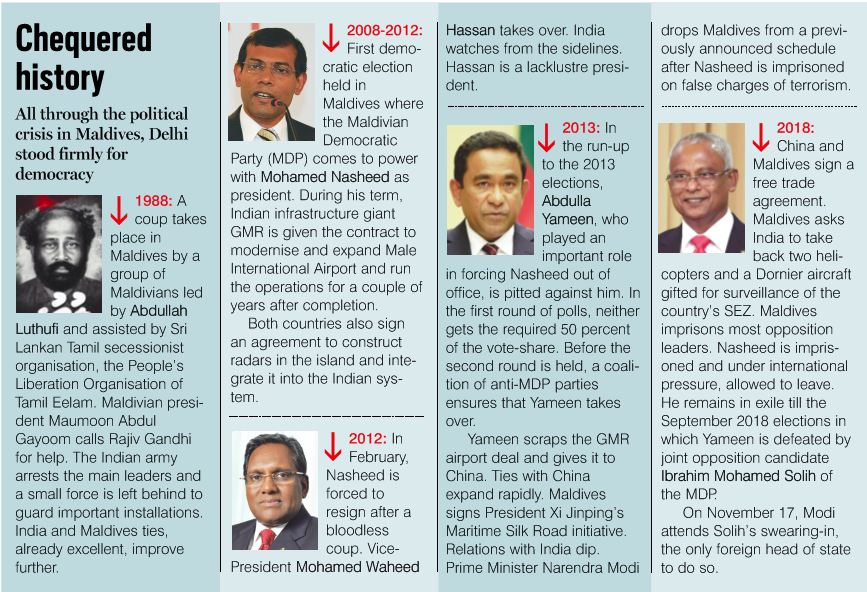 China maintains that its growing naval reach across international waters is not aimed at any country but is mainly to ensure that the shipping lines are secure for its expanding trade and guarding its assets. Few take China at its face value.

India’s concern is mainly about Gwadar. That can, in time, be an important military and naval base for China, considering its close all-weather friendship with Pakistan that is strategic to both countries.

Not that India is sitting back and allowing a Chinese walkover. Indian officials explain that India is not on the lookout for naval bases in the waters close to the coastline. The navy, unlike the Chinese navy, is operating in the Indian Ocean close to its own shoreline. The distance the navy has to cover is much shorter.

An ambitious plan to set up a network of coastal surveillance radars along Maldives and Sri Lanka down to Mauritius is being implemented. The idea of setting up a system of radars connected to a central network in India took root after the Mumbai terror strikes of 2008. The attackers came by sea. The need for greater vigilance on the Ocean was acutely felt then.

In August 2009, UPA defence minister AK Antony signed a pact with Maldives when Mohamed Nasheed was president to keep a record of vessels plying the Indian Ocean around Maldives.

It was also to assist Maldives in the crucial tasks of safeguarding and protecting its vast exclusive economic zone and helping to develop and enhance maritime surveillance and aerial mobility capabilities.

Maldives does not have its own navy. India agreed to set up a network of 26 radars across its 26 atolls to be linked to the Indian coastal command. In addition, India was to establish an air force station from where Dornier aircraft would carry out surveillance flights. The station was to host a few Indian military helicopters. The work got delayed due to political unrest in the Maldives. But by 2011, things were underway.  New Delhi began to increase maritime domain awareness in the waters around India and the neighbouring island states.

The arrangement brought Maldives into India’s coastal security set up. Today, India operates around 50 radars along strategic points on its coast as well as spots in the Maldives and Sri Lanka.

All this was threatened when Maldivian President Abdulla Yameen turned hostile and began promoting China in a large way. He asked New Delhi to take back the helicopters and virtually reversed the loose defence agreement signed in Nasheed’s term. Luckily for Delhi, the tide turned last year when Yameen was voted out in national elections.

India had supported the MDP all through the Yameen term. In fact, Prime Minister Narendra Modi in 2015 dropped Maldives from a four-nation trip to Sri Lanka, Seychelles and Mauritius following the arrest and imprisonment of Nasheed by the Yameen government on alleged terrorist charges. The MDP welcomed the move. All through the crisis, Delhi stood firmly for democracy and the freeing of political prisoners. Yameen’s actions against political opponents was criticised worldwide.

Now with the MDP in power, India is going to make sure that political ties are strengthened. The PM is likely to announce some large development assistance during this trip. Terrorism will also be an important element of the conversation. The Easter Sunday terror attack in Sri Lanka once again highlighted that South Asia may be the next battleground for terror outfits like ISIS, Al Qaeda and others.

Unlike Sri Lanka, Maldives is a Sunni Muslim country. It is also well-known that Saudi Arabian money has come into mosques in Maldives, much as it has done in Lanka.

Many young men from Maldives have joined the ISIS. Now with ISIS on the run, some of these men are likely to head home and establish networks not just in the Maldives, but across South Asia. India will definitely be on their radar. The MDP government is likely to take India’s help in fighting terror.

The Colombo massacre too could have been prevented had it taken an Indian intelligence tip-off seriously. Much can be achieved if governments in the region work together against a common menace.

Modi’s decision to make Male his first foreign destination will certainly go down well with Maldives. India needs to do as much as it can to ensure that the two countries become stakeholders in development. If that happens, whichever government comes to power, the equation does not get ruffled. There will be no vacuum for another power like China to step in.